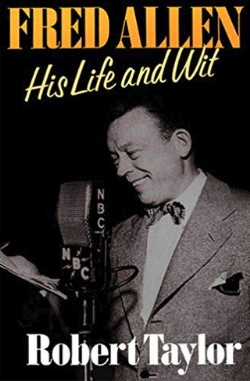 A portrait of the great radio comic follows his rise to popularity from vaudeville–where he appeared as “World’s Worst Juggler”–to the Broadway stage, and on to “Town Hall Tonight”–his wildly popular radio show.

For two decades Fred Allen, “the man with the flat voice,” was America’s most brilliant radio humorist, and for a time his program was the most popular in the country. This appreciative biography, enlivened by hundreds of quotations from Allen’s books, journals, letters, scrapbooks, and scripts, follows the career of Boston-born John Florence Sullivan (1894-1956) from his early days as a vaudeville juggler to his subsequent appearances as a Broadway comedian, culminating in his 25 years of national prominence. Boston Globe art and book critic Taylor ( Saranac ) discusses Allen’s meticulous working methods, his longstanding “feud” with Jack Benny, his happy marriage and working relationship with Portland Hoffa, Allen’s wife of 27 years, and the characters he used to interview in Allen’s Alley : Ajax Cassidy, Sen. Beauregard Claghorn, Titus Moody, Mrs. Pansy Nussbaum and Falstaff Openshaw. Allen’s cleverness and wit, his preeminence as a master of pace and timing, acknowledged and proclaimed by the likes of James Thurber and Groucho Marx, are fully represented in this delightful, distinguished biography.

Unlike Jack Benny, his long-time contemporary, Fred Allen is perhaps almost forgotten today, except for those who grew up listening to the radio for an evening’s entertainment. He was, nevertheless, one of the leading radio comedians of the 1930s and 1940s. This book covers Allen’s roots in Boston, his days of vaudeville and Broadway revues, and his coast-to-coast success on radio. Television was his downfall, however, and nearly overnight his type of humor, shrewd and sardonic, became passe. This book is very much worth reading, but its excerpts from radio scripts really do little more than suggest what it was that made Allen so funny. Listening to tapes of Allen’s actual broadcasts would give a better sense of his remarkable style.

John Florence Sullivan (May 31, 1894 – March 17, 1956), known professionally as Fred Allen, was an American comedian. His absurdist, topically pointed radio program The Fred Allen Show (1932–1949) made him one of the most popular and forward-looking humorists in the Golden Age of American radio.[1][2]

His best-remembered gag was his long-running mock feud with friend and fellow comedian Jack Benny, but it was only part of his appeal; radio historian John Dunning (in On the Air: The Encyclopedia of Old-Time Radio) wrote that Allen was radio’s most admired comedian and most frequently censored. A master ad libber, Allen often tangled with his network’s executives (and often barbed them on the air over the battles) while developing routines whose style and substance influenced fellow comic talents, including Groucho Marx, Stan Freberg, Henry Morgan and Johnny Carson; his avowed fans also included President Franklin D. Roosevelt and novelists William Faulkner, John Steinbeck and Herman Wouk (who began his career writing for Allen).

Allen was honored with stars on the Hollywood Walk of Fame for contributions to television and radio.[3]

To purchase the book on Amazon go here!