While visiting Paris recently to photograph the delightfully funny clown Rob Torres I came across a wonderful place that could only be possible in PARIS!

After discussing this wonderful place with a few friends I discovered that my dear friend Karen Gersch has been ‘hanging out’ at the Clown Bar for years.

I asked her to write this blog post for me. She consented! So here is Karen Gersch.

If one turns right onto Rue Amelot after leaving Cirque d’Hiver and walks two elephant lengths, there appears the rather plain portal to one of Paris’s best kept secrets: “Le Clown Bar”.  To step through these doors is to find oneself in an unheralded palace: the world’s smallest musee de clown.

Behind the long curved wooden bar, the walls gleam with handpainted enamel tiles of augustes and whitefaces caught in classic reprises.  The very same motifs are repeated in the plates on which meals are served; the wine glasses are etched with acrobatic figures, too.   Look up: a large circular painting of clowns looms from the heart of the otherwise Art Deco Fleur-de-Lis ceiling.  There is nowhere the eye can move without resting on photos, sculptures, drawing, canvases, vintage posters or knick-knacks depicting world-class buffoons.  Most of them are portraits: recognizable and legendary, of those who have frequented the bar throughout the century.

Le Clown Bar is registered as having opened in 1902, the creation of one Jean-Baptiste Menery, who conceived the original imagery woven into the walls and ceilings.  Joe Vitte, the current proprietor, is the fifth owner, and with his wife, daughter and sister, have run it for more than twenty years.  From its earliest days, this charismatic café has served as a meeting hall for circus clowns from around the world.  It once even served as home for the three clowns whose black and white photos hang near the windows; that trio lived upstairs.

In the early 1990’s, when I first came to attend the much regaled “Festival Mondial du Cirque de Demain” at Cirque d’Hiver, I was not aware of this little phenomenon set in its shadow.  Caroline Simonds, longtime friend and once-partner had already founded her stellar company “Le Rire Medecin”, which placed clowns in hospitals throughout Paris.  Her repeated descriptions of the Festival and the creative luminaries who atttended got my envy bone jiggling.  I was also longing for new inspiration for my paintings.   Having told other circus friends around the globe I would finally be going to Mondial, the universal response was: where can we meet?

It is one thing to enter Cirque d’Hiver, a permanent circus building in France, reputedly built for Napoleon.  A perfectly round building, with glass display cases built into the curved lobby walls which hold old programs and artifacts, props and photos of the Bouglione Family.  But the first time entering into the inner hall is not just enchanting, it takes the breath away.  The deep red velvet drapes of it’s ringside tiers, the steeply raked seats that hurtle down to its carpeted ring, with white stairs rising above the facade to a balcony where the orchestra holds court.   You can feel the weight of time and sense the unearthly descendants who have spun and tumbled here.  It is only fitting that these two aesthetically magical places: Cirque d’Hiver and Le Clown Bar, neighbor each other.

Having picked up my festival tickets a bit after five that first night,  (the show was scheduled for nine) I strolled down Amelot, arriving just as the cafe’s metal doors rolled up on their tracks.  And once again stood transfixed at a remarkable inner world.  Tall, leather-seated stools lined the long bar, and a bustle of closely set tables filled the front and back areas.  There were shelves and glass-fronted armoires filled with clown souvenirs, figurines, pottery, toys, novelties and signs.  Perhaps because of the coppery ceiling, the room seemed to glow with sun blessed lighting, soft and intimate.

As I stepped inside, Joe met me and announced they weren’t quite open.  I nodded and asked if I could just sit and look.   I think my obvious fascination amused him.  His strongly featured face intrigued me.   I inquired if I could reserve a table, as I had friends coming to join me after 6 or so.  He told me no.  They never took reservations.  Then pointed me to a small table across from the bar.  He returned to setting up and I immediately pulled out my sketchbook and drew him at work.

I needed a good warmup for the drawings I would rattle out at the Festival later.  And my favorite way to sketch is innocuously blending in with domestic activities.  I made studies of several objects in view, then of the waiter and a young woman who had appeared.  At one point, the woman approached and placed a glass of wine on my table.  I tried to explain that I hadn’t ordered one. She pointed to the pages beneath my hand, smiled and walked away.

The first of my friends  who showed up that night were Brazilian acrobats; we ate dinner, and ploughed through two bottles of wine.  By then I was joking with the waiters and woman who had served me.  At a quarter to nine, I asked for the bill and left as tip, a generous amount of francs plus most of the portraits I had done.

It was amazing to see, over the course of those four hours, how the bar had filled to capacity; when I left there were people still waiting outside in long trails down Amelot.  Circus performers, circus directors, booking agents, the ring crew, television crews, animal trainers, journalists…  Of course, the fuller it got, the less people took any notice of the stunning archives of art all around. 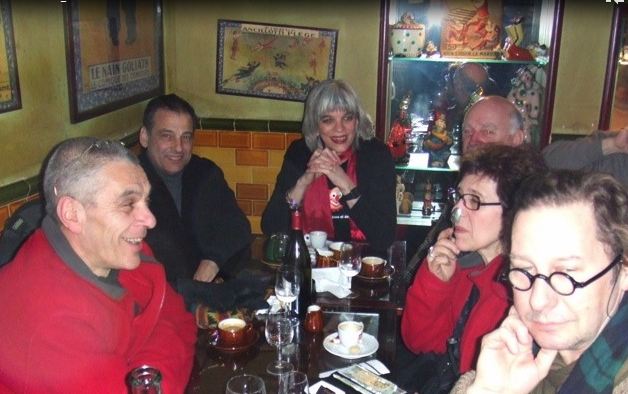 Directly after the show that night, I returned to the Clown Bar and stayed until closing, sharing with Joe and his daughter, Myriam (the kind woman who had served me) my sketches from the show.  I was maybe slightly drunk on wine, more so on the imagery that had bombarded me that night.

The following evening, when I returned at 5:30, the doors of Le Clown Bar were already open.  A lone and formal “RESERVED” sign graced the table where I had sat the night before.  I noted it, puzzled and slid into a nearby seat instead. Then Myriam appeared, scowling.  “Whattt?”  I said.  (I’d been trying to teach her Brooklynese the night before).   “Eeet EEESe for YOU”, she scolded, pointing to the sign.

Thereafter, every night when I stepped into Le Clown Bar – no matter how crowded and thick with patrons, that table sat untouched with its small “RESERVED” sign.  Once I entered and sat, the sign was whisked away and a bottle of the house Gamay placed in front of me.   I dined there each night, eventually joined by a myriad of friends from other countries.

So began my longtime friendship with the Vitte & Dub family, which has continued to this day.  Le Clown Bar became my studio away from home, where I warmed up my quick-sketch hands each night before friends appeared to dine and drink with me until the show.  Years later, when Myriam took up my offer to visit New York and came to stay with me on the Bowery, she called my loft Le Clown Bar II, marvelling at my own treasure trove of clowns and odd circus paraphanalia.

The Festival Mondial, originally founded by Dominic Mauclair, has  changed hands over the past decade, and no longer resides at Cirque d’Hiver.

Pascale Jacobs (another noted historian and costume designer, whose clients include Ringling and Cirque du Soleil) runs the Festival out of his own 5,000-seat tent, Cirque Phenix, in a park quite a distance away.

The Bouglione family keep a constant roster of prestigious shows running at Cirque d’Hiver (hosting most of the professional circuses that come to France.  The feature film, “The Devil wore Prada”. shot many of its end scenes inside the building.)   But the absence of the Festival Mondial has had a big impact on Le Clown Bar’s business, not to mention the generally poor economic climate that has prevailed.   Myriam left Paris to start a family – Joe had depended on her support and management skills since she was a teen.   During Festival week, the bar still draws late night contingents of directors and executives from famed circuses, from Roncali and Knie to Ringling and Cirque de Soleil.  They find their way back to Le Clown Bar after the Phenix shows finish each night.

But Joe now fears for the future.

He is hoping that the city will make good on its recent promise to give the bar landmark or museum status to preserve its unique artistry.

Its reputation stands not only as an unusual and brilliant homage to the world of Clowns; the restaurant is very well regarded for its native cuisine and traditional French dishes.  Both the food and wine menus, under Joe’s direction, have earned him a strong neighborhood clientele and followers outside the world of circus.

Circus buffs or not, anyone who ventures to Paris and wishes to step into an enchanting old world café, to sip an excellent glass of wine or nurse a rich expresso while musing over wonderful art, should make Le Clown Bar a starred designation.   Be sure and ask for Joe and tell hiim “Karen” sent you!