This blog post is authored by our Berlin Correspondent Victoria Linchong. 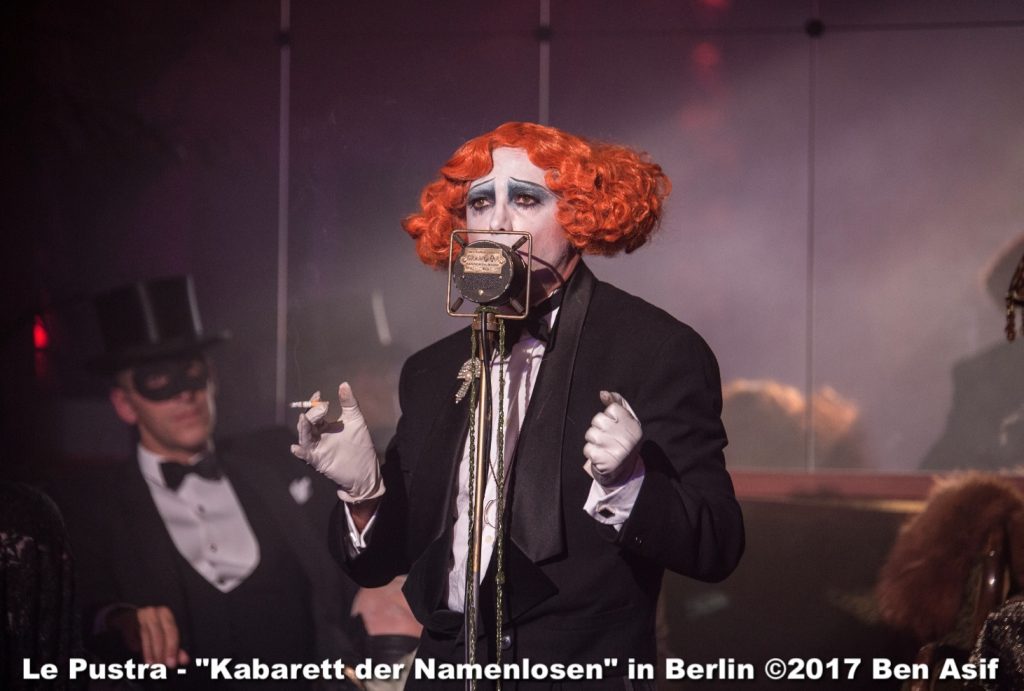 For most of the world, the mention of Berlin invokes a decadent underworld of androgynous women in beaded gowns and men in monocles smoking from ebony cigarette holders while Marlene Dietrich straddles a chair and tosses out a saucy song. But you would be quite disappointed if you were trying to find that vanished world in Berlin today.

True, state-run varieté exists in every city, but these are mainstream family-friendly dinner theaters. They are not the underground cabarets of the Weimar era with its barbed political satire and transgressive sexuality. It’s hard to believe, but with the Nazis and the war followed by the division of the city, it’s only now that Berlin is recovered enough to start revisiting the legacy of its underground cabarets.

The glamorous mother of all Goldene Zwanziger parties in Berlin is the Bohéme Sauvage and that only began in Else Edelstahl’s apartment in 2006. The following year, neo-burlesque found its way from New York City to a Berlin tiki bar and this activated a new generation of underground cabaret. Since then, a dozen or so burlesque and cabaret shows have opened in various bars in Berlin, most notably Pinky’s Peepshow and Fête Fatale at Bassy Club, and Sunday Soirée at Primitiv. One of the latest and most exciting additions to this burgeoning scene is the Kabarett der Namenlosen, which premiered in Berlin two years ago. Invoking the unsettled ghosts of Weimar cabaret, it almost immediately was a legendary hit. 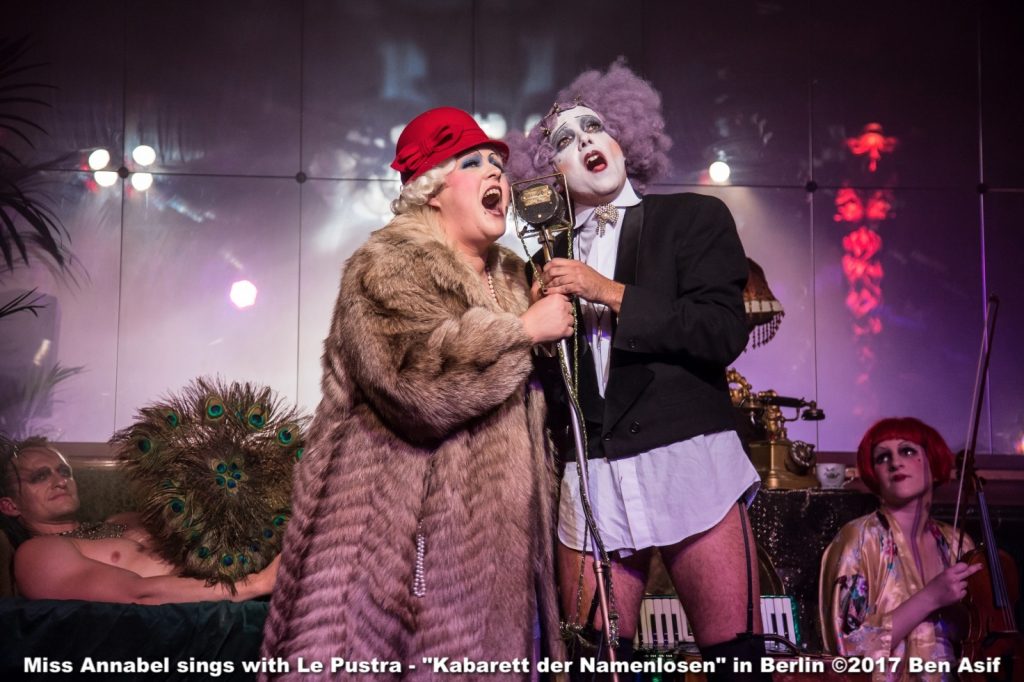 Kabarett der Namenlosen is the brainchild of Le Pustra, a performance artist originally from South Africa who performed for many years in London. On a visit to Berlin in 2012, he took a walking tour through Christopher Isherwood’s haunts in West Berlin. The tour guide mentioned the Kabarett der Namenlosen, a notorious open stage of the 1920s, where amateur performers were often reduced to tears by malicious audience members. Le Pustra was struck by the evocative name and after moving to Berlin, he set about creating a cabaret-theater piece around the idea of the nameless lost performers of the Weimar era.

Kabarett der Namenlosen is essentially a classic varieté revue with several international performers doing their signature acts loosely framed by a story. But it’s a vastly different experience from any other varieté in Berlin, with its lush visual style, copious nudity, and dark subject matter. Yes, there are plenty of comedic moments – a British Music Hall number with Miss Annabel Sings, a gag with Julietta la Doll as a telephone sex operator. But Le Pustra also plays a drag artist who is betrayed by a friend (performance artist Reverso) and London burlesque sensation Vicky Butterfly is heartrending as a flighty party girl who accidentally overdoses on cocaine. It’s an immersive experience that leaves you feeling like you’ve somehow traveled back in time to 1930, went on a bar crawl from the Kadeko to the Weiss Maus to the TingelTangel, and got to know some of the fragile and needy nightlife denizens of that fleeting time period. 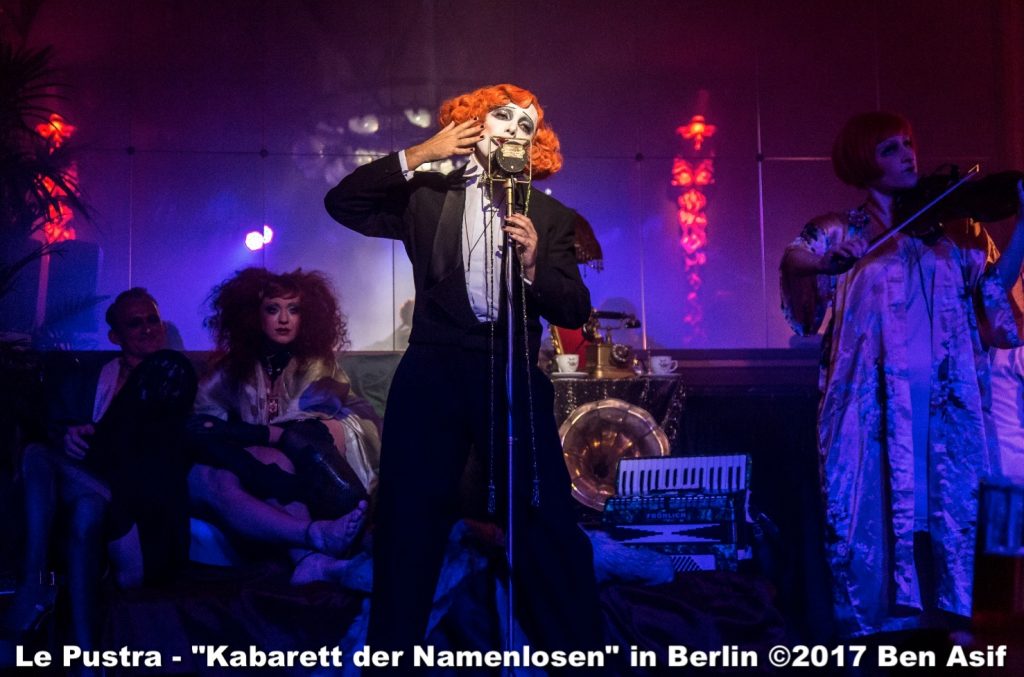 The most evocative moment in this cabaret-theater piece comes at the end. The audience is given little pieces of paper with what looks like a German poem and the cast comes out with a large board with the same writing. Le Pustra begins to recite the English translation: 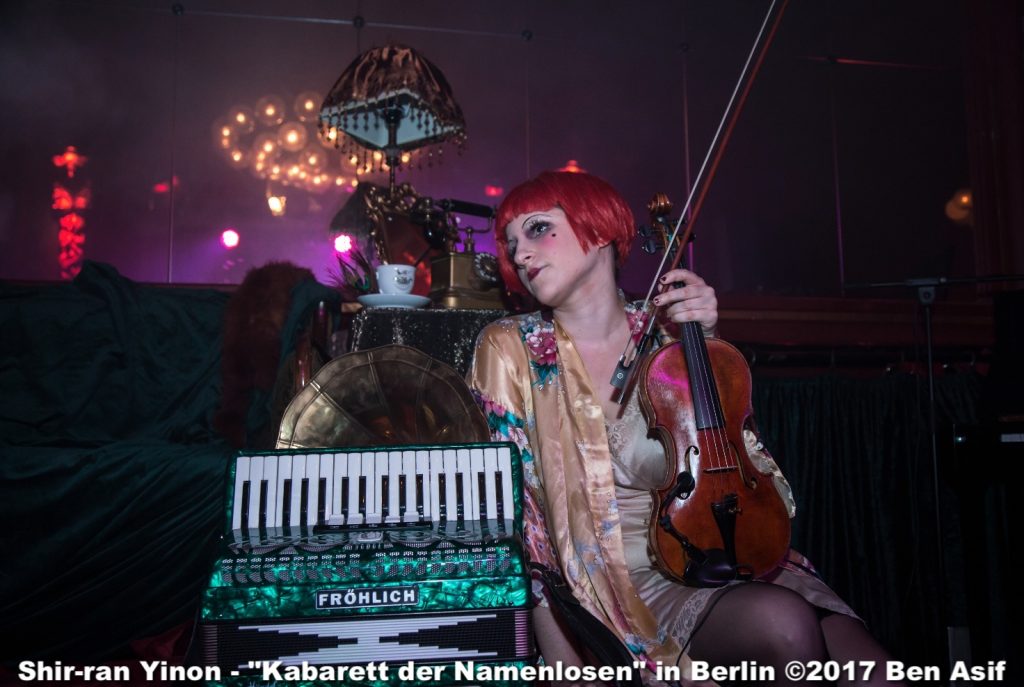 These are the lyrics to Das Lila Lied (The Lavender Song), the hugely popular gay anthem of Weimar Berlin. At the end of the Kabarett der Namenlosen, everyone is encouraged to sing along using those little pieces of paper, which have the refrain in the original German. It’s a powerful moment, even if most audience members don’t know the song and have no idea that they are participating in a remarkable homage to all the nameless artists lost in the untimely end of Weimar cabaret.

Written by Russian émigré Mischa Spoliansky and native Berliner Kurt Schwabach, Das Lila Lied was first recorded in 1921 by the Marek Weber Orchestra. Even though censorship was relaxed and there were several gay cabarets in Berlin, it was still illegal to be homosexual, not to mention socially taboo. Spoliansky wrote the song under a pseudonym and no one knows who sang the original recording. Most people think the uncredited singer was Leo Monesson, one of the most popular crooners of the Weimar era, who is credited on over 1,400 recordings for all the major labels of the era and starred in 11 films.

Spoliansky, Schwabach, and Monesson were all Jewish. One by one, they fled Berlin as the Nazis rose to power. Spoliansky emigrated to London where he eventually became a film composer and never returned to Berlin. Schwabach had a more difficult time and hopped from London to Prague to Palestine during the war years. Although he found relative success after returning to Germany in 1949, he never recovered from the persecution he suffered and committed suicide in 1966.

Monesson also never recovered from the Nazi era. He went from Paris to Spain to New York, where he settled in the town of Ardsley and became a postage stamp dealer. In 1952, he applied for compensation to the Berlin State Office, asserting, “I managed, after 1933, never again to earn money by singing. My playing has been developed by German culture and elsewhere is strange and unpopular.” 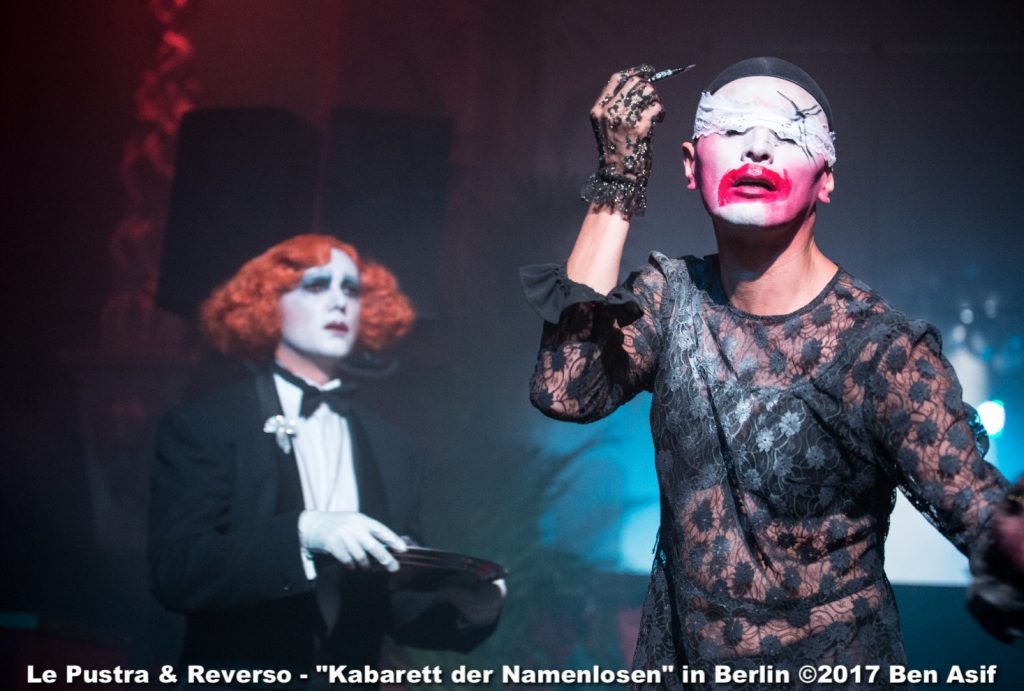 It’s the tragedy of these artists that gives the Kabarett der Namenlosen its profound depth of poignancy. At the end of the show, when Le Pustra has the entire audience singing Das Lila Lied, it feels like a bridge is finally being created between the underground cabarets of the Weimar era and Berlin today. After all this time, Berlin is finally able to pick up the threads from the 1920s that were so untimely cut short. The ghosts have been summoned, a ceremony has been performed, and at last, Berlin is free to embrace a part of its past.

CHORUS:
We’re not afraid to be queer and different.
If that means Hell, well, Hell! We’ll take the chance.
They’re all so straight, uptight, upright and rigid.
They march in lock-step, we prefer to dance.
We see a world of romance and of pleasure.
All they can see is sheer banality.
Lavender nights are our greatest treasure,
where we can be just who we want to be.

Round us all up, send us away,
that’s what you’d really like to do.
But we’re too strong, proud, unafraid.
In fact, we almost pity you.
You act from fear. Why should that be?
What is it that you are frightened of;
the way that we dress,
the way that we meet,
the fact that you cannot destroy our love?
We’re going to win our rights
to lavender days and nights.

Vaudevisuals interview with "The Umbilical Brothers".