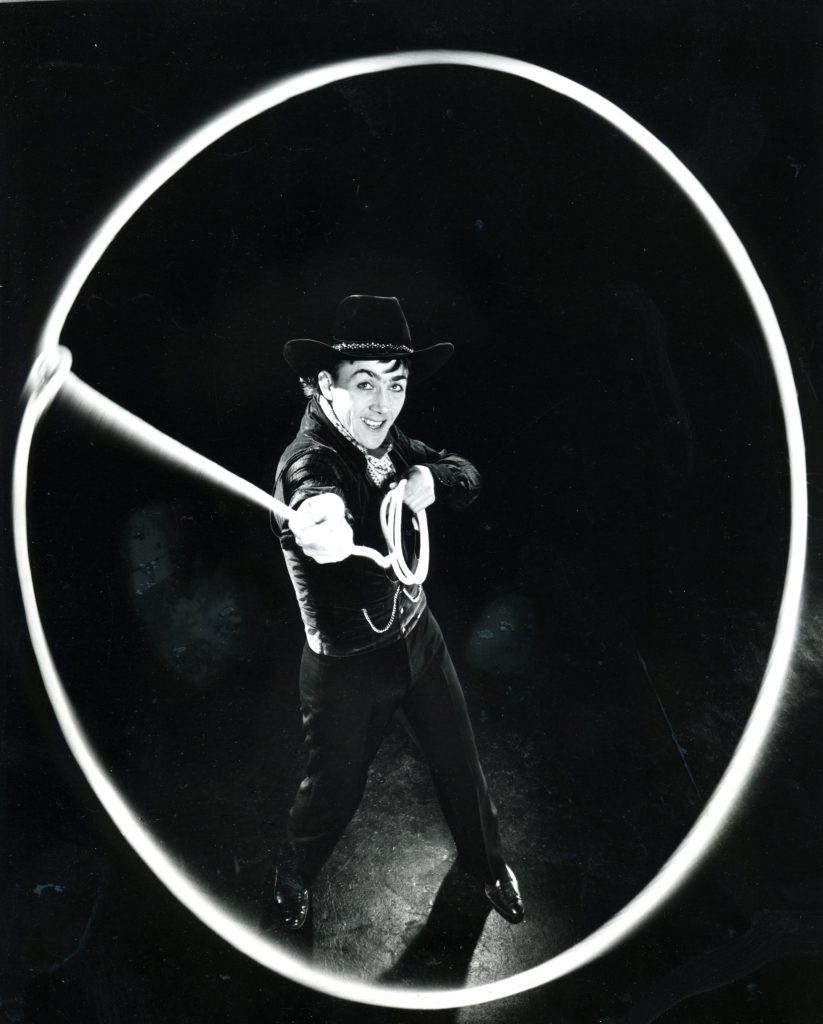 At eight years old Vince Bruce met early Wild West cowboy star and music hall performer, Tex McLeod who lived down the street from him in England. Inspired then to be a rope twirling cowboy like his hero, Vince practiced rope tricks under the tutelage of his inventor father. By the age of twelve, he had a regular Friday night spot at a local holiday resort.

As a teenager in the traveling circuses of Europe and later in cabaret clubs and theatre festivals around the world, Vince developed his natural style as an entertainer with unparalleled ability as a western arts virtuoso.

Vince first came to the States in 1983 as the half-time act for the Harlem Globetrotters and that same year won every award at the first convention of the International Trick & Fancy Ropers Association.

In 1991 he starred in the Broadway hit “The Will Rogers’ Follies” where he created the role of “The Roper,” portraying Will Rogers on the silver screen of Hollywood. The show ran two and a half years and received seven Tony’s.

While in New York, Vince met his wife Annie Dubats, a singer prominent in Manhattan’s downtown art and music scene. When working together, Annie graces Vince’s act by singing a few of her own songs and some country classics while on horseback.

Vince’s show is unique. I mean, how many British Cowboys do you know? He looks like the quintessential cowboy — tall and slim with a lined, character face. He’s a blast of energy when he comes on stage swinging a lasso in a big circle that spins wildly over the heads of a surprised audience, while the little bits of “business” that he puts into his roping routines make whatever he’s doing irresistibly entertaining. 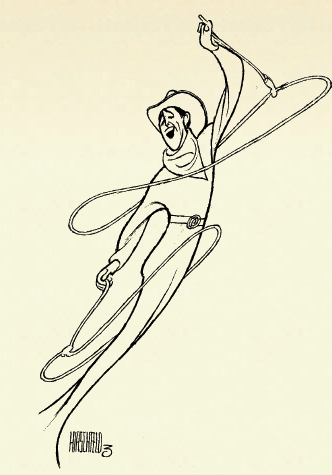 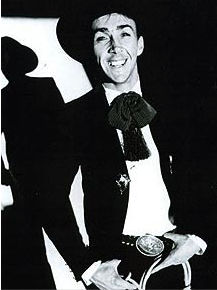 Here is a lovely obit from the UK paper The Telegraph

A Tribute by A.J. Silver

There are very few people in history who have earned the title “ The Greatest”.
Vince Bruce the greatest western performer to ever live is one of them.
Vince is also known as the Wizard of Whips and Ropes performed in the most prestigious entertainment venues around the world including Broadway,  Carnegie Hall and a regular performer at The Tiger Palast in Frankfurt, Germany.
His western act including trick roping and whips but what set him apart was his unmatched skill level and artistry.
He was a true artist!
Most roping acts were based on technical skills.
Rope spinners would perform their tricks with music playing in the background and often it was somewhat boring.
Vince took the western act and showed the world how exciting it could be combining his skills with comedy and showmanship.
His act was perfectly timed to the music and the audiences knew they were watching a virtuoso.
Vince also included unicycle skills and performed the famous Bobby May trick in his act.
The Bobby May trick involved throwing a lit match behind his back and catching it in his mouth followed by throwing a cigarette behind his back and catching it in his mouth and lighting it with the match, he would then cut the lit cigarette out of his mouth with his whip. This trick earned the respect from jugglers and circus legends and  It made him more than a western act, he was a variety superstar.
Vince’s act had such a high skill level that unless you understood roping you could never fathom that he was performing so many risky feats that a mistake could happen any second. To perform an act at this level requires exceptional confidence and focus and countess hours of daily practice.
When talking to variety artists who do not understand roping I call Vince the Francis Brunn of ropers.
Just like there will never be a juggler who can be compared to Francis,  there will never be another roper who can be compared to Vince.
They are both legends who took their art form to another level with original technical skill and artistry.
They truly are kings of their disciplines and have inspired countless performers.
I imagine every western performer alive today considers Vince Bruce their idol.
Vince traveled the world performing in the most prestigious stage productions and circuses and then he created a unique rodeo act with his performing partner and wife Annie Dubats.
Annie met Vince while he was starring in the Big Apple Circus in NYC.
Annie had a career as a singer and grew up working with horses.
They complimented each other and Annie made it possible for Vince to create the act he always dreamed of, spinning a big loop around two horses while standing on them and racing around the arena at a full gallop.
Annie and Vince also created an original horse catching/roping act that had all but disappeared from the rodeo.
Annie would sing on horseback, not an easy feat while Vince would perform Mexican style roping while seated and standing on his horse. Annie would then gallop past Vince’s horse and the timing had to be perfect as Vince would roll his loop out and catch Annie and her horse.
This act would not have been possible without Annie. There is so much preparation that goes into training and maintaining an act like this.
In the past, Vince could hop on a plane with his luggage but now there were two horses that had to be transported and cared for.
Annie made it possible for Vince to maintain his skill level by sharing the responsibility of exercising, training and caring for their two horses Cochise and Comanche.
Annie and Vince made a perfect team and to see them perform together with their horses was witnessing a lifelong dream come true.

We lost Vince to cancer in 2011.
He had a great sense of humor and a big heart.
Vince had a huge amount of love for the world and he was generous with it.
He always gave encouragement to fellow ropers and would always offer help. It was hard not to love him back.
I started my career as a rodeo trick rider and always thought trick roping was boring until the day I saw Vince perform.
My mind was blown! I couldn’t believe what I just saw. I was actually angry that I could not imagine how beautiful and exciting a western act could be.
I owe a great deal to Vince. It was because of him that I decided to create a roping act.
I always enjoy my talks with Annie who I consider almost like a sister.
Annie is one of the few people I know who understands the whole gamut of Show Business – Broadway, Circus, Stage productions, Rodeo, Wild West Shows. Horse Spectacles ………
Annie saw the world with Vince and has such a vast knowledge of not only Show business but what went into creating and maintaining Vince’s act.
There are very few days that go by that I don’t wonder how Vince was able to accomplish the high skill level and artistry of his act and  It truly boggles my mind.
He was Superhuman, peerless and he will always be unmatched – The Greatest.