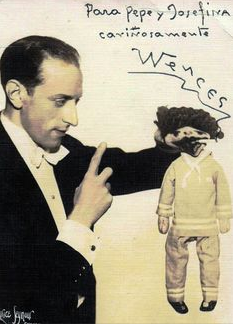 Senor Wences in 1935 with an early version of Johnny. 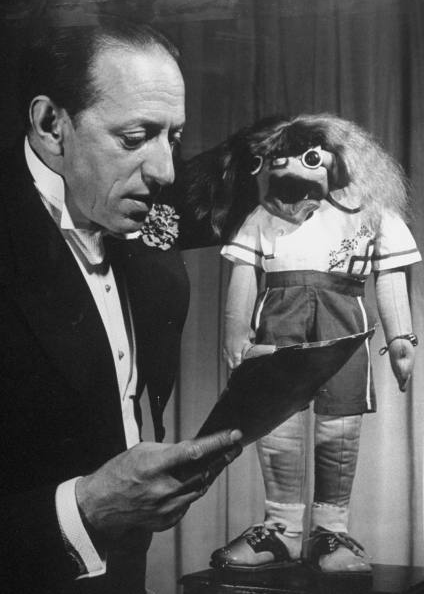 Wenceslao Moreno, who started his career as an unsuccessful bullfighter in Spain and then became Senor Wences, a gifted ventriloquist who was able to transform his thumb and forefinger into a convincing dummy that endeared itself to millions of American television viewers in the 1950’s and 60’s, died yesterday, his 103d birthday, at his home in Manhattan.

He and his wife, Natalie, had lived on Manhattan’s West Side for more than 60 years. They also lived in Salamanca, Spain, Senor Wences‘s hometown.

In a career that lasted more than eight decades, Senor Wences repeatedly proved himself a stellar part of the tradition that included Edgar Bergen, Paul Winchell and other popular ventriloquists who delighted audiences from the 1920’s well into the television age.

What set Senor Wences apart from everyone else was that his main character was not carved out of wood, as were Bergen’s Charlie McCarthy and Mr. Winchell’s Jerry Mahoney. Johnny, Senor Wences’s dummy, was naturally formed by one hand. He painted lips on his thumb, draped a ridiculous orange wig across his fist, stuck eyes on the side of his hand, just below the wig, and let the hint of a body dangle below. As soon as he began his act, this unlikely creation came to life as Johnny, a lovable, impertinent little boy, not unlike the boy Senor Wences had been.

It was shortly after the turn of the century in Spain that Wenceslao Moreno found that he could imitate others and throw his voice. In school, when one of his classmates was absent, he would answer for him, and the teacher would mark the missing student present. In those days, he had a friend named Paulo, who lived next door. The friend’s mother would appear at an upstairs window and call for her boy to come home.

”No, Mama,” a voice sounding like Paulo would say. ”I refuse to come into the house.” When the mother demanded that her son obey, the voice would continue in defiance: ”Mama, you attend to your own business, and I will attend to mine.”

Poor Paulo got the dickens on several occasions until it was discovered that he had not been the culprit. It was Wenceslao Moreno.

Other times he successfully imitated the voice of the mailman, telling the tenants of his apartment house that the mail was there and ready for distribution. (There were no mailboxes.) All of the tenants would dutifully come down the stairs and assemble at the front door, only to find that no mailman was there. In one instance, an angry resident dumped a pail of water on the real mailman’s head to teach him not to trifle with the residents of that building.

The little sprite of a voice and impish personality emerged to a widespread audience decades later, in the United States in 1948, when Senor Wences made his television debut and introduced Johnny to virtually the nation’s entire television audience, which assembled on Tuesday nights to watch Milton Berle‘s variety hour.

Shortly thereafter he made the first of 48 appearances on Ed Sullivan’s show. Neither Mr. Sullivan nor his audience ever tired of Senor Wences.

Senor Wences’s Johnny was not a rake or a wise guy, like Charlie McCarthy. He was a disembodied insurrectionist whose single-minded purpose was to nettle Senor Wences in little ways, as small boys are wont to do. And so, if Senor Wences announced to his audience that a certain trick was going to be ”very difficult,” Johnny’s little voice would insist that it was ”easy.” If Senor Wences gave Johnny a dirty look, Johnny would add, ”Difficult for you, easy for me.”

In the conversations that ensued, Johnny would seem to be a completely separate being from Senor Wences, quite capable of saying anything. There were no jokes, per se. Just snippets of silly but strangely eloquent conversation. And the exchanges were always polite, gentle; segments ended with kisses between Johnny and Senor Wences.

Johnny was not the only star Senor Wences developed. The other was Pedro, a talking head in a covered box. Pedro was grouchy, imperious, raspy. He almost did not become part of the act. Originally, Pedro had a body that was crushed in a train wreck near Chicago. Senor Wences, salvaging the head, put it in a box. At first, those who booked the act resisted; they did not think people would relate to a head in a box. Senor Wences prevailed, and Pedro proved almost as big a hit as Johnny.

When Pedro and Johnny were simultaneously in action, it seemed a wonder that Senor Wences could get through his shows in full control. He had a palpable Spanish accent, and there were times when some found it difficult to understand him. The laughs came just the same; his timing and the gentleness of his message were such that he transcended the bounds of language.

Senor Wences, who was also a formidable juggler, started out as a young torero in local bull rings near Salamanca. After several bulls had got the best of him, he turned to ventriloquism and juggling. By the 1920’s his renown in both fields was such that he was in demand in Europe and Latin America. He first came to New York in 1935, performing at the Club Chico in Greenwich Village.

But it was not until he appeared on television that he became truly famous. In addition to his appearances on the Berle and Sullivan shows, Senor Wences also appeared with Jack Paar, Steve Allen, Perry Como and Jack Benny. He was seen in a specialty act in the 1947 movie ”Mother Wore Tights,” starring Betty Grable and Dan Dailey. In 1963, he toured with Danny Kaye’s International Revue.

In 1996, Senor Wences received the Lifetime Achievement Award from the National Comedy Hall of Fame for his devotion ”to entertaining generations of audiences and bringing countless hours of joy and happiness to millions throughout the world.” He was also honored by New York City, which erected a blue street sign alongside the Ed Sullivan Theater designating a block of West 54th Street from Eighth Avenue to Broadway as Senor Wences Way.

He remained vigorous well past his prime and was still working in 1986 when he toured with Mickey Rooney and Ann Miller in ”Sugar Babies.” His wife, who is his only survivor, said he got that job because she was able to convince the producers that he was a mere 75 years old, 15 years younger than he was. 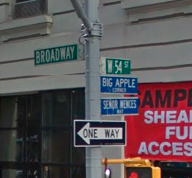 In the 1950’s Wences did several attempts to make TV commercials. A few for Parkay Margarine and a few for Prince Spaghetti.

Here are videos from those days.

ED SULLIVAN SHOW – Senor Wences Bio and show appearance Information. Go Here
Having photographed many performers over the last 30+ years I can truly say that ‘Senor Wences’ was one of my all time favorite acts!
I was fortunate to have seen Senor Wences and Francis Brunn share a bill at NY’s “Chateau Madrid” club. It was a delight!

The Regard of Flight - Bill Irwin, Doug Skinner and Michael O'Connor