“THIS WAS THE END”

created and directed by Mallory Catlett 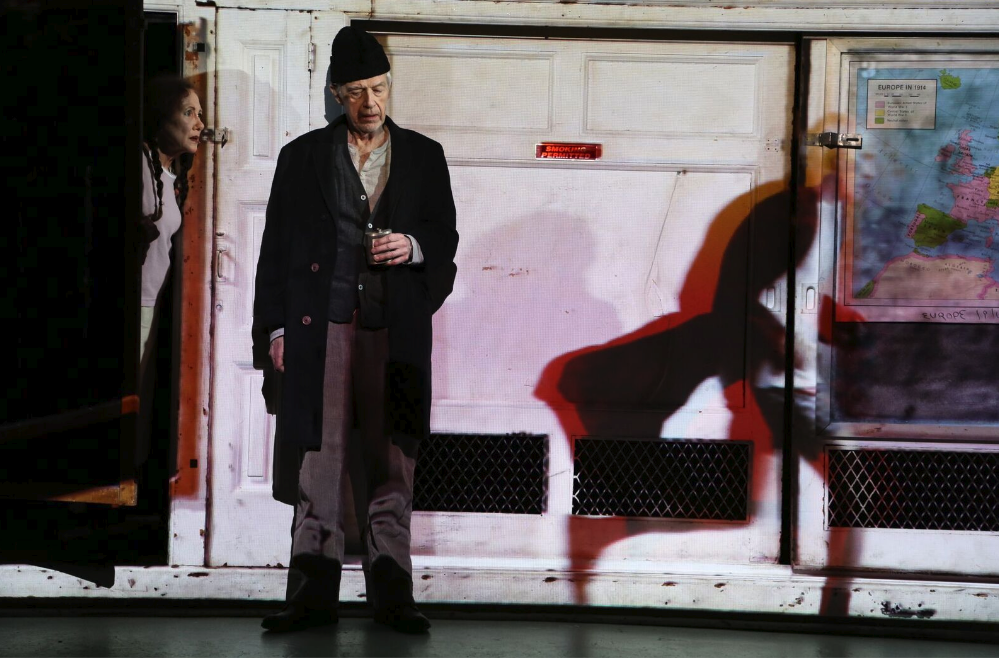 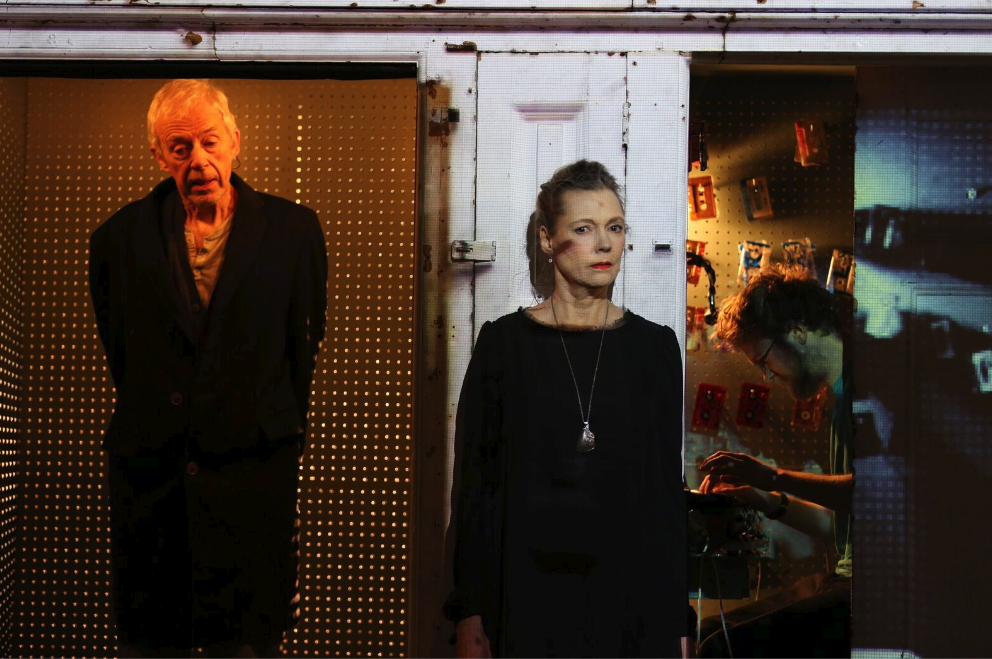 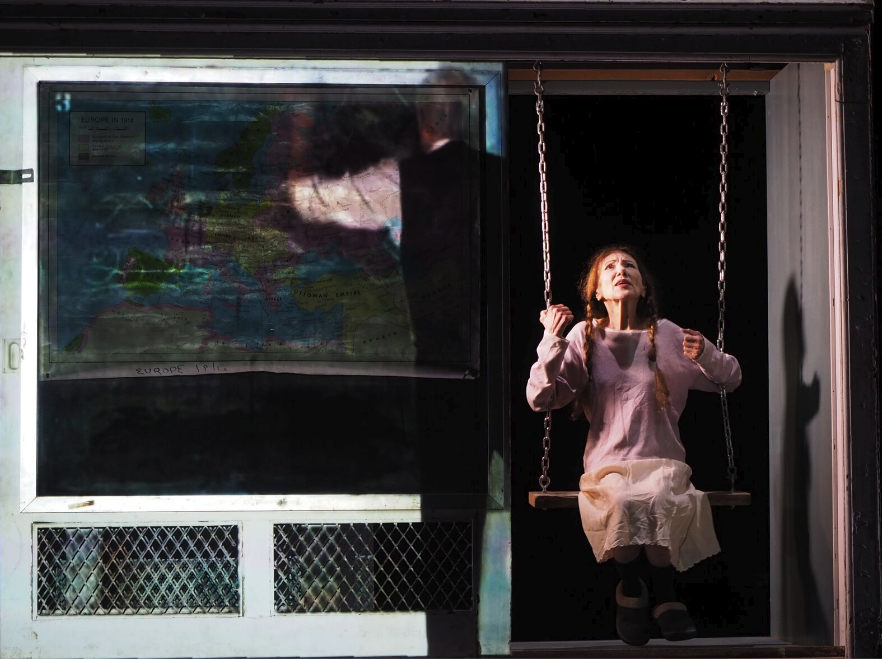 Video Excerpt from “This Was The End”

Mallory Catlett’s This Was The End is a multiple award-winning, multimedia reconstruction of Anton Chekhov’s Uncle Vanya that features four luminaries of avant-garde theater: Black-Eyed Susan as Sonya, Paul Zimet as Vanya, James Himelsbach as Astrov, and Rae C. Wright as Yelena.

Since 2004, director Mallory Catlett has worked across disciplines to expand the boundaries of theater. Through original works with her own company, Restless NYC, and collaborations with some of today’s leading artists — composer Mika Karlsson (The Echo Drift), Dread Scott(Decision), Aaron Landsman(City Council Meeting&Perfect City)—Catlett creates theater that The New York Times calls “lurid, feverish and powerful.” She has been called a “downtown treasure” byTime Out New York.
As part of their inaugural season in the newly renovated 122 Community Center, Mabou Mines is proud to co-produce a remount of Catlett’s This Was The End , a multiple award-winning, multimedia reconstruction of Anton Chekhov’s Uncle Vanya. In the play, Vanya asks, “What if I live to be 60?” In This Was The End, Catlett, along with four luminaries of avant-garde theater, answers that question to great and moving effect.
The cast includes Black-Eyed Susan(Ridiculous, John Jesurun, Obie for Sustained Excellence) as Sonya, Paul Zimet(Open Theater & Talking Band) as Vanya, James Himelsbach (Obie for The Foundry’s Talk) as Astrov, and Rae C. Wright (Obie for Sustained Excellence with The New York Street Theatre Caravan) as Yelena.
The Was The End is a visceral exploration of memory and aging, expressed in multiple ways. In addition to featuring actors over sixty, this encore engagement marks a return of This Was The End to the building, now transformed, where it was originally developed from 2009–2011 during the Resident Artists Program of Mabou Mines. The set, a long classroom wall complete with sliding chalkboards, is also the actual 7 x 14-foot wall from the original Mabou Mines studio in the historic schoolhouse. This relic was salvaged by Catlett and set designerPeter Ksanderbefore 122CC closed in 2013 for renovations.
The sound and video design of This Was The End features a score of voice and image that converge with the live performers. Keith Skretch’s video, which projects the wall onto itself, creates a temporal blur from which the past emerges and recedes. The sound design includes fragments of Chekhov’s text mixed live onstage by analog tape DJ and sound artist G Lucas Crane, who also manipulates the video as he plays, in a game that allows the performers to improvise with past versions of themselves.  “The result is a work of unparalleled technical integration,” said Helen Shaw inTime Out New York. “The whole thing functions as a musical sculpture, a wayback machine dedicated to the material quality of memory, the way it codes itself into grooves and fissures.”
Following its premiere in 2014 at The Chocolate Factory, This Was The End received a Special Citation Obie Award, a Bessie award for best visual design and a Henry Hewes award for its interactive sound and video design. This Was The End was developed under the mentorship of the late Ruth Maleczech.
Since then, Catlett has continued to develop and re-imagine This Was The Endas an interactive sound and video installation that premiered March 20 at EMPAC in Troy, NY. This standalone installation is a work of portraiture that explores the ideas of memory and aging as a performative and architectural archive. Like the performance, the installation features the architectural façade of the original Mabou Mines studio in the 122CC building. The installation will be on view at the Mabou Mines Theater June 11-15, hours to be announced.
Rounding out the creative team for This Was The EndareOliver Gajic(costumes), Chris Kuhl(lighting), Ryan Holsopple(programming), Johanna Meyer(choreography), Bill Kennedy(technical director) andKelly Allen(Production Stage Manager).
Performances of This Was The End will take place June 7–16 at the Mabou Mines Theater (122CC, 150 First Avenue, Manhattan). Critics are welcome as of Thursday, June 7 for an official opening on Sunday, June 10 at 3 pm. Tickets, priced at $25, be purchased at maboumines.org or by calling 866-811-4111.
# # # # #

Vaudevisuals Bookshelf - "The Girls in the Picture" by Melanie Benjamin