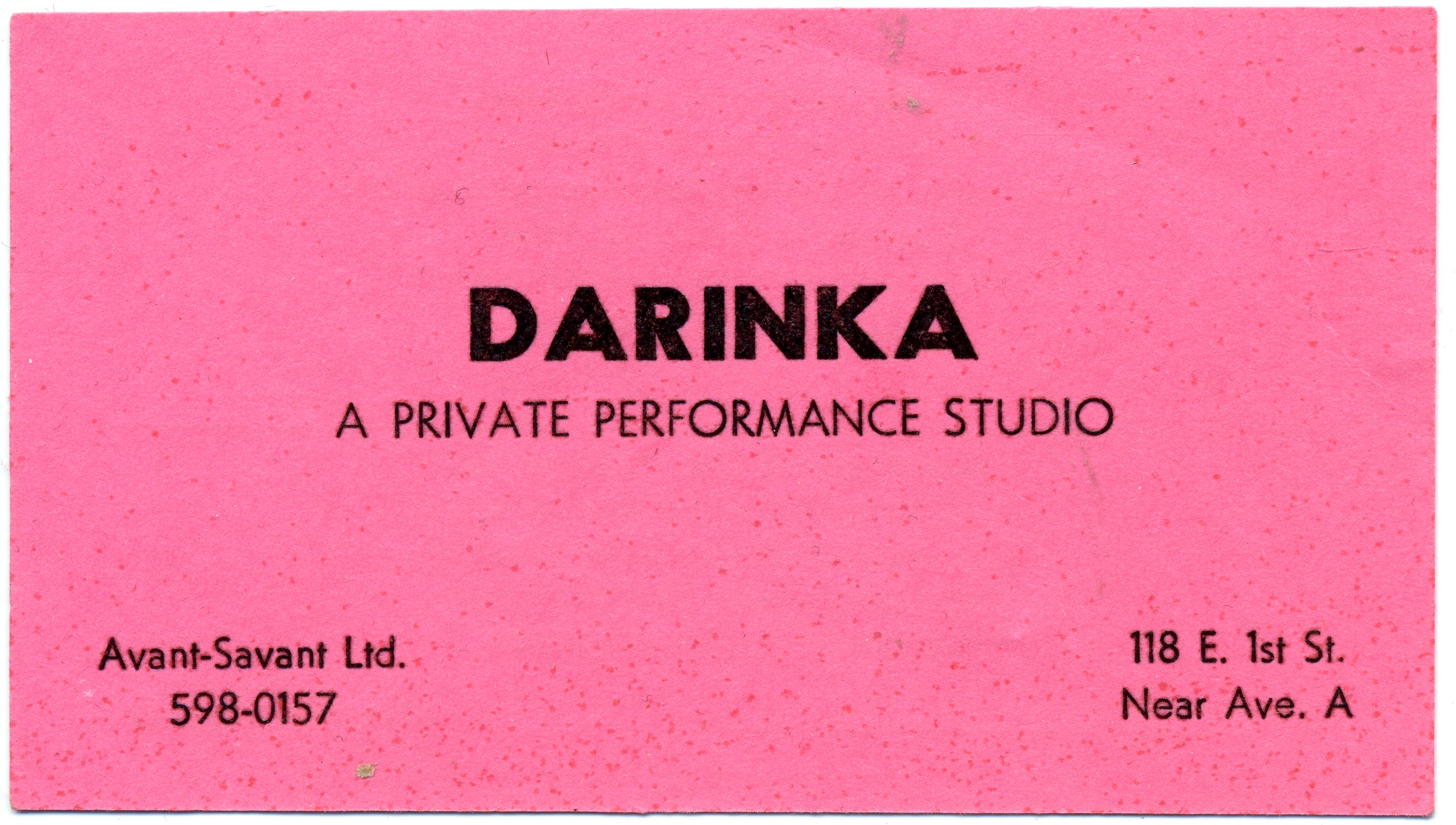 Since it has been 5 years since I conducted this interview with Gary I thought it needed to be reposted as many New Yorkers are not familiar with the club and theater ‘scene’ that was so happening when DARINKA was alive! 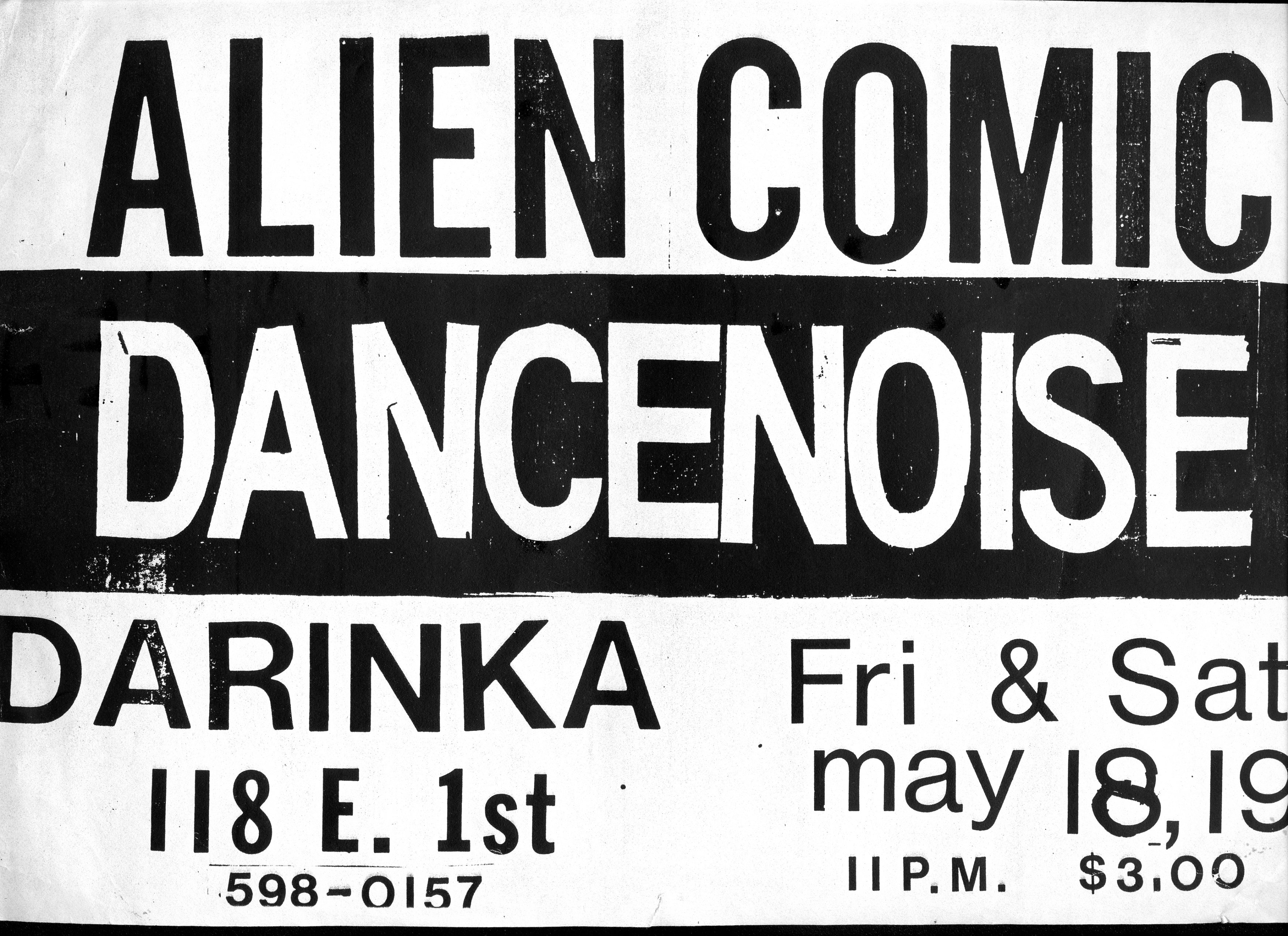 Alien Comic and DanceNoise at Darinka Flyer from 1985. 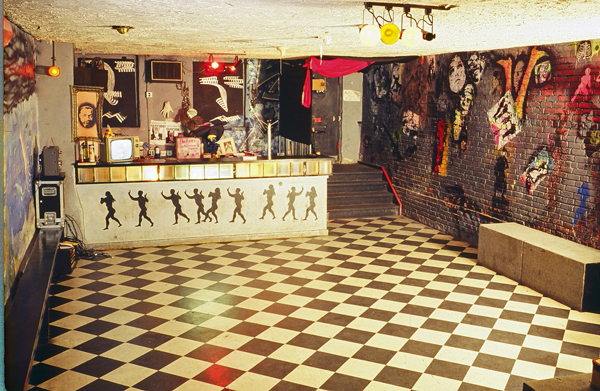 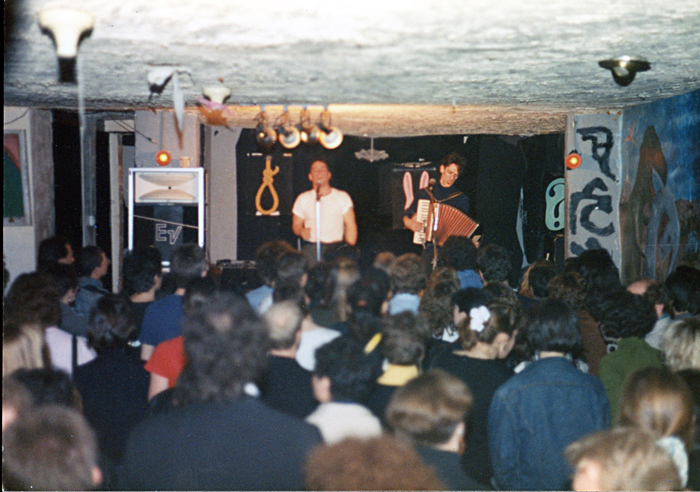 The archives from Darinka were donated to The Fales Library & Special Collections at NYU. Here is a Biographical/Historical note from the archives.

Darinka: A Performance Studio was opened on April 21, 1984, by Gary Ray Bugarcic (aka Gary Ray). The club served as a venue for artists of all disciplines, including performance, theatre, music, dance, film, video, fine art, and poetry and prose. In keeping with the Eastern European roots of the East Village/Lower East Side, the club was named after Gary’s mother, who was Croatian-born. Darinka is a derivative of the Slavic word dar, meaning “gift.”

The club was located at 118 East First Street, two doors down from Avenue A, and had a speakeasy type entrance under the residential stoop of the building. Up to the late 1970s, the space was used as a local Italian Social Club until a fire destroyed it. During the renovation of the space, all the old charred beams were laid in the backyard to provide an urban rustic wood patio enjoyed by patrons during the hot summer months. The interior of the club had a small proscenium stage that was described by many as looking like a live television. A variety of local painters such as James Romberger and Mark Kostabi showed their work on the walls of the club until the permanent murals and stencils were painted. Regular performers included They Might Be Giants (considered the house band), performance artist Steve Buscemi (still a fireman when he started performing), Karen Finley, Jack Smith, Charles Long, William Pope L., Kembra Pfahler, Nick Zedd, Anna Deavere Smith, and John S. Hall. In addition, there were many writers who read during the Sunday prose and poetry nights, including Darius James, Patrick McGrath, Hal Sirowitz, Lynne Tillman, Mark Dery, Nina Zivancevic, Peter Cherches, Bob Holman, Ira Cohen and Taylor Meade.

On June 29, 1985, the NYPD raided the club during a mushroom party and performance by artists David West and Andy Somma. Gary Ray and the bartender, Robin Clements, were arrested for operating an unlicensed bottle club. Several months later Darinka reopened as a private club with Randy Lee Hartwig and John Gernand as managers. As a private club, each new member would fill out a membership application card upon entrance. The application cards were kept in a file near the door in case of a police inquiry. Membership cards were also distributed.

Darinka was the first home of “The Church of the Little Green Man.” The church was founded by conceptual artist Mike Osterhout and had its first service in December of 1986. Darinka closed in May of 1987.

Articles mentioning Darinka have appeared in The Village Voice,  New York magazine,  Performance,  East Village Eye,  Toronto Globe and Mail,  The New York Times, and  The Drama Review (Spring 1985). The club is also acknowledged in the documentary  Gigantic: A Tale Of Two Johns.

Gary Ray Bugarcic, a graduate of The American Academy of Dramatic Arts, has worked as an actor and stage director in almost every downtown New York theatrical venue. As a musician, he played in several bands, including State of Desire and The Academy, which performed regularly at CBGB and Danceteria before opening Darinka. After closing the club he toured with Karen Finley in her play  The Theory of Total Blame and worked with The Ridge Theatre Company as well as with Kestutis Nakas and in Jeff Weiss’s “Hot Keys.” He has also appeared in such indie films as Todd Haynes’  Poison and  Desperately Seeking Susan.  New Blood magazine published his poetry in the 1980s and his “3-D Lenticular Photographs of the Eighties” have been shown in several New York City galleries, including the Participant Gallery.

Here is a calendar list that Gary provided me to give an idea of the lineup that appeared every week at Darinka in 1985.

1/4, Ted Sputnik & his Orchestra plus the music of Kid Ego (Gary Quasar), plus performance with Mike Smith.

1/18, They Might Be Giants, plus the music of Bond Bergland.

1/19,  Films by Mark Kehoe including; “Revenge of the Amazons,” “Metal Madam,” and “The Naked Hiptress.” Plus performance w/ Michael Smith and the music of Burnt Orange.

2/9,  “A Hollow Venus (the Diary of a GoGo Dancer),” performance w/ Heather Woodbury. 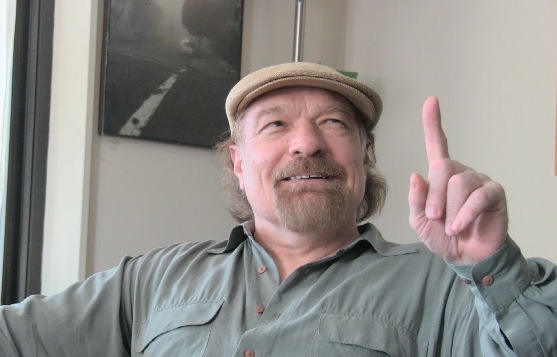 Thanks to Gary Ray for this interview!