For More information about this Laboratory.

Carlos is an international stage director, actor and theatre researcher. For 20 years he has been traveling the world to develop and explore new theatrical languages, influenced by the study of human movement and its society.

He works in partnership with Paige Allerton, content creator, dramaturge and Editor of Carlos’s Research. And he is supported by an artistic team composed by Paulo Serantes,Pascale Lecoq, David McDonald and Ammar Keshodia.

Carlos was born in Madrid in 1976. He belongs to the generation of Spanish Transition after Franco’s dictatorial regime. He comes from a family of migrants originally from Granada (south of Spain). His father José is a self-taught prestigious Chef, and his mother Angeles is a craftswoman.

At the age of 20 years old he left Spain to join Jacques Lecoq’ School in Paris. He studied with Jacques Lecoq for three years. Nowadays he is an associate artist at the Laboratoire d´Etude de Mouvement (L.E.M.) at the School of Jacques Lecoq.

During his time with Lecoq, Carlos encountered Donato Sartori in Italy.  Then in 2003, he became Donato Sartori´s pedagogical assistant and collaborator. By the hand of Sartori he began to explore the architecture of gestures and the anthropology of the mask.

After the school he went back to Madrid for a year to create his theatre company (Teatro Punto 1998-2011). There he became specialized in the dramaturgy and acting technique of Contemporary Commedia dell´Arte. At the same time, he joined Teatro de La Abadia as pedagogical coordinator, under the direction of José Luis Gómez.

After a Teatro Punto’s tour in Ireland, Carlos decided to establish his research in Galway for 3 years. These years would be a fundamental period for Carlos’ work where he developed his research together with artists and theatre activists Miquel Barceló and Judith Higgins.

His Laboratory leads him to the development of new theatrical languages where the body and the space are the base of storytelling and emotional communication.

His work and own productions are strongly connected to popular tradition, dramaturgy of comedy and sociology. 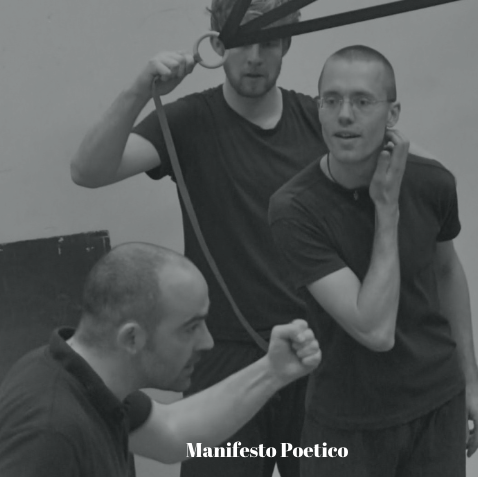 For more information about Carlos Garcia Estevez and his Manifesto Poetico go here.