Cardone came over yesterday to tell me about the upcoming Tribute he is planning and producing with Slipper Room’s James Habacker.

A Tribute to our friend Johnny Fox 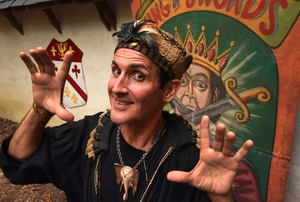 ~ A Celebration of the Life of Johnny Fox ~

Click here for more information on this great event!

This podcast is called Stories from the Pitch for a reason, and this particular interview exemplifies this title more than most because Johnny Fox is a natural when it comes to telling stories. His life and his career have been filled with so many chapters, in fact, the stories came fast and furious.
The striking thing about Johnny’s stories is that they mix his experience with those from his mentors in a way that weaves a greater picture of how this Storyteller, Magician, Sword Swallower evolved into a well-established entertainer who’s been on the circuit since the 70’s.
Guy Collins sat down with Johnny in his 1957 GMC vintage bus at the 2015 Maryland Renaissance Festival to discuss how he got started, who he was taught by and to touch on the sometimes uncomfortable topic of material that’s been appropriated from him over the years. The names, places, and events all helping to capture a slice of history from the Busking World.
For more of these great stories go here!  Busker Hall of Fame
~ ~ ~
More Johnny Fox

In June 1999, Fox opened the Freakatorium, El Museo Loco, a museum of sideshow curiosities, on the Lower East Side of Manhattan. In the face of low numbers of visitors and rising rent, the museum was closed in January 2005. Fox was partly inspired to open the museum by his childhood visits to Hubert’s Museum and Flea Circus in Times Square. His collection of oddities includes narwhal tusks, an elephant’s-foot liquor chest, a two-headed turtle, a vest owned by General Tom Thumb, and the glass eye of Sammy Davis, Jr.

Hope to see you all at The Slipper Room on Thursday to Celebrate Johnny Fox!