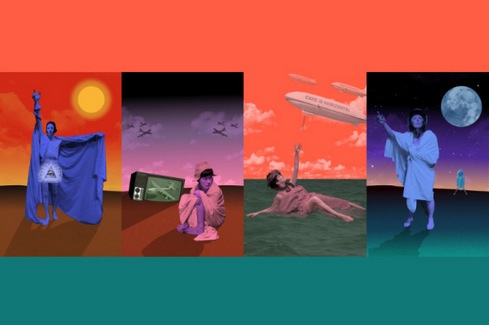 T.B. Sheets – About The Show

Set in a tuberculosis sanatorium on a remote mountainside (not unlike Magic Mountain), a community of terminally ill Ones transcend to an order of living saints and build a spaceship to escape their physical ailments. This dizzying and iconoclastic new work celebrates the power and beauty of the fragile body and the multiplicity and fluidity of identity.

Buran Theatre is an NYC-based ensemble of disparate multidisciplinary and intergenerational artists who joyfully and anarchically reconfigure narrative, form, genre, gender, and design to develop and present new performance works. Past productions include The House of Fitzcarraldo, Meile be Akcento, Nightmares: a demonstration of the sublime, Magic Bullets, and Mammoth, among others.

Performance space for this production was subsidized by the A.R.T./New York Theatres Rental Subsidy Fund, a program of the Alliance of Resident Theatres/New York (A.R.T./New York).

Vaudevisuals Bookshelf - "The Magician and the Cinema"