A Memoir by Ottavio Canestrelli with Ottavio Gesmundo 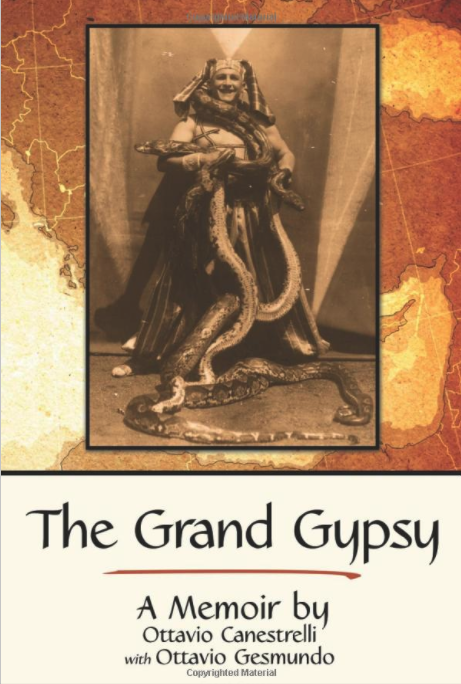 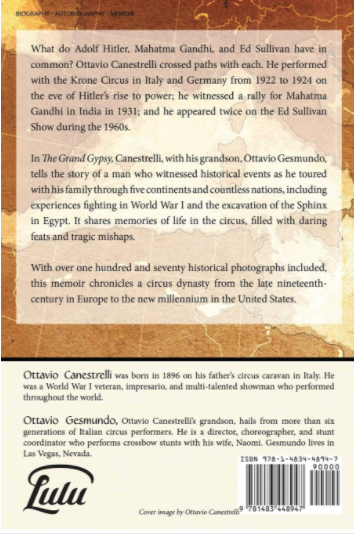 The Grand Gypsy is a memoir of life in the circus, filled with daring feats and tragic mishaps. It is the true story of a man who experienced historical events as he toured with his family through five continents and countless nations. Among these events are his harrowing experience fighting in World War I against the German Army in Italy, and the excavation of the Sphinx in Egypt.

Replete with over 150 rare, historic photographs, The Grand Gypsy is a chronicle of a circus dynasty from the late nineteenth century in Europe to the new millennium in the United States of America. Included are significant images that document an extensive tour through such exotic locations as Burma, Sumatra, New Guinea, Syria, and Mesopotamia during the early twentieth century, and numerous portraits and captured performances in New York, Chicago, Los Angeles, Hollywood, Las Vegas, and Sarasota, Florida.

“The Grand Gypsy is indeed fascinating and highly enjoyable reading, not only for anyone interested in circus history but also for any curious or adventurous mind.”

“The story of Ottavio Canestrelli is unique and this book, rich with history and filled with humor, is fresh and memorable.” – “readers will definitely be interested in his remarkable story.”

The Booklife Prize by Publisher’s Weekly

“The story of his travels, his acts and those of his talented family will enthrall any reader, and this is a most well-written and structured book”

“The roster of names dropped along the way, along with an expansive collection of photographs from every period covered in the book, should provide a good deal of pleasure”.

“​The pictures in the book are astonishing. With its pictures and rich anecdotes, this is a treasure of a book.”