“The Electric Woman” by Tessa Fontaine 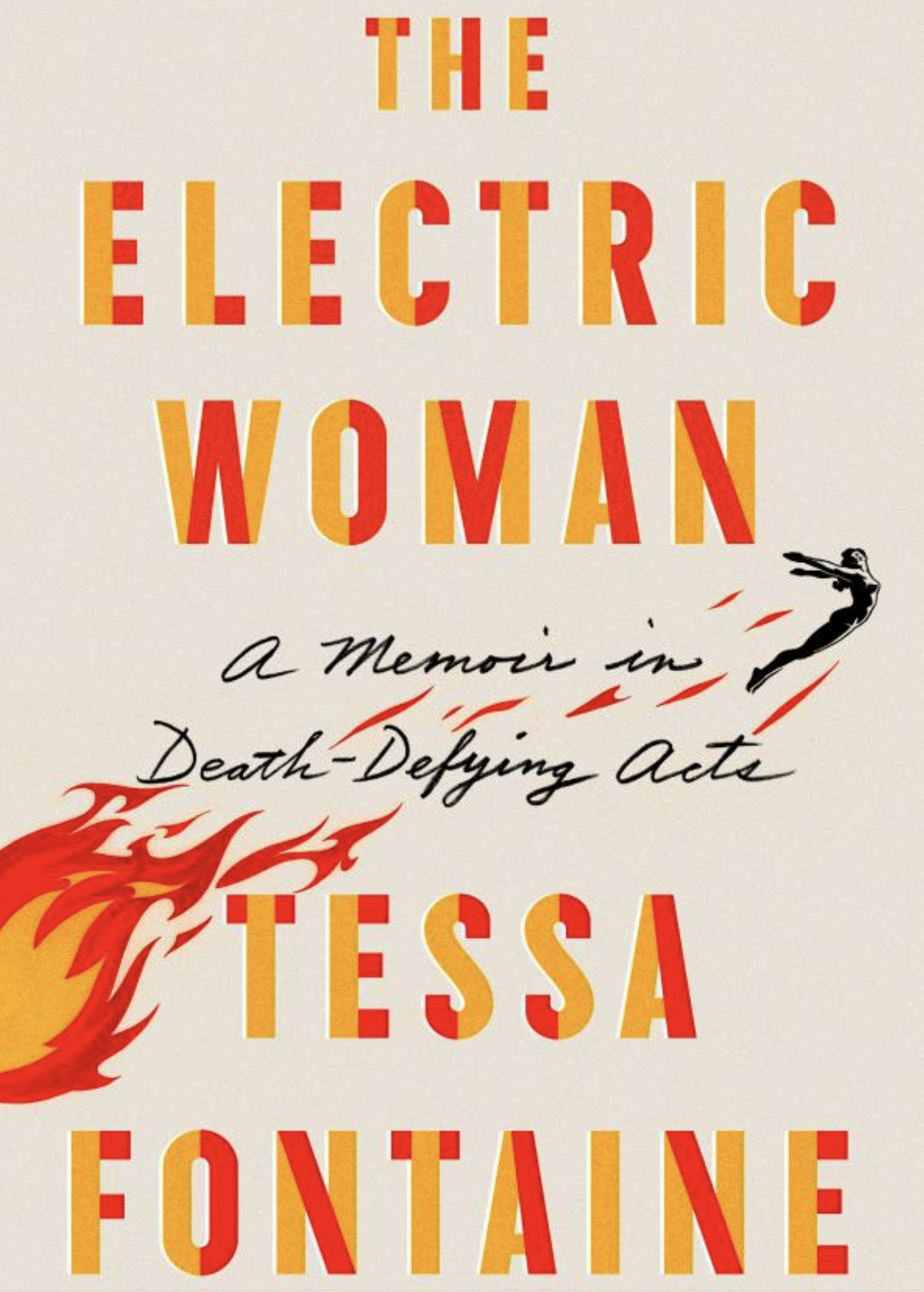 Tessa Fontaine’s astonishing memoir of pushing past fear, The Electric Woman, follows the author on a life-affirming journey of loss and self-discovery―through her time on the road with the last traveling American sideshow and her relationship with an adventurous, spirited mother.

Turns out, one lesson applies to living through illness, keeping the show on the road, letting go of the person you love most, and eating fire:

The trick is there is no trick.
You eat fire by eating fire.

Two journeys―a daughter’s and a mother’s―bear witness to this lesson in The Electric Woman.

For three years Tessa Fontaine lived in a constant state of emergency as her mother battled stroke after stroke. But hospitals, wheelchairs, and loss of language couldn’t hold back such a woman; she and her husband would see Italy together, come what may. Thus Fontaine became free to follow her own piper, a literal giant inviting her to “come play” in the World of Wonders, America’s last traveling sideshow. How could she resist?

Transformed into an escape artist, a snake charmer, and a high-voltage Electra, Fontaine witnessed the marvels of carnival life: intense camaraderie and heartbreak, the guilty thrill of hard-earned cash exchanged for a peek into the impossible, and, most marvelous of all, the stories carnival folks tell about themselves. Through these, Fontaine trained her body to ignore fear and learned how to keep her heart open in the face of loss.

A story for anyone who has ever imagined running away with the circus, wanted to be someone else, or wanted a loved one to live forever, The Electric Woman is ultimately about death-defying acts of all kinds, especially that ever constant: good old-fashioned unconditional love.

“An assured debut that doesn’t shy away from the task of holding the ordinary and otherworldly in its hand, at once. It’s herein that the book’s power lies . . . Throughout this narrative is the story of [Fontaine’s] relationship with her mother, a story that is sometimes its own hard-to-watch sideshow act. Fontaine is unafraid to write the ugliness ― the imperfect care and love ― that takes place between people, and the memoir is most ‘electric’ when it doesn’t shy from that imperfection . . . I’m stunned by the beauty of Fontaine’s rhythms and images.” ―Rachel Khong, The New York Times Book Review

“While caring for her mother following a stroke, Tessa Fontaine became enchanted by the world of the carnival sideshow, learning to charm snakes, swallow swords, and escape handcuffs. What Fontaine finds, as she recounts in her fascinating memoir, The Electric Woman (FSG), is that there’s no trick to overcoming one’s deepest fears.” ―Vogue

In the opening pages of this fascinating memoir, first-time author Fontaine learns how to eat fire. This is just one of several “death-defying” feats she learned during her stint with the World of Wonders, “the very last traveling sideshow of its kind.” Intrigued by illusion and danger, Fontaine—a grad student studying writing—accepted a surprising invitation to join the show. Not only did she yearn for adventure but she also hoped to temporarily escape from assisting her mother after her mother suffered a debilitating stroke. Fontaine segues between hospital visits to her mother in California’s Bay Area and the fantastical world of the carnival, where Fontaine learned to handle snakes, swallow swords, free herself from handcuffs, and eventually master the role of “the electric woman,” lighting light bulbs with her tongue. Traveling state and county fairs, Fontaine shares the unusual stories of her fellow carnival workers, all of whom come across as devoted to the exhausting, grueling, yet inspiring work they do each day. Fontaine explores the history of the carnival (e.g., the first incubators were on display in a carnival sideshow in the early 20th century); its pecking order of performers, carnies, and foodies; its humor and dark underbelly. This remarkable, beautifully written memoir explores the depth of mother-daughter love and the courageous acts of overcoming fear and accepting change.

Tessa Fontaine is the author of The Electric Woman: A Memoir in Death-Defying Acts, a Barnes & Noble Discover Great New Writers pick, an Amazon Editors’ Best of the Month featured debut, iBooks favorite, and more. Tessa spent the 2013 season performing with the last American traveling circus sideshow, the World of Wonders. Essays about the sideshow won the 2016 AWP Intro Award in Nonfiction, and have appeared in The Rumpus and elsewhere. Other work can be found in Glamour, LitHub, Creative Nonfiction, and more.

Around the country, she has performed her one-woman plays in theatres ranging from New York to San Francisco. The scar on her cheek from a 2 am whip act is slowly fading.

Tessa loves redwood trees, ghost stories, and goats. Every year on her birthday, as a gift to herself, she eats unlimited Doritos.

To purchase you can go here!

This book and others that have appeared in the Vaudevisuals Bookshelf appear here. By purchasing it here you are helping fund this blog!