The Day The Laughter Stopped by David Yallop 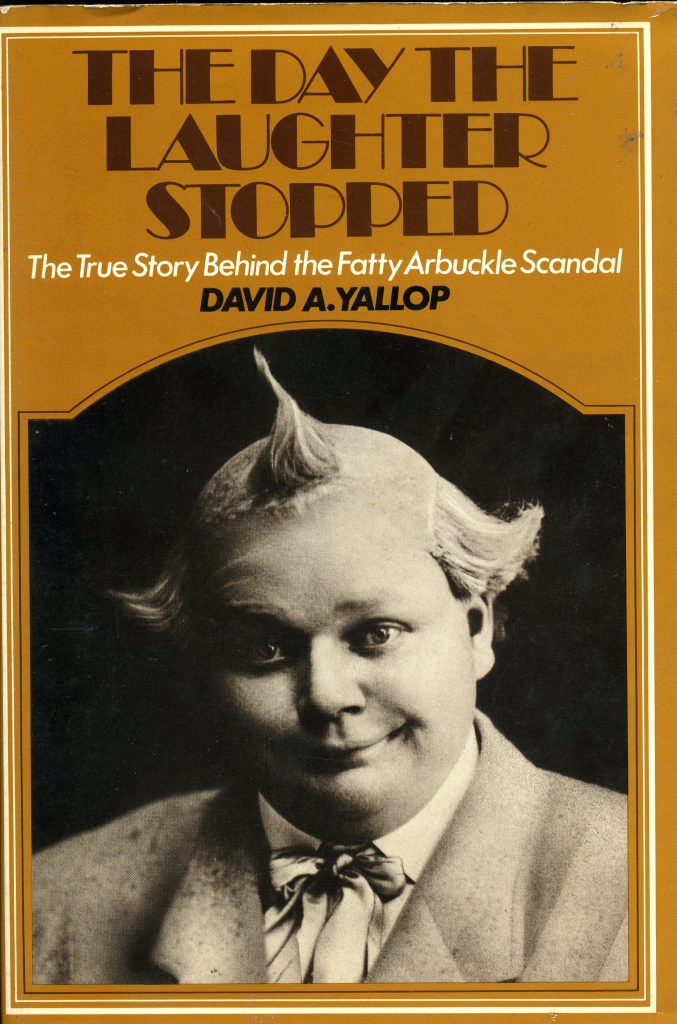 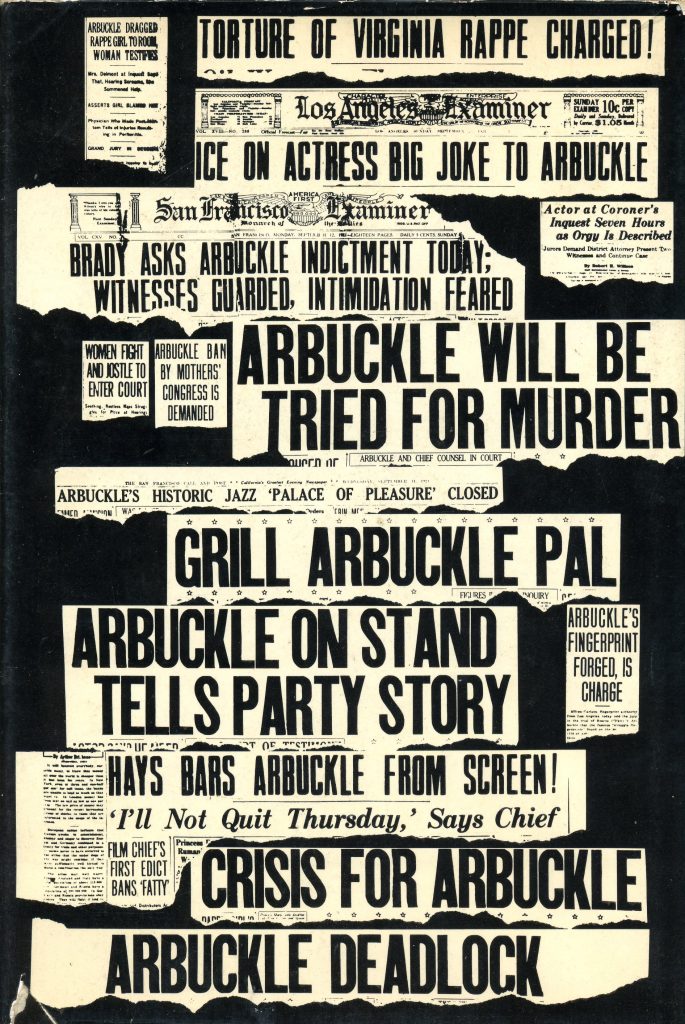 Roscoe “Fatty” Arbuckle and the story of his tragedy.

Buster Keaton said that the day the laughter stopped was September 5, 1921 – the day that Virginia Rappe became ill during a party in Roscoe “Fatty” Arbuckle‘s suite at the St. Francis Hotel in San Francisco. She died four days later as a result of her illness, peritonitis caused by a ruptured bladder. Mr. Arbuckle had nothing to do with Ms. Rappe’s illness and death, but he paid with his good name, his career and his happiness nonetheless. He was tried three times, by a politically motivated and extraordinarily underhanded prosecution, and was acquitted with an unprecedented apology signed by every member of the jury. This should have been more than enough to ensure his warm welcome back into film, but nothing of the sort happened. The tragedy of Roscoe Arbuckle is that he was made to be the scapegoat of a Hollywood running scared from public opinion – his guilt or innocence had become irrelevant.
This is the story that David Yallop tells in The Day the Laughter Stopped. Though the book tells the story of Arbuckle’s birth, start in show business and the years after his being sacrificed by so-called friends, the focus of this book is on the unfortunate death of Virginia Rappe, and the ham-handed attempt of the prosecutor to wrangle a political future out of the railroading of an innocent man. The problem? The prosecution had no case – its “star” witness, Maude Delmont, was lying from the onset and was easily discredited, and the doctors who examined Ms. Rappe during and after the party, and who conducted the autopsy, clearly indicated that no violence was done to her. The question, of course, is why she didn’t receive proper surgical medical care in the first place, but due to the passage of time I suppose that query will forever go unanswered.
When Mr. Yallop began research for this book, all three of Mr. Arbuckle’s wives were still living, and were eager to share their stories with him. Even Minta Durfee and Doris Deane, whose marriages with him ended in divorce, remembered him with great love. Indeed, all who were still around to be interviewed by Mr. Yallop had positive and kind things to say about the gentle, generous Roscoe Arbuckle.
This is an indispensable and devastating text in the study of the trial and the nature of Hollywood politics in the 20’s. Simple common sense and a rudimentary review of the facts indicate that Roscoe Arbuckle was completely innocent – this book makes it abundantly clear. It is a shame that Mr. Yallop has not written further titles regarding the silent era – his voice would be more than welcome. My only quibble, and it is a tiny one, is that there is some gratuitous foreshadowing in the “Before” section of the book – chances are that anyone who awaited this book’s arrival knew that its main focus was the events following September 5, 1921, and didn’t need to be reminded of the sadness just around the bend during Roscoe’s happy times.
~ ~ ~ ~ ~
REVIEWS
This book should be the end of all the scandal regarding the case of murder against Roscoe Fatty Arbuckle. The author lays it all out so well that there is no question that Arbuckle had absolutely nothing to do with the death of Virginia Rappe. That is not to say this is not as interesting as the dirty little stories that others have told about this case, it is just that this happens to be the truth! I highly recommend this book!!!
~ ~ ~  ~ ~

David Yallop is a film and television writer. He spent more than three years writing this book. The `Acknowledgments’ thank the many who helped in this 1976 book. There is a `Filmography’ by Samual A. Gill, and a `Bibliography’. The `Preface’ presents the testimony given by Maude Delmont. She accused Roscoe Arbuckle of murdering Virginia Rappe. Delmont never testified in court because her story was all lies. District Attorney Matthew Brady knew this as he prosecuted Arbuckle. Most people know of the legend of Arbuckle as a murderer with a Coke bottle. It ruined the career of Arbuckle, one of the most popular comedians of Hollywood, and was followed by a national board of censors. Arbuckle was the first actor to be blacklisted (p.261).

Part 1 has the history of Roscoe and show business. Originally all American films were made on the East Coast (p.25). California had better weather and light, and a varying landscape (p.25). There was a wide-open free market for films in the early days (p.27). Mack Sennett was an inventive pioneer who recorded real events for future films (p.40). Roscoe was enormously popular in American, but also in Great Britain, France, Italy, Germany, and elsewhere (p.47). The “true story of what happened in Boston” begin on page 67, when Roscoe “was still a sick man”. Roscoe “is not now considered one of the greatest silent film comedians because most experts have never had the chance to see the best of his works” (p.83). Roscoe was a deputy sheriff (p.86). There was a famous dinner party (pp.87-90). 1921 saw the beginning of the Depression (p.96). [Due to falling agricultural prices.]

Part 2 tells about the St. Francis Hotel that survived the earthquake and fire of 1906. Roscoe picked the best hotel in town. Yallop interviewed many of the people who were involved, and read thousands of pages from the six proceedings to construct what happened on September 5, 1921 (p.109). Pages 108 to 128 end with Virginia’s death. Yallop says medical malpractice killed her. An illegal post-mortem removed organs that could tell of an abortion. The death caused reporters to investigate the story for The Front Page. Theaters began to drop Roscoe’s films (p.135). Lawyer Frank Dominguez advised Roscoe to answer no questions at the Hall of Justice (p.136). [This prevented the creation of prosecutorial perjury.] The reports in the Hearst Press was “criminally irresponsible” (p.138). Was Hearst the only millionaire to use gangsters (p.140)?

Was the scandal about Roscoe meant as a diversion from the economy (p.141)? Censorship of Chaplin (p.143)? Lehrman made up stories (p.145). Delmont made up stories (p.149). D.A. Matthew Brady knew that Roscoe was guiltless but prosecuted anyway (p.152). They tried to put words into one witness (pp.162-165). Brady knew he didn’t have a case (p.186)! Arbuckle’s films were banned in Great Britain and elsewhere, but not in France (p.191). [Is there some human flaw that causes people to hate what they once loved (p.194)?] Was the incident a variation of the “badger game” (p.196)? Maude Delmont played this game before (p.197). Brady refused to let her testify (p.198). A fickle public now cheered Arbuckle (p.202). Private detectives guarded Roscoe (p.207). Finally, the third jury acquitted Roscoe in five minutes because there was no proof (p.253).

Part 3 asks why an innocent man ws banned from movies (p.259). Will Hays was a puppet of Adolph Zuckor (p.260). The acquittal and the ban shattered Roscoe (p.264). He worked behind the scenes (p.265). Popular support ended the ban (p.266). But there were objections (p.267). [How wise are those moral leaders who would condemn an accused innocent (p.268)?] Billy Sunday said the ban was evil (p.272). The film “Sherlock Jr.” was based on the trial (p.278). There was another important case about the morals of a plaintiff (p.279). The rest of the book tells about Roscoe’s last years. Roscoe made comedy shorts in 1932 and was prepared to return to features when he died in his sleep (p.294). [Was there a need for comedy during the Great Depression?] The `Epilogue’ tells how the ban on Roscoe’s films continued long after his death (p.299). [Andy Edmonds’ book explains why the event was a frame-up.]