Phenomena: The Secret History of the U.S. Government’s Investigations into Extrasensory Perception and Psychokinesis 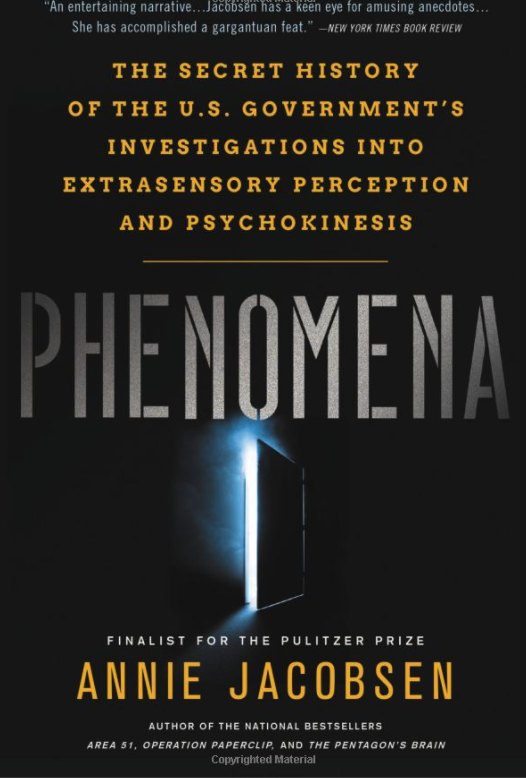 The definitive history of the military’s decades-long investigation into mental powers and phenomena, from the author of Pulitzer Prize finalist The Pentagon’s Brain and international bestseller Area 51.

This is a book about a team of scientists and psychics with top-secret clearances.

For more than forty years, the U.S. government has researched extrasensory perception, using it in attempts to locate hostages, fugitives, secret bases, and downed fighter jets, to divine other nations’ secrets, and even to predict future threats to national security. The intelligence agencies and military services involved include CIA, DIA, NSA, DEA, the Navy, Air Force, and Army-and even the Joint Chiefs of Staff.

Now, for the first time, New York Times bestselling author Annie Jacobsen tells the story of these radical, controversial programs, using never before seen declassified documents as well as exclusive interviews with, and unprecedented access to, more than fifty of the individuals involved. Speaking on the record, many for the first time, are former CIA and Defense Department scientists, analysts, and program managers, as well as the government psychics themselves.

Who did the U.S. government hire for these top-secret programs, and how do they explain their military and intelligence work? How do scientists approach such enigmatic subject matter? What interested the government in these supposed powers and does the research continue? PHENOMENA is a riveting investigation into how far governments will go in the name of national security.

“With Phenomena, Annie Jacobsen has once again produced an utterly absorbing and brilliantly reported chronicle that truly breaks new ground. This is a boundary-breaking story of mental phenomena-extra sensory perception techniques-that is truly a pleasure to read. A mind-bending triumph!” ―Alex Kershaw, bestselling author of ‘The Liberator’ and ‘Avenue of Spies’.

“Annie Jacobsen has written an entertaining narrative of the many salaried people in our government who have supported the exploration of psychic phenomena…Much of the information presented is already known, but Jacobsen has accomplished the gargantuan feat of bulldozing it all into one place. She has a keen eye for amusing anecdotes and writes them up with convincing detail. More than that, Jacobsen has arranged her story in a kind of nonfiction picaresque novel.” ―Dick Teresi, New York Times Book Review

“Annie Jacobsen is back with a new tome that should entice anyone who doesn’t mind thinking outside the box; or as referenced in her book, as if there is no box….Not only is it a well-researched and fascinating tale, but there are some lessons for anyone wanting to truly break the mold in business.”―Simon Constable, Forbes

Tallulah Bankhead--Trip to the Automat, 1957 TV