When I was a student at SVA studying Film Production I spent a day walking around the neighborhood and found a film set which had been created on West 26th Street. They had reconstructed an old 1920’s neighborhood to film “The Night They Raided Minsky’s”. I was really taken by the work they did on that block. It made it ‘old’ and remarkably believable. The set even included an elevated train and track.  Here is the book the film was based on. 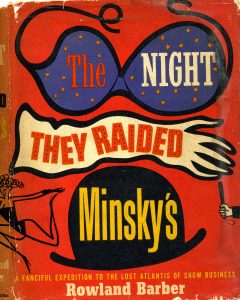 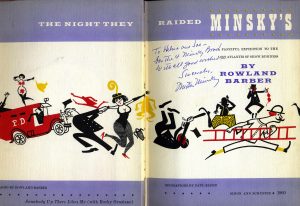 My signed copy of the original hardcover copy. ‘Morton Minsky’!

Text from inside front cover flap.

In response to the perennial pleading voice from the rear – here is the book that does it. It takes off the dark curtain that, these 35 years, had shrouded the great American institution of burlesque.

It brings back the days of Minsky Brother’s pleasure palace on New York City’s Lower East Side, where, for three bits, you could feast your eyes on those Risque, Frisque Minsky models; those Union Suit teasers; those Naughty-Night Girls and those 13 Luscious Peaches on an Illuminated Runway of Joy.

It puts you in the audience. Around you are the neigborhoodniks (with salami lunches and a change of socks) and the Uptown crown, among whose regulars are Robert Benchley, Edmund Wilson, John Dos Passos, e.e. cummings and Otto Kahn.

It gives you, in short, an uncensored look at the unclad, unblushing Eden that was burlesque in the days when funny men were funnier, girls were girlie-er, and the only G-string in the house was on the Pro-fes-sor’s fiddle. You see the strange extravaganza, eavesdrop on the dressing-room conversations, kibitz the permanent floating pinochle game of the backstage area, case the house as the money is made and lost. You meet one of the most fantastic casts ever assembled between hard covers, includingL:

Leon Trotsky (in person), who just happened to be around.

Billy Minsky, the Bantam Barnum of Burlesque, who masterminded the whole shebang.

It is a tantalizing, provocative, wildly entertaining. And the sensational, full cast, five-star Grand Finale is reenacted before your very eyes as the Society for the Suppression of Vice picks April 20, 1925, for the historic NIGHT THEY RAIDED MINSKY’S.

The author Roland Barber also co-wrote “Harpo Speaks” with Harpo Marx and “Somebody Up there Likes Me – My Life So Far” with fighter Rocky Graziano.

The book was made into a film (directed by William Friedkin) in 1968.

In the book Minsky’s Burlesque, Morton Minsky (with Milt Machlin) wrote, “As for April 20, 1925, the day that the raid on which the book was based took place, it was hardly epochal in the history of burlesque, but it did turn out to be a prelude to much greater troubles… Anyway, the raid story was fun, but the raid itself was simply one of the dozens to which we had become accustomed; certainly no big crisis.”

Minsky’s theater, the National Winter Garden on Houston Street, was raided for the first time in 1917 when Mae Dix absent-mindedly began removing her costume before she reached the wings. When the crowd cheered, Dix returned to the stage and continued removing her clothing to wild applause. Billy Minsky ordered the “accident” repeated every night. This began an endless cycle; to keep their license, the Minskys had to keep their shows clean but to keep drawing customers, they had to be risqué. Whenever they went too far, however, they were raided.

According to Morton Minsky, Mademoiselle Fifi was a woman named Mary Dawson from Pennsylvania. Morton Minsky suggests that Billy Minsky persuaded Dawson to expose her breasts to create a sensation. By 1925, it was permissible for girls in legitimate shows staged by Ziegfeld, George White and Earl Carroll—as well as burlesque — to appear topless as long as they didn’t move (as a “living tableau”). Mademoiselle Fifi stripped to the waist but then moved, triggering the raid. “Although the show, in general, had been tame,” he wrote, “Fifi’s finale and the publicity that soon followed the raid ensured full houses at the soon-to-be-opened [Minsky’s] theater uptown [on 42nd Street].”

In 1975, Dawson, then 85, refuted the legend. “I was never a stripteaser. I never did anything risque.” She said that novelist Rowland Barber “just put all that in the book to make it better.” She wasn’t even at the theater that night. Her father was a policeman and a straitlaced Quaker, although he never came to New York City and never led a raid on one of the Minsky burlesque houses.