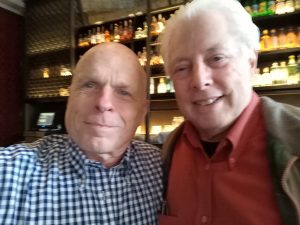 While visiting San Francisco I met up with Leonard Pitt. A former student of Etienne Decroux, prolific writer, performer, teacher and collector of all things ‘Paris’. He gave me a copy of one of his books  ‘My Brain on Fire’ and I can’t recommend it enough. Wonderful reading! 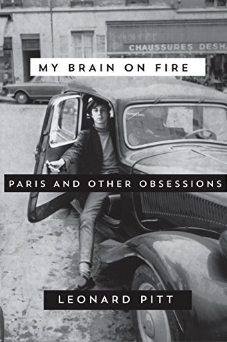 This is Leonard Pitt’s story of growing up the misfit in Detroit in the 1940s and 50s. In a later age he would have been put on Ritalin and paraded before psychiatrists because he couldn’t pay attention in school. In 1962, at the end of a misguided foray towards a career in advertising he took the ultimate cure, a trip to Paris. He thought it would only be a visit. He stayed seven years. There in the City of Light, Leonard’s mind exploded. And it hasn’t stopped since.

Studying mime with master Etienne Decroux and living in Paris were the university he never knew. This inspiration unleashed a voracious appetite to understand the “why” of things. He asked a simple question, “Why did the ballet go up?” While building a theatre career performing and teaching, he embarked on a quest to study the origins of the ballet, the history of early American popular music, the pre-Socratic philosophers, early modern science, the European witch hunt, the history of Paris, and more. To his unschooled mind it all fits together. Who would see a historical arc between Louis XIV and Elvis Presley? Leonard does. And he’ll tell you about it.

“What makes reading Pitt’s book so enjoyable is not only following the intellectual leaps he makes between his many and varied topics of interest. It is also seeing the creative connections among apparently unrelated subjects such as Louis XIV, Elvis Presley, and the Hula Hoop. From start to finish, Pitt’s memoir is a lively autodidactic romp through a life well-lived in both mind and body.”—Kirkus

Leonard Pitt is an actor and author. He has written two books on Paris, Walks Through Lost Paris and Paris Postcards: The Golden Age, plus A Small Moment of Great Illumination, Searching for Valentine Greatrakes the Master Healer. He currently teaches physical theater in Berkeley. He has performed and taught around the world and lives in Berkeley, California.

Vaudevisuals interview with Tommy Galan - "Look at What We Found"