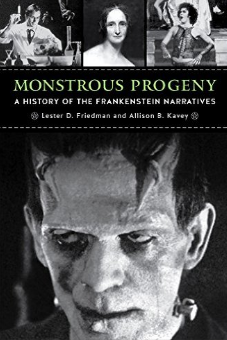 Mary Shelley’s 1818 novel Frankenstein is its own type of monster mythos that will not die, a corpus whose parts keep getting harvested to animate new artistic creations. What makes this tale so adaptable and so resilient that, nearly 200 years later, it remains vitally relevant in a culture radically different from the one that spawned its birth?
Monstrous Progeny takes readers on a fascinating exploration of the Frankenstein family tree, tracing the literary and intellectual roots of Shelley’s novel from the sixteenth century and analyzing the evolution of the book’s figures and themes into modern productions that range from children’s cartoons to pornography. Along the way, media scholar Lester D. Friedman and historian Allison B. Kavey examine the adaptation and evolution of Victor Frankenstein and his monster across different genres and in different eras. In doing so, they demonstrate how Shelley’s tale and its characters continue to provide crucial reference points for current debates about bioethics, artificial intelligence, cyborg lifeforms, and the limits of scientific progress.
Blending an extensive historical overview with a detailed analysis of key texts, the authors reveal how the Frankenstein legacy arose from a series of fluid intellectual contexts and continues to pulsate through an extraordinary body of media products. Both thought-provoking and entertaining, Monstrous Progeny offers a lively look at an undying and significant cultural phenomenon.
~ ~ ~ ~ ~
“Written in a most accessible style even as it presents a complicated history and series of analyses, Monstrous Progeny combines discussion of the original Frankenstein with issues of adaptation in theater, literature, cinema, and other media.”

Rick Worland author of The Horror Film: An Introduction)

“This lively and exciting analysis of the Frankenstein narratives, as found throughout literature, film, and cultural history, has an epic scope and depth.  A tremendously impressive accomplishment.”