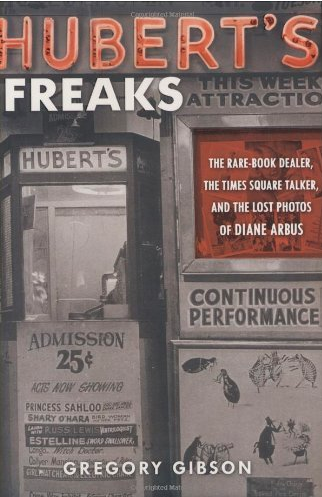 HUBERT’S FREAKS: The Rare-Book Dealer, the Times Square Talker, and the Lost Photos of Diane Arbus by Gregory Gibson

From the late 1950s until her death in 1971, renowned photographer Diane Arbus took pictures of oddball performers at the now-forgotten Hubert’s Museum, a typical freak show in New York City’s seedy Times Square. One frequent subject was Charlie Lucas, first a freak himself, later an inside talker. In 2003, Bob Langmuir, an anxiety-ridden, pill-popping, obsessive antiquarian book dealer from Philadelphia, unearthed a collection of photographs and memorabilia, including Lucas’s journals and what he thought was Arbus’s photos. This trove of genuine American kookiness came to dominate his life. Following Langmuir’s quest—from the slums of Philadelphia to the halls of the Metropolitan Museum of Art—as he gathered, priced and ultimately came to understand this collection, author Gibson (Gone Boy), himself an antiquarian book dealer, effortlessly twists these strands together with an emotional wallop. His toil in Hubert’s vineyard, Gibson writes of Langmuir, amounted to no more or less than the continuing archaeology of the old, weird America. Gibson’s laser focuses on Langmuir’s shifting state of mind as he struggles to master his personal demons and navigate the pitfalls of his own obsession gives this story its heart and opens a window onto a lost part of the American soul. 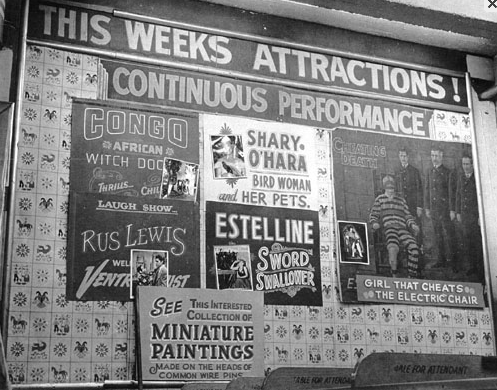 “Certainly, the freaks appealed to Diane Arbus. She counted performers like Suzy the Elephant Skin Girl among her friends, and she was fascinated with the ritualized goof of an act like that of Congo the Jungle Creep, so bad it was good. At the same time, she was completely serious in her study of this archaic form of American entertainment. In her 1962 application for a Guggenheim Fellowship, she listed sideshows as one of her subjects and mentioned: “Hubert’s Dime Museum and Flea Circus” among her working locations.

Revelations published a 1956 photo of the entrance to Hubert’s showing the upstairs penny arcade and Hubert’s ticket booth, bright lights and skeeball, posters advertising Susie the Elephant Skin Girl, Lydia Suarez the contortionist, and Princess Sahloo (aka Woogie.) Behind it all, off to the left, was the stairway leading down to that strange world.”

Listen to the Grind Tape

From the moment Bob Langmuir, a down-and-out rare book dealer, spies some intriguing photographs in the archive of a midcentury Times Square freak show, he knows he’s on to something. It turns out he’s made the find of a lifetime–never-before-seen prints by the legendary Diane Arbus. Furthermore, he begins to suspect that what he’s found may add a pivotal chapter to what is now known about Arbus as well as about the “old weird America,” in Greil Marcus’s phrase, that Hubert’s inhabited.

Bob’s ensuing adventure–a roller-coaster ride filled with bizarre characters and coincidences–takes him from the fringes of the rare book business to Sotheby’s, and from the exhibits of a run-down Times Square freak show to the curator’s office of the Metropolitan Museum of Art. Will the photos be authenticated? How will Arbus’s notoriously protective daughter react? Most importantly, can Bob, who always manages to screw up his most promising deals, finally make just one big score?

This book is about the relationship between Hubert’s and Diane Arbus and her photography of the performers that worked at Hubert’s. A page-turner for those interested in the art world and the sideshow world and where they meet.