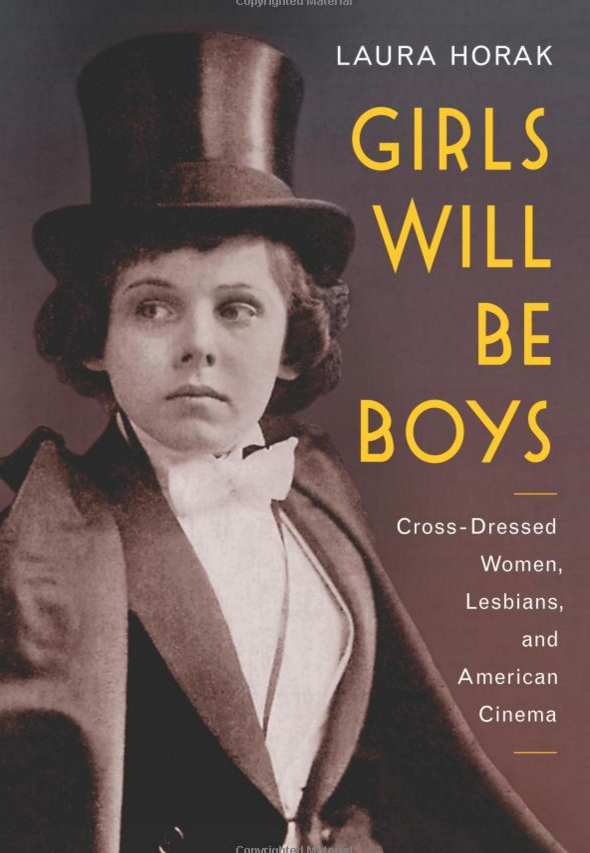 “Girls Will be Boys” by Laura Horak

Marlene Dietrich, Greta Garbo, and Katharine Hepburn all made lasting impressions with the cinematic cross-dressing they performed onscreen. What few modern viewers realize, however, is that these seemingly daring performances of the 1930s actually came at the tail end of a long wave of gender-bending films that included more than 400 movies featuring women dressed as men.

Laura Horak spent a decade scouring film archives worldwide, looking at American films made between 1908 and 1934, and what she discovered could revolutionize our understanding of gender roles in the early twentieth century. Questioning the assumption that cross-dressing women were automatically viewed as transgressive, she finds that these figures were popularly regarded as wholesome and regularly appeared onscreen in the 1910s, thus lending greater respectability to the fledgling film industry. Horak also explores how and why this perception of cross-dressed women began to change in the 1920s and early 1930s, examining how cinema played a pivotal part in the representation of lesbian identity.

Girls Will Be Boys excavates a rich history of gender-bending film roles, enabling readers to appreciate the wide array of masculinities that these actresses performed—from sentimental boyhood to rugged virility to gentlemanly refinement. Taking us on a guided tour through a treasure-trove of vintage images,Girls Will Be Boys helps us view the histories of gender, sexuality, and film through fresh eyes.

“Horak has produced a meticulously researched, astutely argued, and highly readable text … her use of archival materials is impeccable and her filmic and historical analyses clearly display a nuanced understanding of her topic.”   Publishers Weekly
~ ~ ~ ~ ~
“Girls Will Be Boys is an excellent work of film scholarship, meticulously researched and expertly presented, while still being an approachable and enjoyable read for the diligent non-academic reader. This is a wonderful book for those cinephiles who take an interest in how gender and sexuality have been presented throughout film history, and for social historians who recognize the important role cinema has played over the last century in shaping popular perspectives on gender and sexuality. Laura Horak has written an informative and necessary book.”

~ ~ ~ ~ ~
LAURA HORAK is an assistant professor of film studies at Carleton University, Ottawa, Canada. She is also the coeditor of an award-winning book, Silent Cinema and the Politics of Space.
~ ~ ~ ~ ~