I usually post ‘The Vaudevisuals Bookshelf’ once a week but this week is ‘Special’.

The publication of Noah Diamond’s new book “Gimme A Thrill“.

I will let you read the text on Amazon since I am a photographer mostly!

A BROADWAY LEGEND OF 1924 Includes more than eighty rare photographs, some published here for the first time. Before they made the films which are their principal legacy, the Marx Brothers were the stars of three Broadway musicals in the 1920s. Two of these, The Cocoanuts and Animal Crackers, are popular classics, familiar from the Brothers’ immortal film versions, and from numerous stage revivals. But the boys’ 1924 Broadway debut, I’ll Say She Is, was never filmed or revived, and it slipped through history’s fingers. Although it was the most successful thing the Marx Brothers ever did on stage, it was unseen for ninety years after the original production closed, and has been considered a lost work. In 2009, writer, performer, lyricist, and Groucho Marxist Noah Diamond began a seven-year odyssey which led to the restoration, adaptation, and finally the historic first revival of this legendary entry in the Marx and musical theatre canons. Gimme a Thrill tells the whole story for the first time—the complete history of I’ll Say She Is from 1923 to 2014. Noah Diamond adapted the book and lyrics for I’ll Say She Is and has a long history of playing Groucho, on and off the stage. He is among the organizers of Marxfest New York City’s Marx Brother’s festival and has written and lectured widely on the Marxes and their work. With his partner Amanda Sisk, he wrote and produced the Nero Fiddled musicals, a series of political satires. His previous books are 400 Years in Manhattan and Love Marches On. 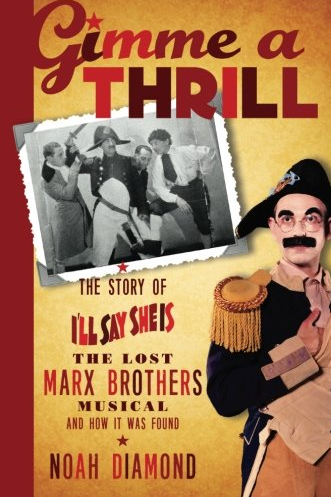 I first met this very talented Mr. Diamond while shooting an episode of the wonderful series ‘Vaudephone‘ which I co-produced with Trav SD. Here is Noah performing for us “The United Nations Song” for that series.

So now you can see why you should buy this book! Noah is brilliant in whatever he puts his mind to. And by the way you would be doing yourself a great disservice if you didn’t see the show coming this year.

Here is Noah talking about the Marx Brothers and I’ll Say She Is during a Vaudevisuals interview.

OK! Go see the show when it opens and here is the information for you to buy his new book!