Cliff Edwards was the voice of “Jiminy Cricket” and has his own brand of playing the Ukulele. Born June 14th, 1895 as Clifton Avon Edwards (soon to be known as Ukulele Ike) he was an American singer, actor and voice actor who enjoyed considerable popularity in the 1920s and ear;y 1930s, specializing in jazzy renditions of pop standards and novelty tunes. He had a Number One hit with “Singing in the Rain” in 1929. He did many animated cartoon voices but he is best known for “Jiminy Cricket” in Walt Disney‘s ‘Pinocchio‘ (1940). 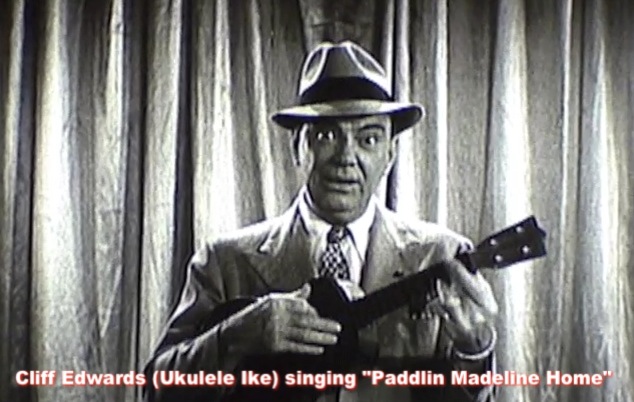 A scene from the film “Hollywood Revue of 1929” with Cliff playing the Uke.

Here is Cliff Edwards singing the opening song of the film ‘Pinocchio by Jiminy Cricket. Lyrics by Ned Washington who received an Oscar for it.

Here is a wonderful clip from the 1935 short film “Starlit Days at The Lido”. Featured is Cliff Edwards singing ‘We Gotta Get Together’ but sitting next to him is Suzy Wandas. Considered to be one of the best ‘slight of hand‘ artist ever. She was born in Belgium as Jean Van Dyk. She could speak 5 languages and performed in Europe and America for decades until she retired in 1959.

In a funny scene from 1933 with James Dunn looking on, he sings the wonderful “I Did It With My Ukulele”.

In case you haven’t seen enough of this charming and funny uke musician here is a somewhat corny short bio.

Hannibal, Missouri is the home of Mark Twain. But also the home of Cliff Edwards. Here is a humorous short bio of Cliff.

Magic at Coney! Every Sunday at Noon...