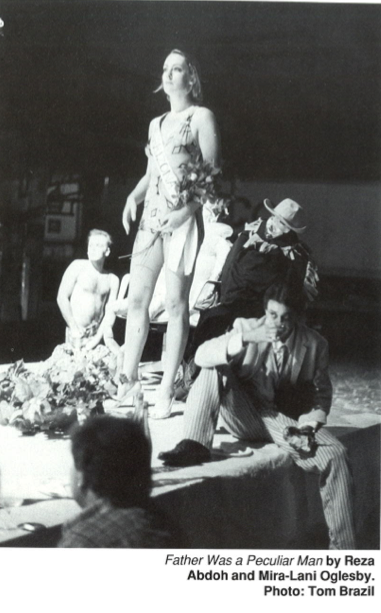 from interview with Reza Abdoh by Tom Leabhart/Mime Journal

“Before that I did a piece in New York entitled “Father was a Peculiar Man“. The title was taken from vaudeville, which interests me a great deal. I took certain 19th century psychological realism and mixed it with vaudeville and American music hall. I’m influenced by reading about vaudeville, and also by television performers of the 1950’s, who were vaudevillians: Jack Benny, Art Carney, Jackie Gleason. My hero is Buster Keaton, one of the great American artists. In fact, he is a character in “Father Was a Peculiar Man”. The point of departure for Father is The Brothers Karamazov; it deals with the family as a degenerating unit. We were dealing with things I’m obsessed with, like the killing of authority, in several different stages. The trajectory of the piece started with the killing of father, patricide in the family, Karamazov; then, killing of the king, the president, the assisination of J.F.K,; the the killing of God, in the crucifixion. In the end there was a redemptive act, when after the crucifixion the audience and the actors sang “Dream a Little Dream” together. There were 60 performers, an entire marching band and it took place in 4 street blocks of the meat packing district in New York. It is an area of cobblestone streets, abandoned storefronts and meat warehouses; it is very dark and it’s all about what is happening behind closed doors in the psychic underbelly of the streets. The piece took place in some abandoned slaughter houses where you could still see the dry brown ask which remained from the blood that had been spilled there. That’s where the vision of heaven and hell was created. The characters were J.F. Kennedy, Jackie O., Buster Keaton, Karamazov.” 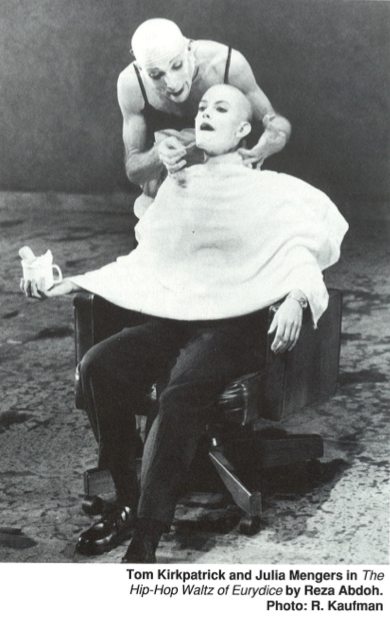 “The original impulse behind ‘The Hip Hop Waltz of Eurydice” was my gut reaction to systematic repression and erosion of freedom taking place around me. Instead of feeling helpless about it I decided to create a piece. I think I am on a multi-track; I never think mono. Art today needs to have a holistic nature; it’s not the time for atomistic, Newtonian approach to art. I don’t believe in creating work that is too easily digestible. It’s important to create work that resonates in every aspect of one’s personal and universal self. That impulse grew into different aspects of the piece. “Hip Hop” summarizes what my struggle has been with my work in the last eight years or so. There are certain themes, certain preoccupations,  certain obsessions, dreams, nightmares that I’ve had continuously which somehow were tied together in this piece, but not necessarily resolved.

“A spiritual pidgeonholing takes place in this culture; it is a feeling of my God as opposed to your God. Spiritual entrapment is shown in the spear shaking of morality in the name of decency. What is decent is to care about people, not to thumbtack them on the wall and say this is this and that is that.”

ABOUT REZA ABDOH (Excerpt from the Kickstarter Campaign)

Reza Abdoh (1963-1995) was an Iranian-born American director and playwright known for his large-scale, experimental theatrical productions. A prolific artist even in his short, creative life, Abdoh died of AIDS in 1995 at the age of 32, having created an impressive body of stage spectacles known for their sensory overload, ferocious energy and hallucinatory dreamscapes. With his company Dar A Luz, formed in 1991, Abdoh created plays that have made a major impact on experimental theatre worldwide. 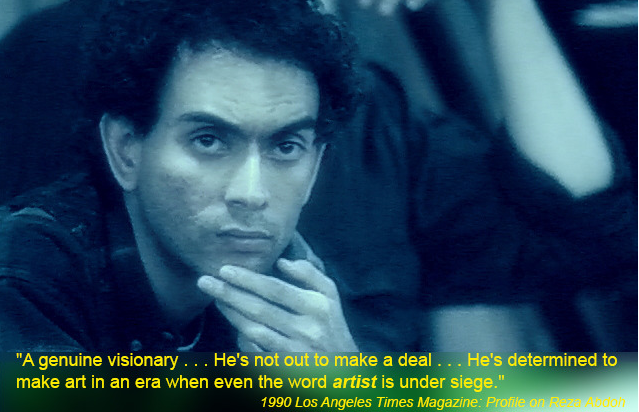 Adam Soch is making a documentary film about Reza’s work. He has been documenting Reza’s work for 30 years and needs your support.

Here is the link to the Kickstarter video/site.