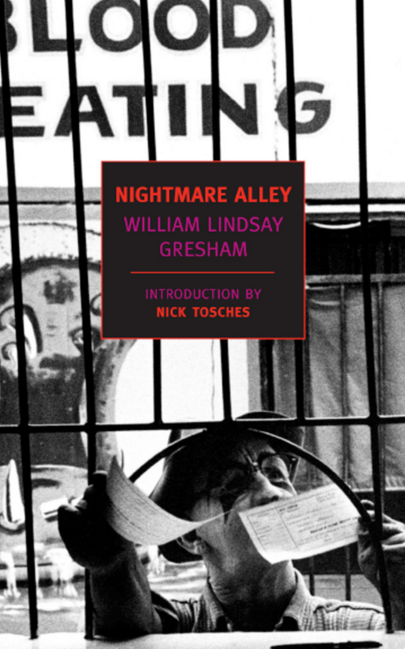 Nightmare Alley begins with an extraordinary description of a freak-show geek—alcoholic and abject and the object of the voyeuristic crowd’s gleeful disgust and derision—going about his work at a county fair. Young Stan Carlisle is working as a carny, and he wonders how a man could fall so low. There’s no way in hell, he vows, that anything like that will ever happen to him.

And since Stan is clever and ambitious and not without a useful streak of ruthlessness, soon enough he’s going places. Onstage he plays the mentalist with a cute bimbo (before long his harried wife), then he graduates to full-blown spiritualist, catering to the needs of the rich and gullible in their well-upholstered homes. It looks like the world is Stan’s for the taking. At least for now.

Mr. Gresham yanked the reviewer into the midst of his macabre and compelling novel, and kept him a breathless captive until the tour was over. It’s a truly rewarding whirl through his nightmare alley, adding up to Grade—A guignol with a touch of black magic about it. If you enjoy hundred—proof evil—and a cogent analysis of same with your nightcap—then, in the words of the Ten-in-One barker, hurry, hurry, hurry!
— James MacBride, The New York Times

Gresham…wrote with vivid punch and a close understanding of the carnival world.
— Los Angeles Times