When you think of jobs that have gone the way of the dodo, certain ones spring to mind right away: chimney sweeps. Switchboard operators. Bowling alley pinsetters. Organ grinders’ monkeys. Almost every flea circus ringmaster. Well, just imagine what it was like to have a career as a title card artist or title card writer in the late 1920s when talkies were coming in–it must’ve been pretty intense.

It must’ve been a little sad, too. For even though titles (or “captions,” or “subtitles,” or “leaders,” as they were variously called–today we often call them “intertitles”) were sometimes considered a tad intrusive even back then, they did evolve into their own skilled artform. 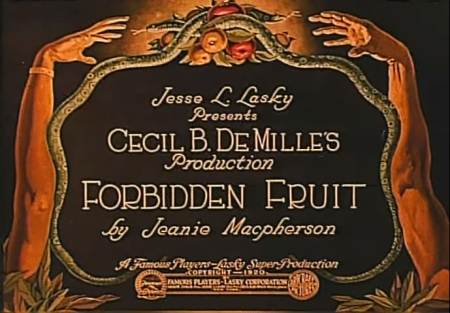 Tracking the early stages of that evolution is tough, since many of the oldest silents are missing their titles–typically the main titles. Usually this is due to being damaged by countless threadings on countless projectors, or because the film stock was cheap and didn’t hold up over time. Plus, foreign theaters often swapped English titles for ones in their own language.

From what we can tell, 1900s and early 1910s films often used plain black backgrounds with white lettering. This was the standard since they were thought to be easier on the eyes than white backgrounds (eye strain was a big concern in the early cinema dadys). Since piracy became an issue almost the second Louis Le Prince and Thomas Edison got twinkles in their eyes, studios soon began adding their logos to the titles. 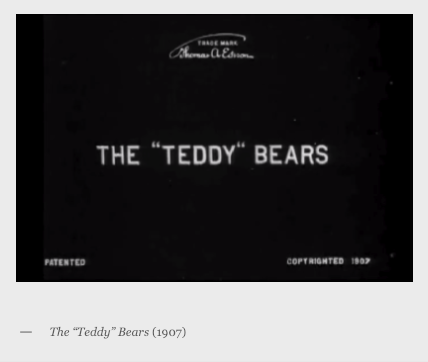 Notice the plain, sans-serif font above. As studios began churning out alarming amounts of one-reel and split-reel films, they found one of the quickest ways to make titles was to arrange simple white metal or cardboard letters on a black velvet background. There were also special printing machines available just for creating title cards, helping to further streamline the process.

At times, early titles could be a bit experimental. In this still from Alice in Wonderland(1903), the title is overlaid over a live action shot of Alice: 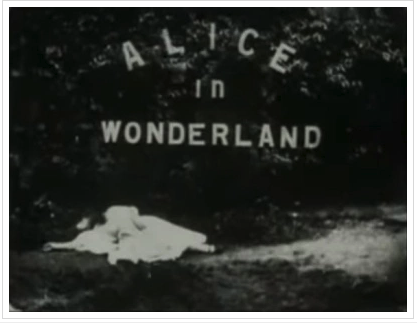 And in the famous The Great Train Robbery (1903), we see what are hand-drawn (or perhaps artfully arranged) letters complete with flourishes: 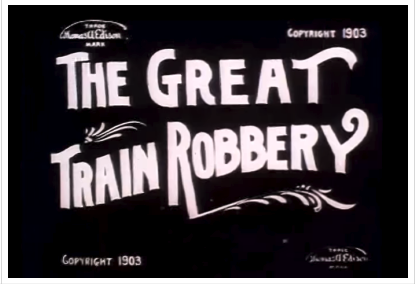 In time, studios started adopting specific templates for their titles, putting the words inside artistic frames. Each studio had their own style, whether it was the same frame for every film (like Keystone’s main titles) or several frames with similar motifs (like the work of Segundo de Chomón):

By the 1910s, film was rapidly growing more sophisticated, and so were title cards. While typed letters were still in use, hand-drawn lettering was very common since filmmakers felt it had more character. Stencils with openings for rows of words ensured everything was properly spaced and centered. Designers began utilizing more of the empty spaces, adding painterly backgrounds or “pictorial embellishments” and trying different fonts, as in this example in From the Manger to the Cross (1912): 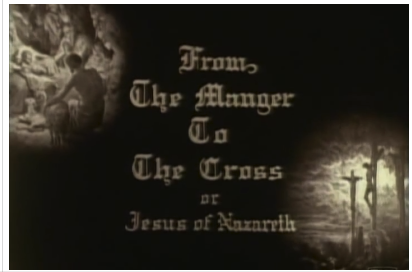 In time, someone (wish I knew who) came up with one of the most popular trends of the silent era–adding little cartoons or paintings that served as humorous illustrations or visual commentary. Slapstick comedy and light comedies especially gravitated toward these charming touches:

These kinds of “art titles” became so common that directors of “serious” dramas would sometimes deliberately opt for plain titles–a 1922 book called Photoplay Writingexplained: “There is a mighty good theory on the part of some producers that the plainly lettered title devoid of ‘art’ or the trick photography is better calculated to carry along the story, for, after all, the play is the thing!” Well, that was one opinion, anyways.

Other trends were temporary. Starting in 1912, many of the major studios would add a film’s name to the top of all its title cards. This was mainly for people who would stroll into the theater in the middle of the show (a common occurrence when films were replayed all day). It also helped solve the problem of those easily-wrecked main titles. 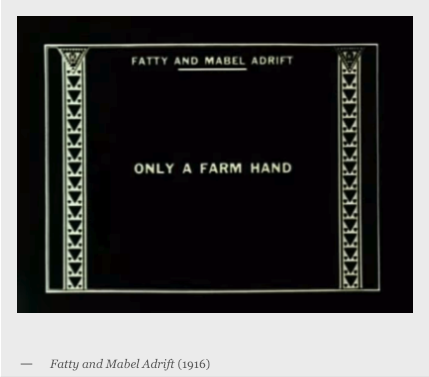 Other things like textured backgrounds became very common, a nice break from the usual black velvet. Wallpaper, watercolor paintings, wood panels, burlap, carpeting, and different types of cloth could all be used, with the actual titles superimposed using double exposures. 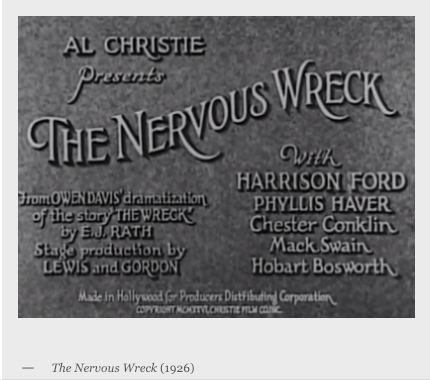 And as the plain backgrounds became more decorative, the plainer fonts of the 1900s gradually gave way to the quainter letters that we associate with silent films today. These often included modest flourishes: 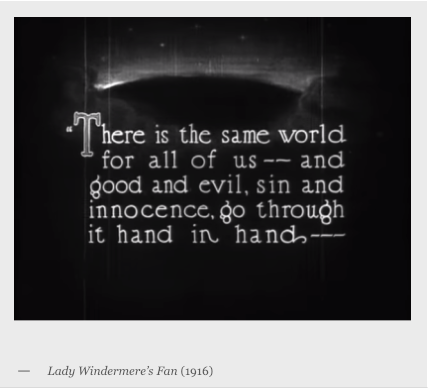 Probably the most widely-used type of lettering was what I’ve dubbed the “lazy ‘E’ font,” neat and rounded with a slightly tilted “E”. Note the extra tall “illuminated capital” in the example below, also a very common embellishment: 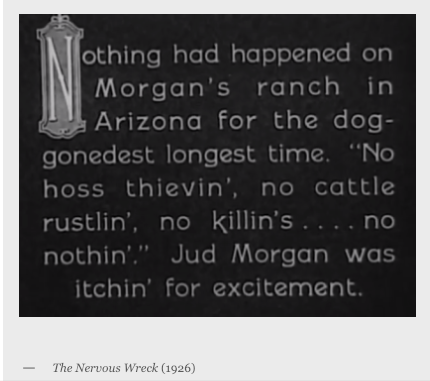 There were animated titles too, such as this famous “watery” example from Sunrise(1927): 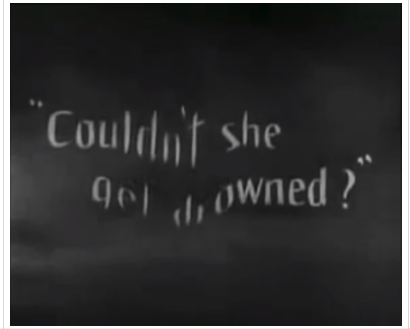 And of course, in the meantime the avant-garde world tended to do precisely what it wanted to:

Towards the end of the silent era, titles grew more slick–along with the rest of the film industry. Main titles started condensing as much information as possible, including the names of producers and directors and proclaiming the main stars with bold lettering:

Title cards did linger into the talkie era a bit, popping up sparingly in comedy shorts and dramas. And of course, the main titles were essential. But the heyday of printed captions was over, and the artists and writers responsible for them (hopefully) transitioned into set design and screenplay writing.

And that takes us to Charlie Chaplin’s Modern Times (1936), sometimes considered the very last silent film. And if we consider it the last silent film, then perhaps this is the very last official title card–a plucky message of hope as the Tramp and his love walk off hand-in-hand. For me, there is perhaps a faint tinge of nostalgia for the title card itself: 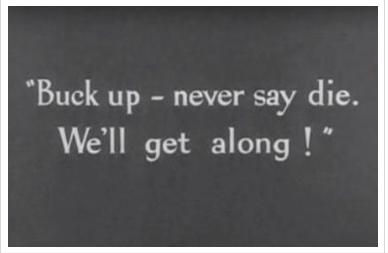 A “thank you” to historian Paul Gierucki for assisting me with some of the information on Keystone title cards!

Lea Stans writes this wonderful blog and it can be read at HERE!

Celebrating the 5th Year of SILENT-OLOGY!

Thank You for sharing your wonderful blog with my readers!

A version of this article was originally written for Classic Movie Hub, where I write a monthly column on–you guessed it–silent films. Hope you enjoy!