The Theater of Robert Anton

It must have been early 1980’s, and I was working (performing as a mime) at an upstate NY fair “German Alps Festival” at Hunter Moutain. The festival included many performers and once in awhile we would meet up after the day’s work was done and attend a show or movie together. One day puppeteer Eric Bass recommended that we see this show with puppeteer Robert Anton.

The performance was one of the most hypnotic performances I have ever witnessed! Wearing only black pants and black top he performed with a neutral facial expression while making his little puppets come alive. Since he did not allow recordings of any of his performances the work remains legendary. I will leave the details of his show to others to describe. 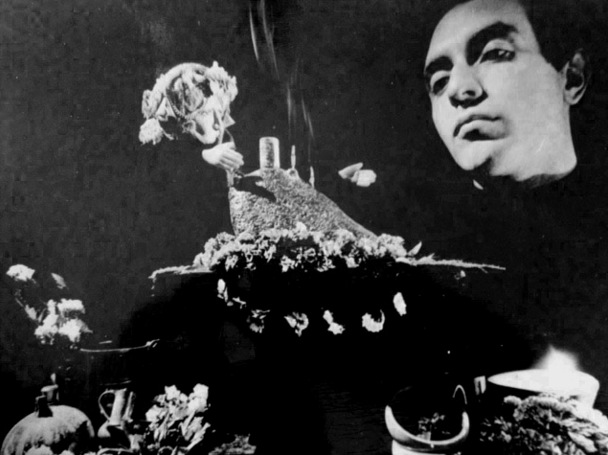 Robert Anton in one of the few photographs taken of him during his show.

– a couple of scenes from the work of Robert Anton, a beloved puppeteer of the nineteen-seventies: “Anton as puppeteer-surgeon sometimes probes his figures with a tiny forceps, pulling out a brain or a heart, or finding inside (in one show) a red stone, a red branch, a red starfish, red feathers, and red fur. In another show, a bag lady who has assembled herself out of a heap of miniature refuse peers into the puppeteer’s own mouth in search of new objects.”

Excerpt from “Puppet: An Essay on Uncanny Life” by Kenneth Gross 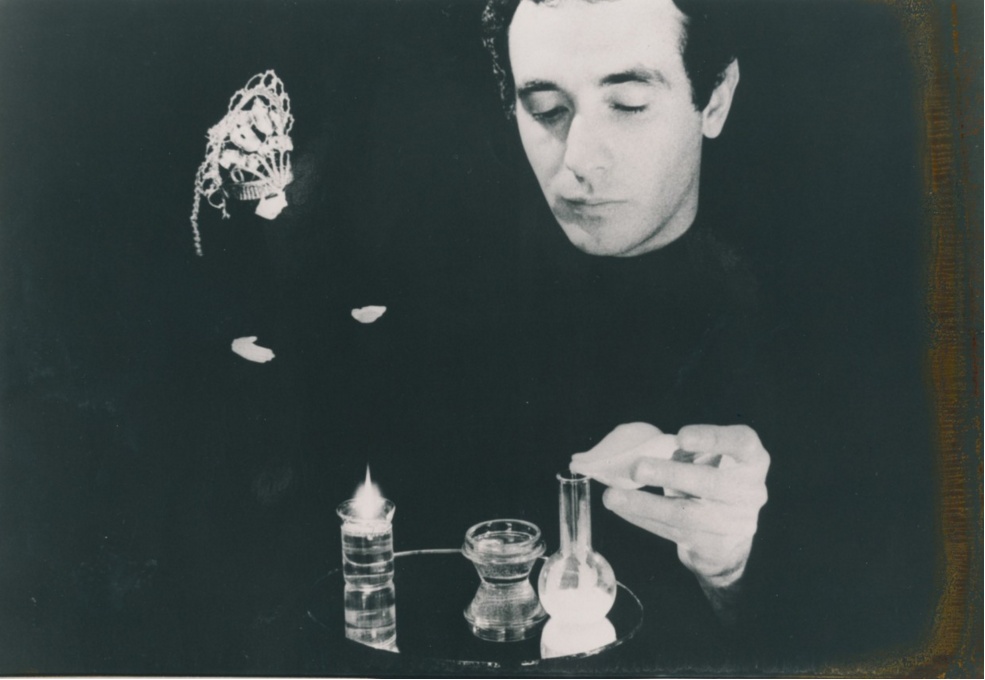 A rare photograph of Robert Anton during a performance. (Courtesy of Broadway 1602 Gallery) 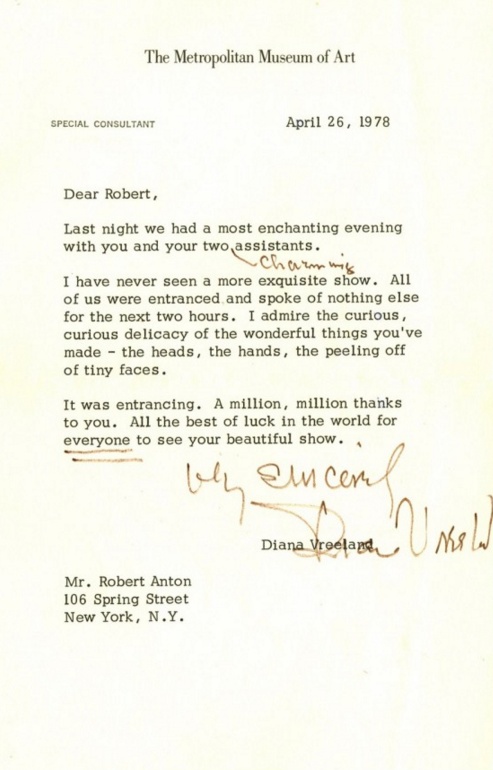 Letter from Diana Vreeland at Metropolitan Museum to Robert after one of his performances.

“A visionary theater of whose scale is inversely proportional to the scope of Robert Wilson’s vast panorama is the puppet theater of Robert Anton. Performing rituals of transformation and rebirth and original alchemical allegories with an Artaudian emphasis are miniature finger-puppet actors, whose heads are no larger than one and a half inches. They enact these silent and mysterious rites on a small black velvet stage before an audience of no more than eighteen spectators.”

“His inventions would look to him for reassurance. That was always very moving…His movements of the face were minimal, withholding of himself, a supreme actor…He could express powerful contempt: The pope with an absurd mitra, degraded to cardinal/bishop, gets closed in a jail tower in his finery…then becomes a blind man tapping. Then a horrid puppet with leather gear and a shaved head, a lot like Himmler –pisses on a target on that prison. He’s got one leg, walks with a crutch…diabolical. (Something right out of George Grosz.) Three visual artists were most important to him: Bosch, Redon and Grosz…The puppets he took to the Plaza to show Fellini…He knew Fellini’s movies inside out. The one that meant the most to him was TOBY DAMMIT, also JULIET OF THE SPIRITS…Nino Rota’s music. He unconditionally respected Chaikin and Stella Adler. When she came to his performances, she talked throughout to the puppets. …The play involved a redemption from the world, an overcoming – a metaphysical confrontation.” 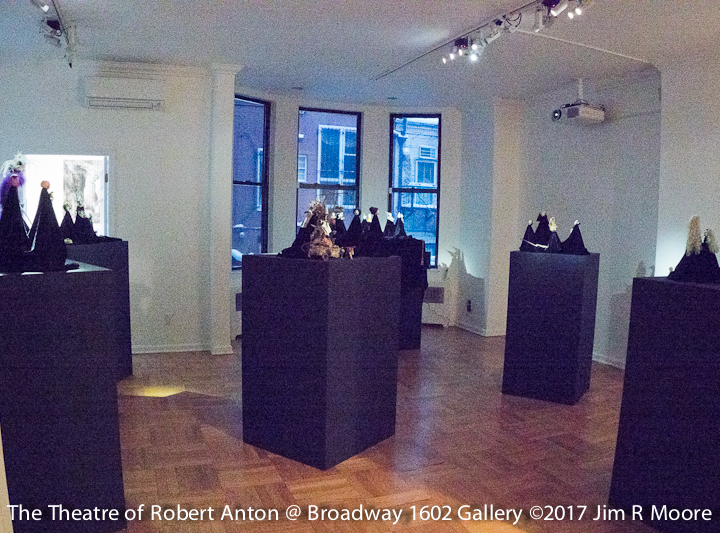 Main room of the Broadway 1602 Gallery featuring the puppets of Robert Anton. 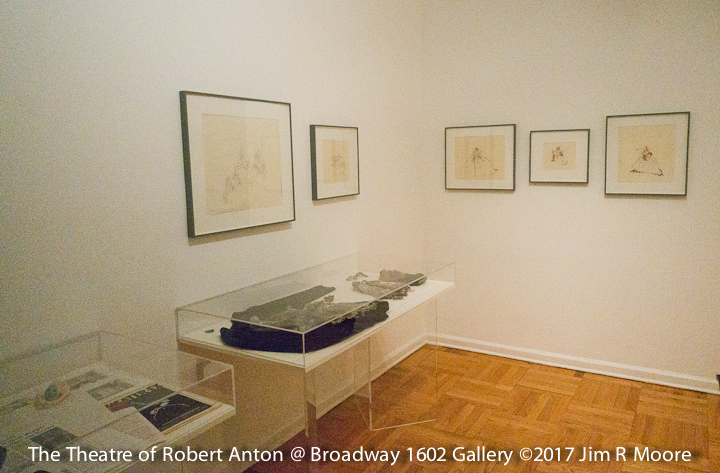 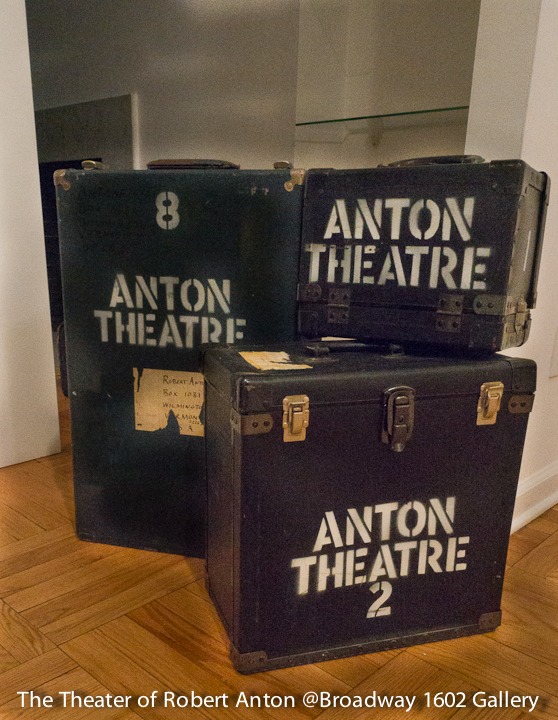 Robert Anton’s entire show was carried in these suitcases. The interiors were divided up into precisely made sections of felt backed compartments that housed the puppets and small masks/props for the show. 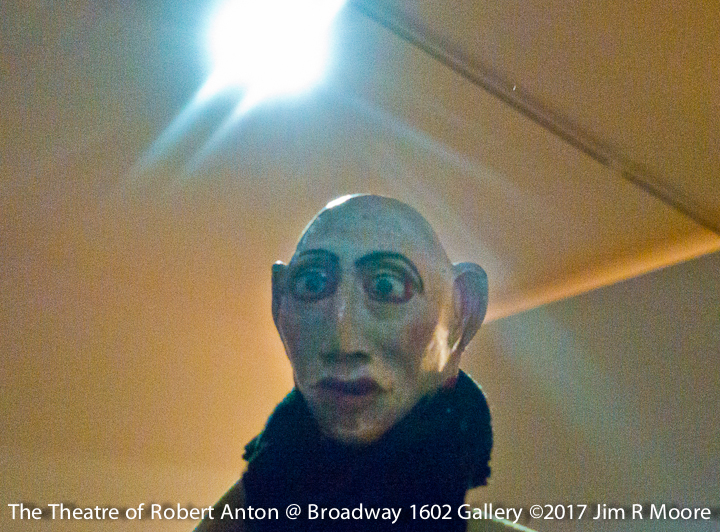 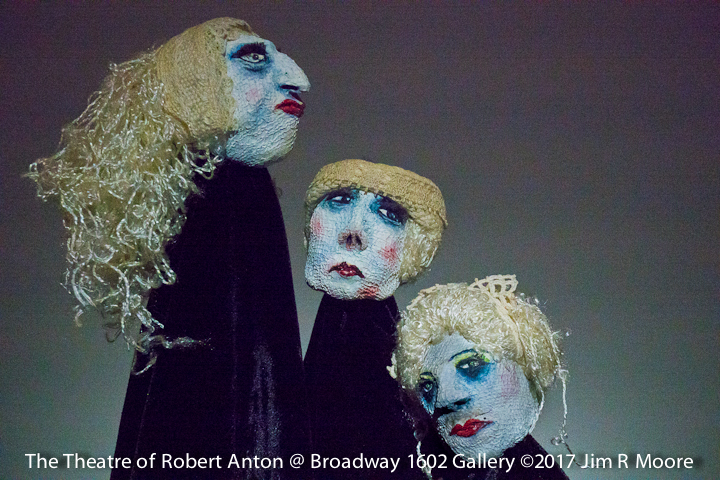 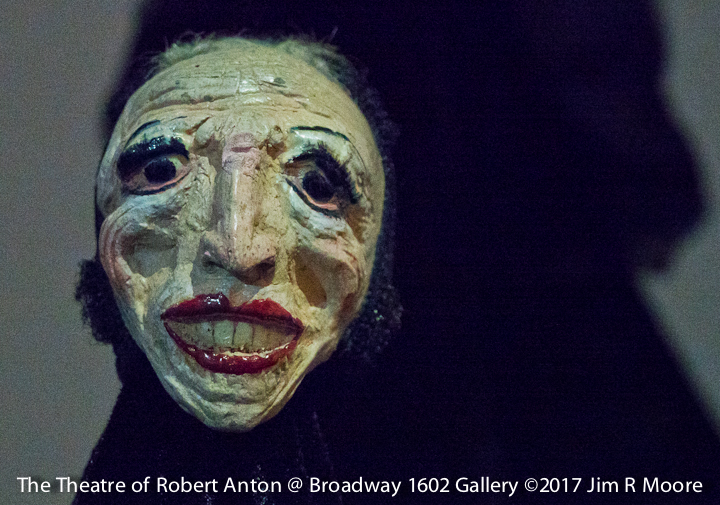 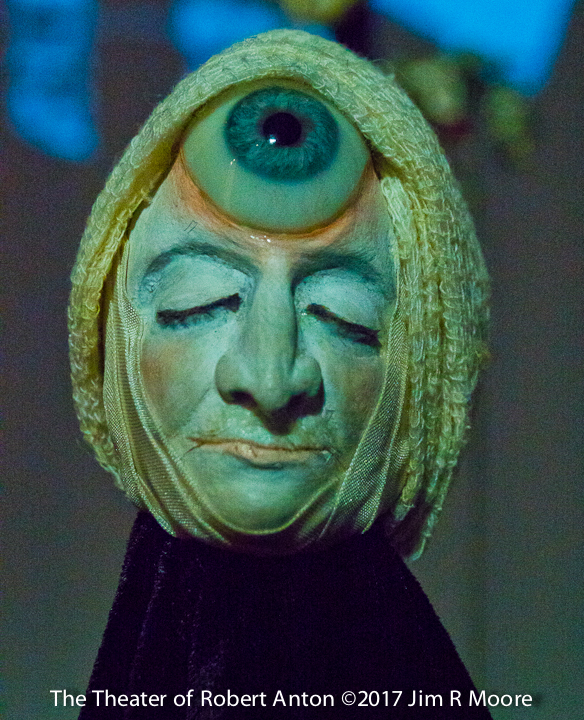 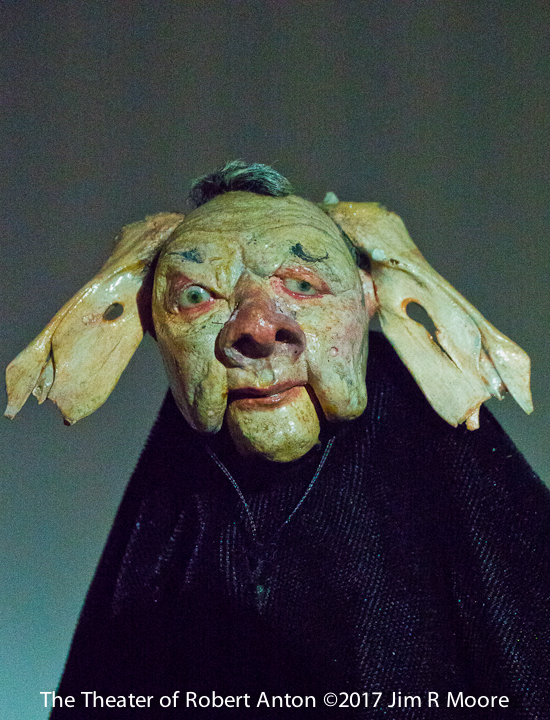 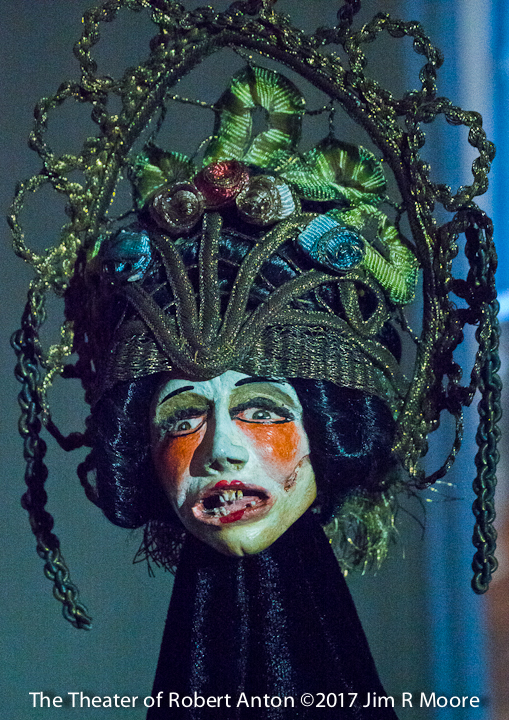 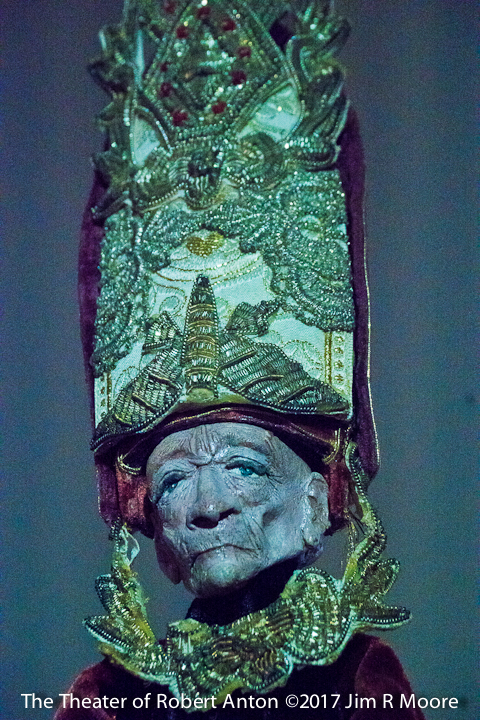 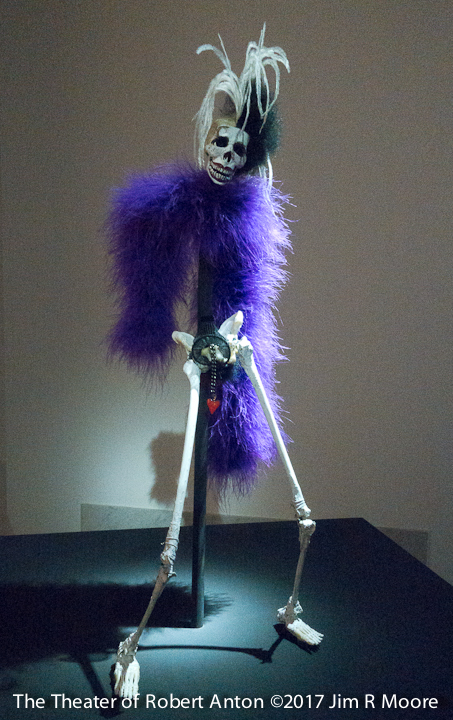 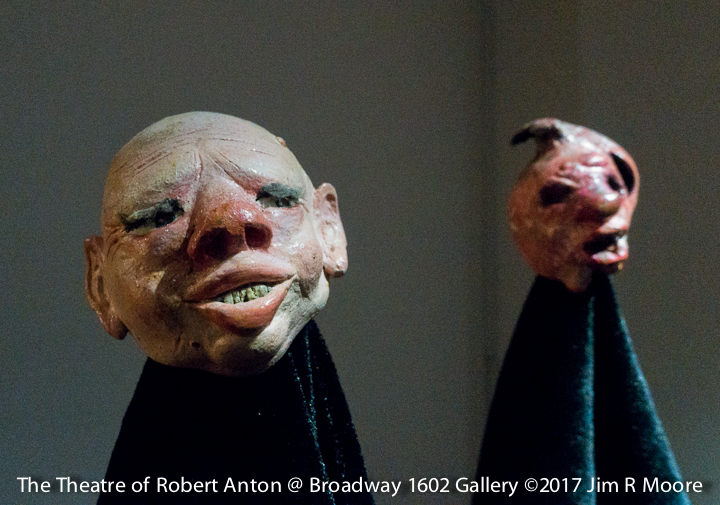 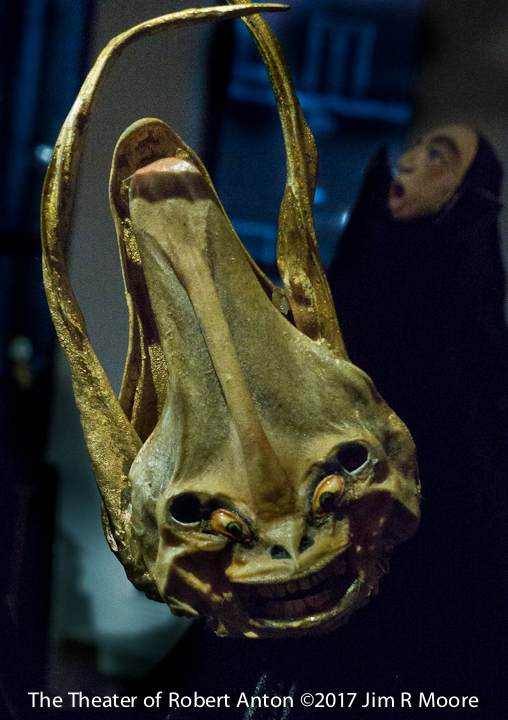 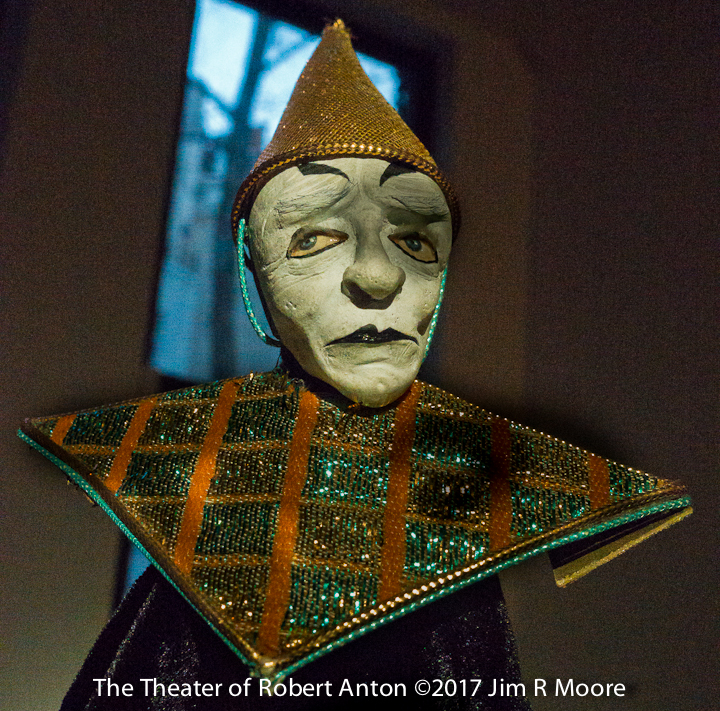 Off all the puppet actors I photographed this one reminded me of how ‘real’ the characters in his plays were when he animated them. Robert only allowed 15 people at a time to attend his performances and the images here are what the puppet actors would have looked like had you been one of those audience members as I was.  If you want to see more of the exhibit visit the Broadway 1602 Gallery website here.

Already from the tender age of nine, Anton followed an original childhood impulse to create en miniature: He re-built the stage sets of famous Broadway musicals he had seen with his parents in New York and London, reduced to a proscenium of 18” across and 12” high, and yet so breathtaking in detail and elegant precision that Anton was endorsed by journalists in his hometown Forth Worth in the mid 1960s as the “ingenuity of a Michelangelo”.

Anton arrived in New York in 1970, after two years of stage and costume design studies at Carnegie-Mellon University. He continued his studies in New York at the Studio and Forum of Stage Design.  In 1973, collaborating with the composer Elizabeth Swados, Anton designed the scenery for the Broadway musical “Elizabeth I” — his drawings for the queen’s costume survived. In the same year, his collaborations with Ellen Stewart’s La MaMa theatre began where he also staged his own plays. Repeat performances took place in his apartment on West 70th Street. Among the enthused audience and supporters were La MaMa Playwright and director Jean-Claude van Itallie, who was inspired by Anton’s ‘actors’ and started introducing puppets to his own plays, writer Susan Sontag and her son David Rieff, famed acting teacher Stella Adler, childhood friend and novelist Benjamin Taylor (Anton features as “the puppeteer” in his autobiographical debut novel “Tales out of School”, 1995), actress Linda Hunt who was soon to become a star in Robert Altman and David Lynch’s movies, theatre revolutionary Peter Brook, Broadway tap dancer, singer and choreographer Tommy Tune, Broadway’s director legend Hal Prince, the doyenne of the fashion world Diana Vreeland, Yoko Ono and John Lennon, to name a few.

Between 1974-75 Anton presented his puppet theatre at Robert Wilson’s Byrd Hoffmann Foundation and directed at the National Theater of the Deaf in Waterford, CT. His tour through Europe began, first performing at the Mickery Theater in Amsterdam. In 1975 Anton represented the United States at the International Theater Festival in Nancy, France, causing an avalanche of enthusiastic reviews in the French press depicting Anton’s miniature theatre as one of the most memorable and outstanding acts of the festival. The Nancy engagement introduced Anton to France’s flamboyant cultural minister Jacques Lang. In 1976, President Francois Mitterand and Jacques Lang designated the Château de Vincennes outside of Paris for Anton to set up his studio and living quarters and to perform for one year. Anton presented his plays and co-founded a visual/mime theatre program for the deaf-mute at the Chateau. In 1977 he created a new production for the Festival D’Automne in Paris.

Upon his return to New York in 1978, Anton moved to a large loft on 96 Spring Street and presented nightly performances of the “Paris Spectacle”. In 1981 Robert Anton was appointed as the American representative at the Theater der Welt Festival in Cologne. In the same year, he performed at the Teatro Argentina in Rome where he met Fellini again.

In the early 1980s, Anton’s experimentation took him to new stage designs, a move connecting him back to his childhood Broadway musical stages while the ‘actors’ fade into the background. Anton created glamorous miniature stage sets as “an homage to the 1940s” (Benjamin Taylor), sets like ‘Radio City Hall’ animated with grand and witty gestures to the tunes of Fred Astaire and Busby Berkeley. From there, Anton further radicalized his concepts. His last work was a play composed purely of light, exploring the psychological impact and metaphysical dimension of color, once more elaborately staged in a miniature proscenium: “A third final spectacle remained unfinished at this death. Totally unpopulated, it would have been an evocative constellation of set, sound, and light.” (Genii Grassi, “Robert Anton in Retrospect”, Theater Ex, 1986).

In an endeavor to bring back to a contemporary audience — and to the many of his generation who were not part of the blessed and illustrious able to see his performances — the experience of Robert Anton’s theatre, we interviewed on film, and continue to do so, witnesses of his plays and his life, friends and peers who were close to Anton’s universe. These dedicated and moving testimonies are an integral part of the exhibition and will constitute the core of a future documentary on The Theatre of Robert Anton.

We would like to express our gratitude to Bette Stoler who brought The Theatre of Robert Anton to us and who shared her memories of her friend and his context with us to help to realize the project. We also would like to thank Anton’s friends and peers who so generously shared their memories with us in the filmed interviews giving such rich testimony to Anton’s history.

Ward Hall reflects on "The Greatest Show on Earth"