For schedule and tickets go here! 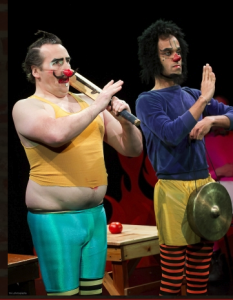 See a free preview of upcoming festival shows and more! 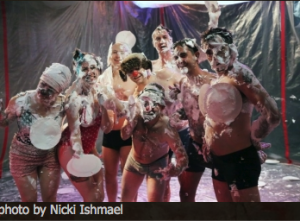 Join the pie fight! And remember: it is better to give than to receive! 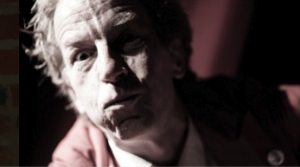 A free lecture by Jon Davison from London Clown School. 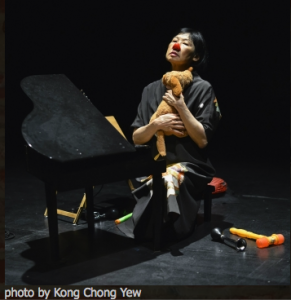 The NY Office of the Professions is Trying to Kill Me, created by Amanda Erin Miller, directed by Carol Lee Sirugo.

Angela Delfini Explains It All For You: A ¾-Woman Show 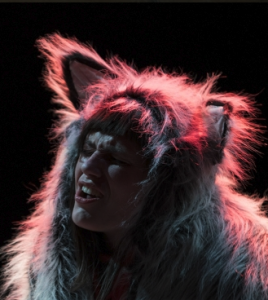 Straight from Barcelona, Toronto, and La Spezia, meet Italy’s greatest export, personality pioneer Dr. Angela Delfini, and her nervous but brave subject, Estrella. Join them on a clownesque five-step recovery program full of unique challenges and you-can’t-go-home-again transformations. Can the maniacally confident Delfini get the stuck-in-beta Estrella to dance and laugh her way to version 2.0 and beyond?? Probably, but not without your help! 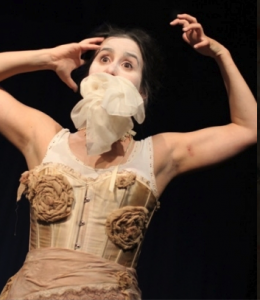 Written and performed by Lee Minora
Directed by Scott Sheppard

Lady Elizabeth Edwards has been making art in solitude. You are the first people she’s seen in a decade- and you are a complete disappointment! This is CHEEKS: a brutal clown show that melds contemporary stand-up bouffon clown and hands-on audience play. Laugh through your fear while this one-woman beast sucks the marrow from your funny bone all while taking on the tropes of our most revered female artists. No one is safe in this weapons-grade comedy, where everything is up for grabs – except her p*ssy. CHEEKS is Jane Austen with a handgun. 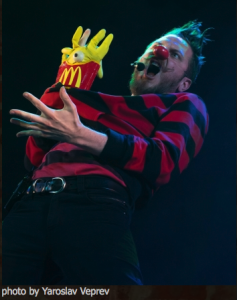 ‘Is dead’ (in Polish: “Nie zyje”) dives boldly headfirst into the topic of death, from overprotective mothers to modern work-a-day life, to the true hazards of smoking, touching on situations everyone can relate to but few dare to speak of.

Winner of the grand prize and audience choice award at the 27th edition of PAKA and the 32nd edition of Lidzbark Evening of Humor and Satire, and the 5th edition of SZPAK comedy festival, ‘Is Dead’ will make its premiere in the United States at the New York Clown Theater Festival.

Anka Wojtkowiak-Williams is a trained pantomime actress, clown, and performer. She began her career with Teatr Formy, performing in Poland and abroad. She is also a member of IMPROKRACJA, one of the premier improv groups in Poland. When she is not performing on stage, Anka is Artistic Director and works as a professional Medical Clown as part of Czerwone Noski – Klown w Szpitalu (Polish branch of Red Noses International).

Jim Williams is a professional performer, actor, writer, clown, mime, and stand-up comedian. He began performing internationally when he was 21 and has worked with such groups as KAPOOT (Chicago, IL, USA), Chicago Clown Care Unit of the Big Apple Circus, and Interkunst (Berlin, Germany). As a stand-up comedian, Jim performs across Poland and Europe both in English and in Polish. He is also the national trainer and works as a professional Medical Clown as part of Czerwone Noski – Klown w Szpitalu.

Jeff and Buttons Entertain an Audience 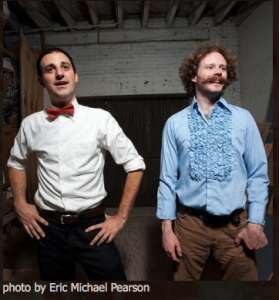 Created and performed by Jeff Seal and Chris Manley.

Jeff and Buttons will entertain their audience by performing their new show entitled J“eff and Buttons Entertain An Audience. ” Their show consists of lots of new but also some old material which will be performed for an audience with the express purpose of entertaining said audience. It should be an entertaining night of performing!

“Jeff and Buttons had me laughing so hard that I was literally wheezing.” – The Happiest Medium

“Their material is so stupid it becomes profound and refreshing” – MaskedArts.com

Look at What We Found 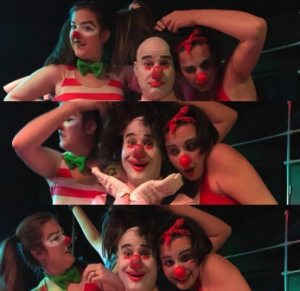 Look At What We Found is a theatrical improvised clown performance that invites the audience into a world where they can let go of their rigid adult lives, surrender to play, and find the joy and magic they left behind as children. The clowns begin with the stage and theater as their blank canvas, and with one brush stroke of stupidity at a time they build a tapestry of games, play, interaction and fun. Together, clowns and audience will Look At What We Found! 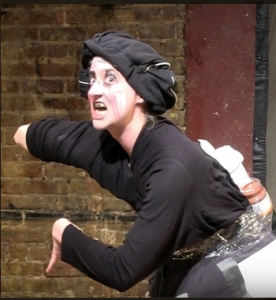 This is a performance in which the clown, named Melon Head, does indeed have a melon on her head. She tries to get it off in hilariously bizarre ways, eventually succeeding with a prat-fall. Later, she encounters 2 other fruits and uses these items in unusual and silly ways, ultimately exemplifying the joy of play, the fun of fruits and veggies, and that love is really awesome.

The Mysterious Magical Brandishers of Magic! 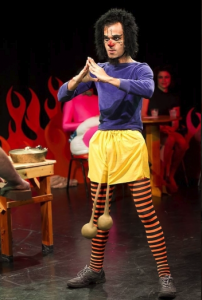 The Mysterious Magical Brandishers of Magic! is a Daredevil Style Freak Show performed by a hilariously mystical, intercontinental and intergalactic clown trio. This dangerously funny clown show is packed with mysteriously hilarious physical comedy that uses the ancient art of sorcery as means to tickle your funny bones. A magical world in which the spectacular successes and epic failure’s serve only one purpose – Laughter and Entertainment of the audience. The show involves amusingly bemusing mass hypnosis and precariously hilarious audience participation in acts such as The Board of Doom, The Bed of Nail and The Balls of Steel!

A Terrible Show for Terrible People 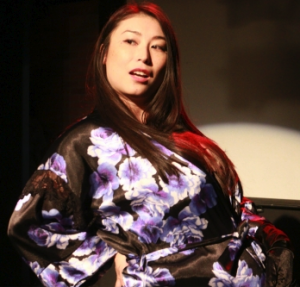 Created & performed by Bonnie He.

A Terrible Show for Terrible People is a raunchy and rambunctious solo clown performance that is both boner- and vomit-inducing.

In her East Coast premiere at the NY Clown Theatre Festival, physical comedian Bonnie He takes the audience on a flirtatious journey from death to rebirth, opening a voyeuristic window into personal tragedy, triumph, and titillation. Mostly titillation. TIT-illation.

The show is nonverbal but fiercely interactive. The audience is complicit, and that’s what makes A Terrible Show so riveting: you’re not just watching a show – you’re participating in the destruction of common decency. 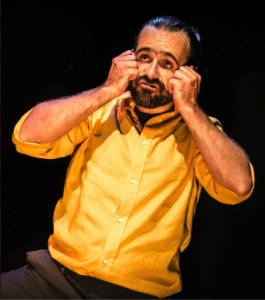 Through sheer spectacle and audience participation, TRAPPED unlocks a place where surreal worlds converge with nonsense, where irreverent moments lead to transcendent beauty.

“Inda Pereda made me giggle, snort, guffaw and squirm around in my seat. What a fun show. Go!” RED BASTARD 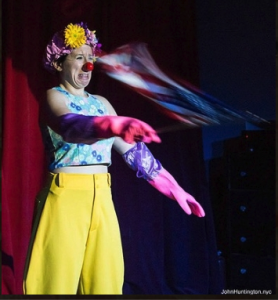 When the country feels like it’s going to shit, politicians are corrupt out of their butts and everything on our newsfeed makes us feel nauseous and/or constipated, it’s time we turn to poets like Penelope for answers. Penelope is a naive, vibrant, affable, surprisingly aggressive, toe-tapping clown who is in intense love and extremely angry at her country. She’s over the ol’ U.S. of A and its veiled promises and pledges. In a surprisingly loving patriotic foray, Penelope delivers an imaginative, universal spectacle about levity through anger, forgiveness through pain, pride through shame, connection through fear that straight-up defibrillates our human hearts. 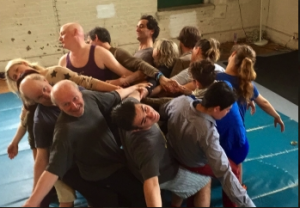 For all those who want to make their comedy more physical or their physicality funnier, a crash course in physical comedy vocabulary and its application for clowns, actors, mimes, dancers, and circus & variety artists. You will be introduced to a wide variety of slapstick skills centered around your own physicality, playing with partners, and reimagining the world of objects, as chairs, tables, hats, coats, plates, and doors take on new life in your comedic hands. We’ll combine these techniques with character, gag structure, and story to create new comedy material. Rare archival video footage will be screened, and resources for further exploration of physical comedy will be provided. Some performance experience and a reasonably sound body highly recommended, but all ages, body types, and levels of experience welcome.

JOHN TOWSEN is the founder and director of the New York City Physical Comedy Lab and was a founder and artistic director of the first NY Clown-Theatre Festival. He is widely recognized as an author, director, producer, performer, and teacher in clown, physical comedy, and allied arts. He has toured shows nationally and internationally and has taught full-length courses at Princeton, Juilliard, and NYU, and workshops in over a dozen countries. His 1976 book, Clowns: A Panoramic History, is still considered to be the standard work on the subject, and his blog All Fall Down: The Art & Craft of Physical Comedy (physicalcomedy.blogspot.com), is widely read by practitioners in the field. 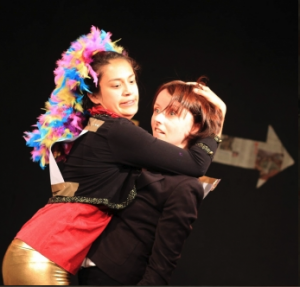 JON DAVISON has been a clown performer, teacher, director and writer for the last 30 years. He taught clown, improvisation and acting at the Institut del Teatre de Barcelona from 1996-2006 when he became a co-founder of the Escola de Clown de Barcelona.

From 2007-2010 he was an AHRC-funded Creative Fellow investigating contemporary clown/actor training at Central School of Speech and Drama, where he obtained his Ph.D. in Clown Performance Practice and is now Visiting Lecturer.

He has performed at festivals, theatres, tents, streets and bars throughout Europe, and is currently artistic director of the clown/circus/pantomime company Stupididity.

He has published two books, Clown: Readings in Theatre Practice (2013) and Clown Training – a practical guide (2015), both with Palgrave Macmillan. He runs the London Clown School, the only provider of regular clown workshops in the UK currently. 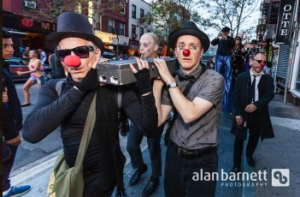 Mourn the passing of the clown festival. Bear it if you can. It died too young. Will any eulogy suffice?