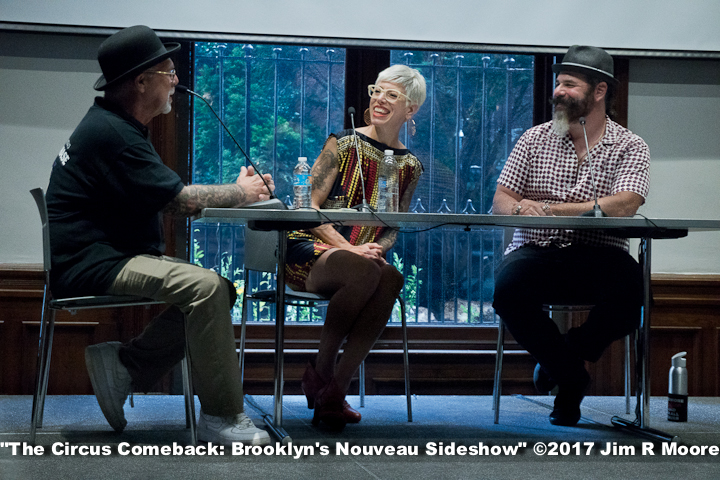 Topics for the discussion, moderated by Dick Zigun, included:

– The roots of the current sideshow revival, starting in the late ’80’s when Zigun brought his lifelong fascination with the form to an empty building on Coney Island’s boardwalk; expanding in the early ’90’s, when Jim Rose brought sideshow to a mass audience through Lalapalooza and underground nightlife performers like Combustible Kiva, Otter, and Bindlestiff’s Monseu and Keith Nelson brought sideshow skills into clubs; and surging with the growing participation in Coney Island cultural events like the Mermaid Parade and Burlesque At The Beach.

– Brooklyn’s long, long history with Sideshow and Circus and it’s current status as incubator for the next generations with organizations and training spaces (a majority are woman-run)  like Bindlestiff Family Cirkus, Circus Amok, LAVA, Big Sky Works, House of Yes, The Muse, Hybrid Movement Theater, STREB and many others.

– What’s next? Finding the next levels of thrill and danger, are sideshow artists on America’s Got Talent pushing the envelope too hard? 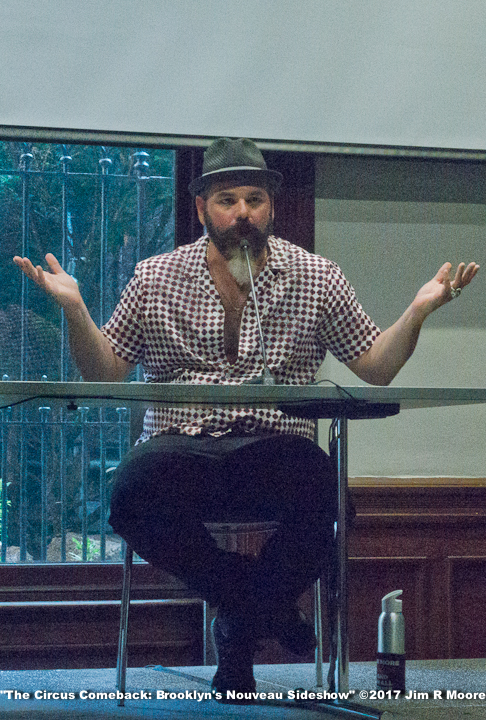 – What impact does Ringling’s closing have on a circus in America? The good news is that there a many, many high-quality shows touring right now:  America’s first Black-owned show,  Universal Circus is constantly wowing crowds all over the East Coast with a spectacular, world-class show; Circus Vargas  on the West Coast and Circus Vazquez on the East Coast represent the strong Mexican circus tradition with beautiful tented shows; Circus SMirkus from VT presents the heights of youth circus under canvas The Big Apple Circus will present an all-new season at Lincoln Center this year, directed by NYC’s Mark Lonergan (Parallel Exit), and small, independent tented shows like Flynn Creek Circus and Le Tigre are touring; and working in nontraditional venues, shows like Bindlestiff, Circus Amok, Circus Bella, Cirque Us, and dozens of others are thriving.

A brief demonstration of sword swallowing by Adam RealMan amazed the crowd, and Monseu performed bullwhip tricks, asking an audience member to hold targets for some precision whip cracking; next, audience members got the microphone and a question and answer period closed the event. 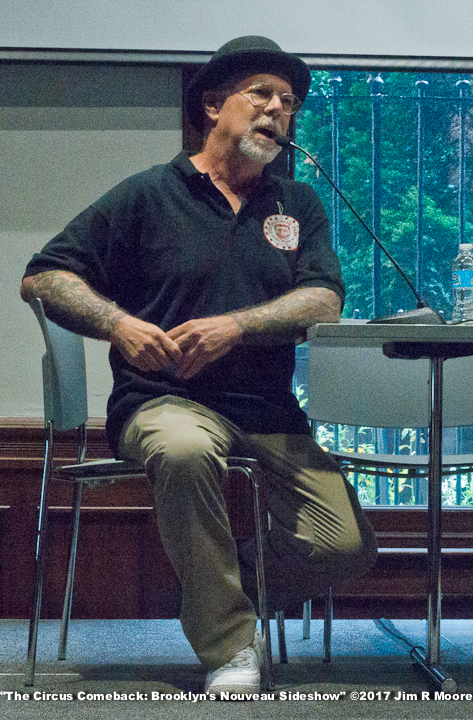 The takeaway? The circus is alive and well in America! And, invoking a traditional carny oath, Dick Zigun closed the evening: “You’re either with it, and for it, or you’re against it.”

Thanks to Stephanie Monseu for the text.