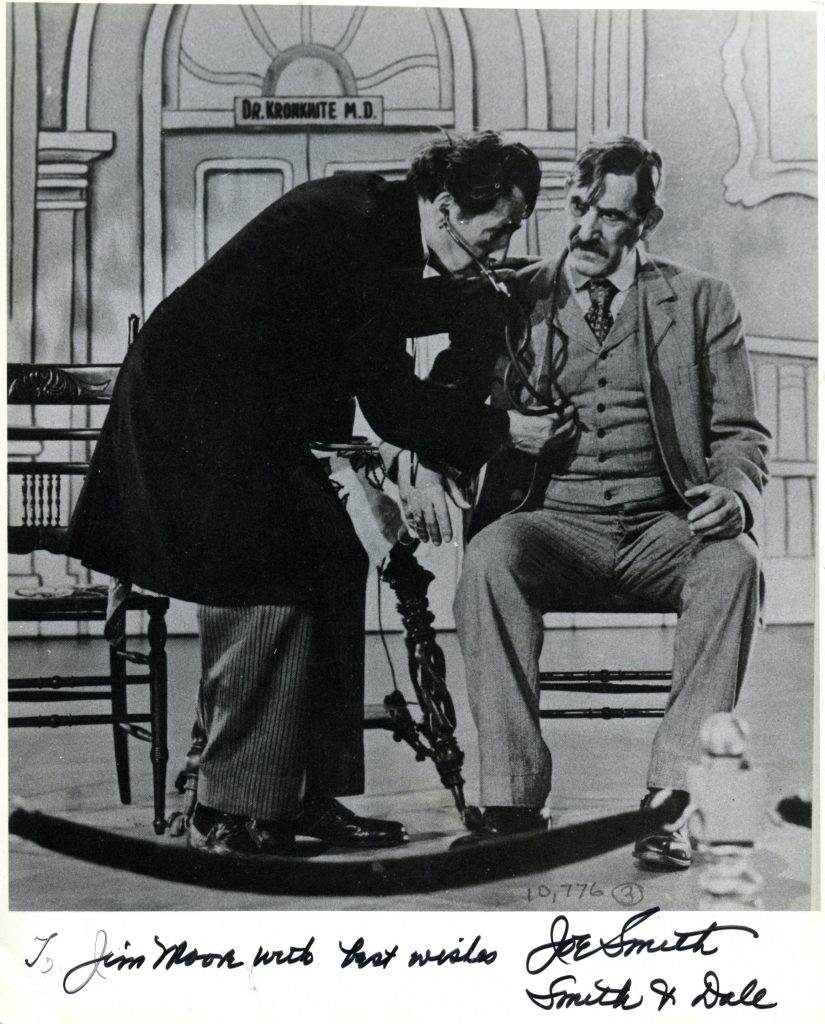 I attended the Conference every day but was especially interested in Vaudeville since I was a big fan of Joe Smith and his long-time partner Charles Dale  ‘born Charlie Marks’ (Sep 6, 1885 – Nov. 16, 1971) Joe Smith was the only remaining half of Smith & Dale still alive. Joe was 92 years old that day when he came out on stage and did an excerpt from the routine “Dr. Kronkheit”.

After the performance, I spoke to Joe Smith, and he invited me to lunch at his residence in New Jersey to talk about his days in Vaudeville. I drove out to the Actor’s Fund Home in Englewood, NJ the following week to have lunch with Joe.

I picked him up at home and, we went to a local diner. It was great to sit down and eat lunch with this wonderful, legendary comedian/vaudevillian. His stories were delightful and funny! His memories of working with the Marx Brothers and Sarah Bernhardt at the Palace were amazing in the detail and emotional context.

I invited him to attend an upcoming event I was producing. A Benefit to raise money for The New York Variety Arts Theater at Theater of the Open Eye.  It was to occupy a theater at 42nd St and 9th Ave. Phase 2 of the ’42nd St Redevelopment Project’. It had started and was now ready to begin renovating more buildings further West. Our New York Variety Theater was to be one of them.

The Benefit was great! Joe Smith became the ‘Honorary Chairman’ of the project and commented on ‘how wonderful it was to see Vaudeville still alive’ as he watched the show.

I visited him several more times and we had lunch and talked about Vaudeville. He died in Feb 1981.

Ron Hutchinson from “The Vitaphone Project” was interested in Smith & Dale and came across their appearance on The Ed Sullivan Show in 1953. I would like to Thank Ron for getting me this DVD of the show. Featured on this show was their famous “Dr. Kronkheit” routine.

Also posted here is the “Fireman Sketch” from the 1950’s TV show “Cavalcade of Stars”. They also performed on various television shows of the time, such as “Window on the World” and “Toast of the Town”.

Not a great copy of the routine here but it is all the was preserved! 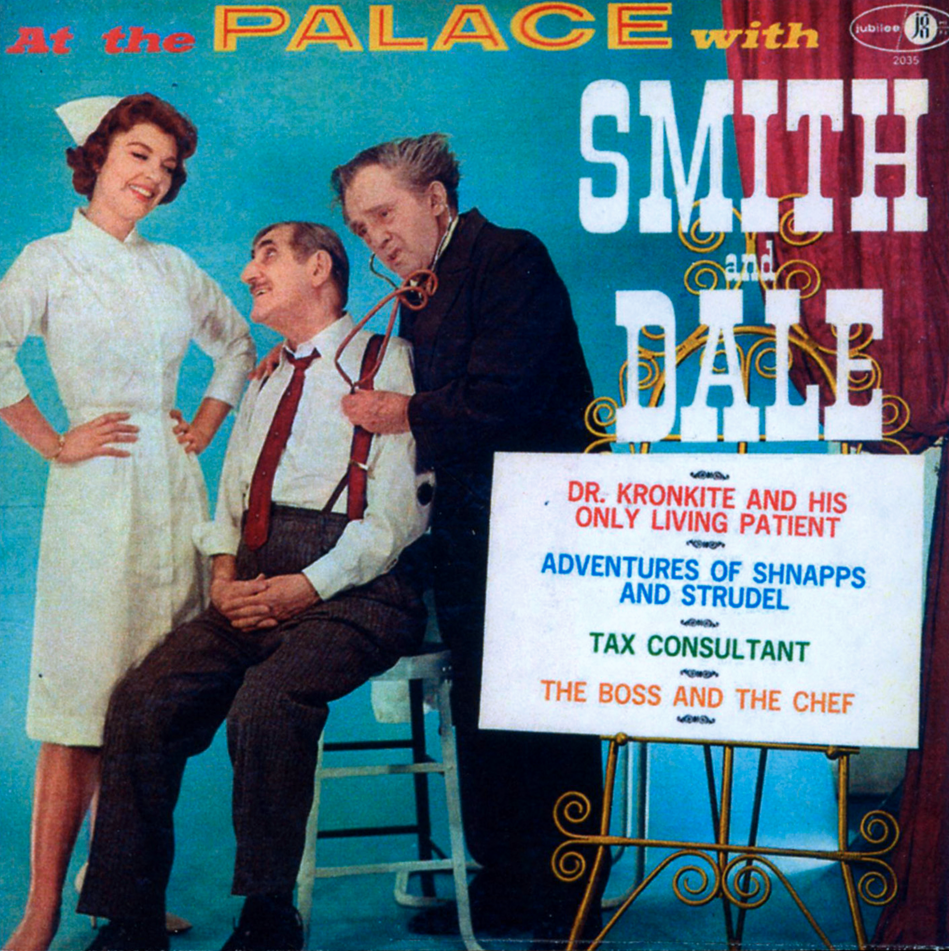 Smith & Dale vintage album cover with some of their routines.

Some background on the Comedy Duo

Smith and Dale were the archetypical vaudeville male two-act. When one thinks of a “vaudeville comedy team”, one thinks of something like Smith & Dale. Neil Simon based his play The Sunshine Boys on their act, although their offstage relationship wasn’t as dire as depicted—that part was based on Gallagher and Sheen.

Joe Smith and Charlie Dale grew up in the Jewish ghettos of New York City.  Sultzer and Marks met as teenagers in 1898 and formed a partnership. They named their act “Smith and Dale” because a local printer gave them a good deal on business cards reading “Smith and Dale” (intended for a vaudeville team that had dissolved). Joe Sultzer became Joe Smith, and Charlie Marks became Charlie Dale.
By 1902 they joined two singing comedians, Irving Kaufman and Harry Godwin in a team known as The Avon Comedy Four. The act became one of the most successful comedy turns in vaudeville. For over 15 years they were top-of-the-bill performers on Broadway.
Later, as Smith & Dale, the two used a heavy Jewish dialect, with Smith speaking in a deep, pessimistic voice and Dale in a high, wheedling tenor.
During the 1920s, they became famous for their signature sketch “Doctor Kronkheit and His Only Living Patient,” which like “Who’s on First?” for Abbott and Costello, became one of the famous comedy sketches of the 20th century. The name of the doctor is an inside joke: Smith and Dale, both being Jewish, named the physician Kronkheit, which is Yiddish (and also German) for sickness. Thus we have that very oddly named medical professional Dr. Sickness. Indeed a hospital in Germany is called aKrankenhaus, or literally a sick house.
Their act can be seen (to excellent advantage) in the feature film The Heart of New York (1932).
The partnership, known among entertainers as the longest in show-business history, endured until Charlie Marks’s death at age 89, on November 16, 1971. Sultzer continued to perform, mainly in guest appearances on television sitcoms, until his death on February 22, 1981, at the age of 97.

So close were Smith and Dale that they are buried in the same plot, with a common headstone. The gravestone notes the name of the three people buried there, Dale and his wife Mollie and the unmarried Smith. Smith is identified only by his show business name of Joe Smith, while his partner is listed as Charles Dale Marks and Dale’s wife is listed as Mollie Dale Marks. The larger printing higher on the stone says SMITH & DALE, to which Smith had added the words BOOKED SOLID. So even in death there is still seen their cleverness and humor.

Vaudevisual interview - "The Department of Fools"