Roc Roc-It makes carny gold out of everyday objects. Grinning like a roly-poly overgrown tattooed child, he ambles onstage declaring, “This is the most dangerous stunt ever!” Then he reaches into a black drawstring bag and pulls out an ordinary disposable latex glove.

Making a big hoopla over stretching the glove out, he finally manages to distend the cuff over the top half of his face. Then he proceeds to huff and puff, inflating the glove on his head until it resembles a bloated coxcomb or a balloon mohawk. The audience laughs at the ridiculous sight of a potbellied man wearing a blown up glove on his head, but as the glove gets larger and larger, the laughter turns to cringes and cries of protest. Roc-It jacks up the mounting anticipation with goofy pratfalls and sideshow banter until the glove finally bursts all over his face. 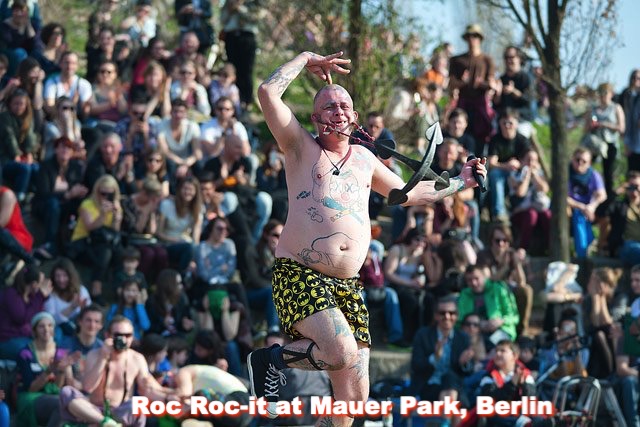 With ingeniously simple acts like these, Roc-It has earned the monicker Clown Prince of Berlin. He has indeed lived in Berlin for about ten years – in a caravan outside a squat in an industrial part of Kreuzberg – but Roc-It was actually born in a small town near the Black Forest. “I’m a country boy,” he says with a wide smile that reveals several missing teeth. After several failed apprenticeships, he finally found his calling on a trip to Barcelona. “I saw all these street performers working on the Rambla,” he recalled, “and I was like, yeah, wow, that’s what I want to do.”

Sleeping on the beach and practicing everyday, he built up skills in Diabolo and fire. He learned to hammer a nail up his nose and juggle balls. Then after five years performing throughout Europe, he found himself in New Orleans breaking up with an ex-girlfriend. “I had two weeks left on my visa,” he said, “and I thought, fuck it, I’m going to go and visit some friends in New York.” 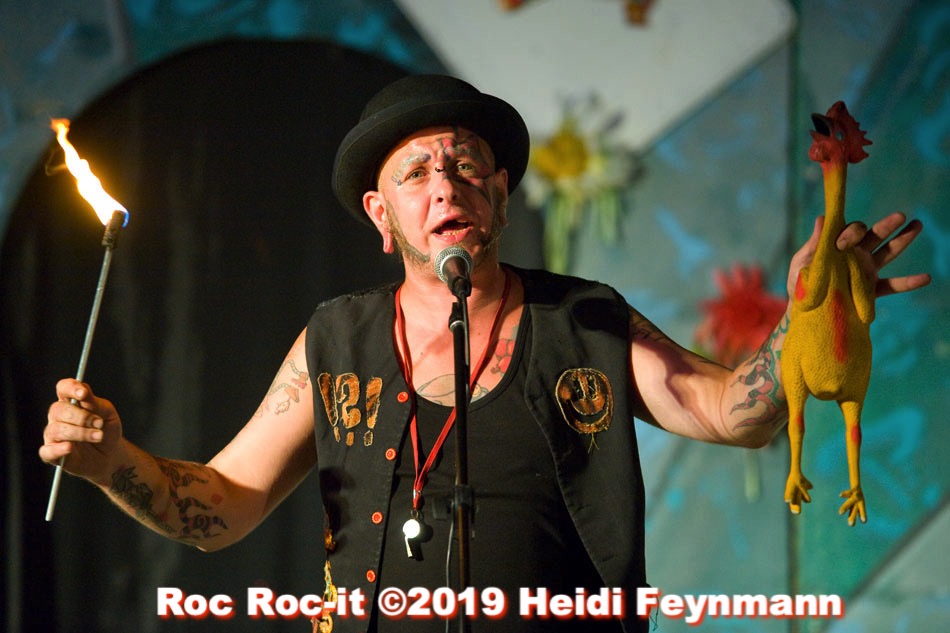 It was on his very last day in New York that he made a fateful visit to Coney Island with no other desire than to do a final show on the beach. “I knew nothing about what a sideshow is,” he said, “My friends were jugglers, guys riding a toy unicycle, doing all this classical stuff, and my show was always a bit weirder. And I was always a bit weirder character. So for me, it was basically, like, okay, there’s the main show and I’m the sideshow.”

With that in mind, he put his kit an old green suitcase and painted the words CIRCUS SIDESHOW on it. He was carrying the suitcase when he strolled past Coney Island Circus Sideshow and caught the attention of impresario Dick Zigun, who invited him to perform. Roc-It was a hit and stayed on for the next three years. “They fired the midget,” he laughs.

“While I was in New York, I did a thousand shows a year,” he estimates, but his visa had run out and living illegally finally wore him down. “I was working so much and so intensively, I got injured quite a lot,” he remembers, “I knocked my teeth out. I broke several ribs on stage. I burned my face off. And at one point, it just got to be like, it’s too much.”

Since returning to Europe six years ago, he continues to wow crowds in burlesque shows and street festivals. Twice a year, he performs with Kabaret Kalashnikov, a variety show with an Eastern European storyline. On summer nights, you can find him in the middle of a circle of people at Alexanderplatz during Berlin Lacht Fest. He also regularly performs with the Squidling Brothers Circus Sideshow when they are in Europe. 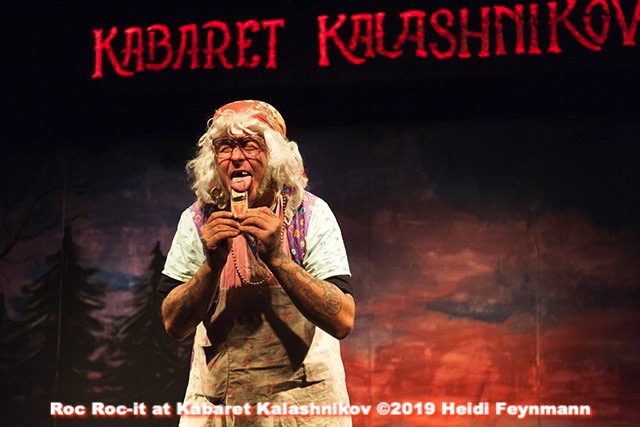 “Dazzle them with brilliance or baffle them with bullshit,” he declares, rolling up his sleeve to display a motto tattooed on his arm, “Either it has to be really poetic or just so ridiculous, that it’s just as good.”