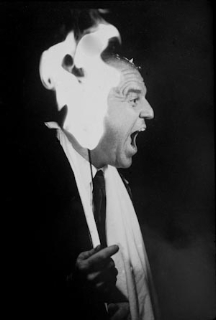 Leo Bassi’s New Neronian is an aggressive thesis on violence and control. At one point Bassi locked all the theater doors and threatened to burn down the theater. A very nervous audience played along with him – some to a larger degree than others. Bassi poured what smelled and looked like gasoline over the stage floor and about the set, than lit a flaming torch. He moved anxiously and intensely over the stage encouraging the audience to believe they were in imminent danger. He came out to the audience, threatened to burn one of the audience members, selected one and then backed off with an apology.

He apologized, not for intimidating the audience member, but for not burning his shirt, for the poor audience member would not – much later in his life – be able to pick up the burned shirt and show it to his grandson telling him about the time he had gone to a live performance and this crazy man Leo Bassi from Italy burned a hole in his shirt. It would be a lost moment for the audience member with his grandson. Maybe the audience member would have been part of a club of people from all over the world who had had their shirts burned by Bassi. In his golden years he would be elected president of the club. Bassi’s failure to burn his shirt took away this opportunity of prestige in old age. And so the evening went, in fiery forward lurching rhythm with Bassi challenging the audience’s perspective of truth, tolerance and totalitarianism[i]. Most in the audience were totally mesmerized by the Neo Fascist [Neo-Conservative] Nero look-alike character that demanded faith and fear and realized that Bassi was angry and fearful of the worldwide trend toward strong-arm governments. Others hated the show; some thinking Bassi was worshiping the Nero character for he did indeed walk the finest line between. But everyone loved watching Leo, shoulder in a cast, lie on his back, struggle to get a piano onto his feet and then juggle it for the feat that had placed him in the Guinness World Book of Records.