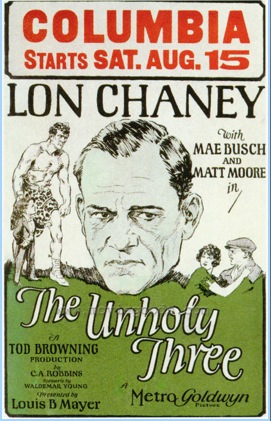 Original Poster for “The Unholy Three”

If you never seen a Lon Chaney/Tod Browning film…this is a good place to start.

Here is more information on this wonderful silent film classic from Tod Browning with Lon Chaney.

The film was remade in 1930 as a talkie. In both the 1925 and the 1930 version, the roles of Professor Echo and Tweedledee are played by Lon Chaney and Harry Earles respectively. Both were based on the novel of the same name by Clarence Aaron “Tod” Robbins.

Three sideshow performers leave the circus after Tweedledee the midget assaults a child at one of their shows and become “The Unholy Three.” Echo the ventriloquist assumes the role of Mrs. O’Grady, a kindly old grandmother, who runs a bird shop. Tweedledee, “The Twenty Inch Man,” becomes her grandchild, and Hercules (Victor McLaglen) is their assistant. Soon an incredible crime wave is launched from their little store.

Convincingly disguised as a little old lady, Echo and his two carnival cohorts perform a series of Park Avenue robberies. Echo’s sweetheart Rosie (Mae Busch) plays along with the Unholy Three but changes her mind when their latest burglary, which ended in murder, threatens to send an innocent man (who is also Rosie’s Lover) to the electric chair.

This will be the first in a series of “A QUIET NIGHT AT THE MOVIES”  that will happen once a month at Dixon Place. Hosted by Jim Moore and DP’s Katy Einerson.

Come and enjoy a nice quiet night out at the movies. (The films are not recommended for the squeamish) 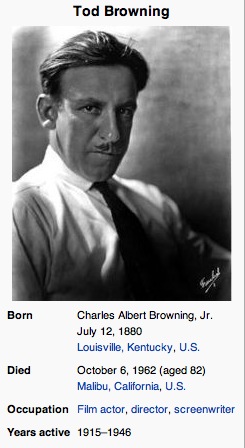