Celebrating the work of Yoshiko Chuma & The School of Hard Knocks

Moderator for the evening was Gayle Tufts.

A ‘free’, interactive, educational series exploring the history and development of Off-Off Broadway from its inception within the Village ‘coffeehouse theatres’ of the 1960’s through today. Part artist portrait, part history lesson, part community forum.

Here are a few photographs from the evening’s event. 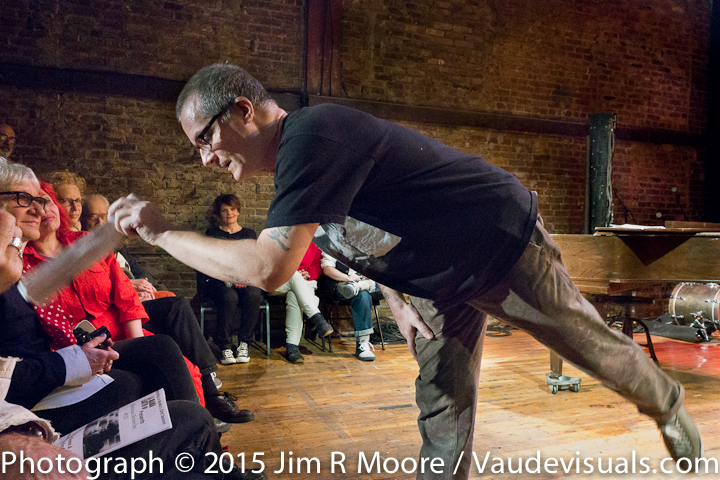 Brian Moran (one of the original members of School of Hard Knocks)performs a dance improv. 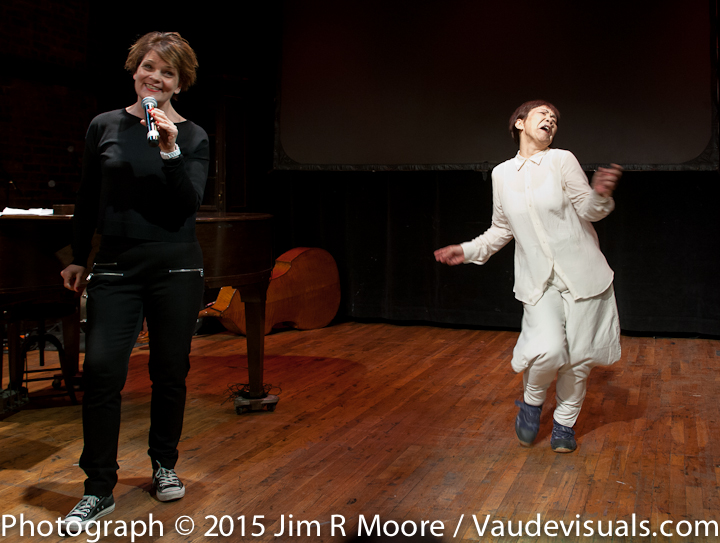 Moderator Gayle Tufts and Yoshiko do a little duo together. 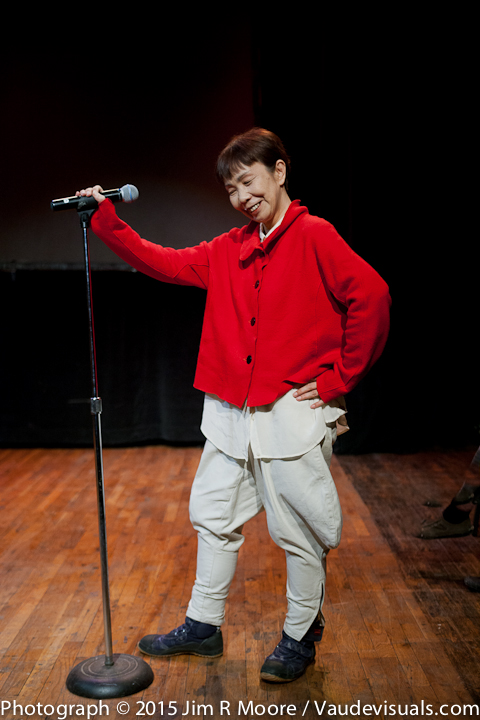 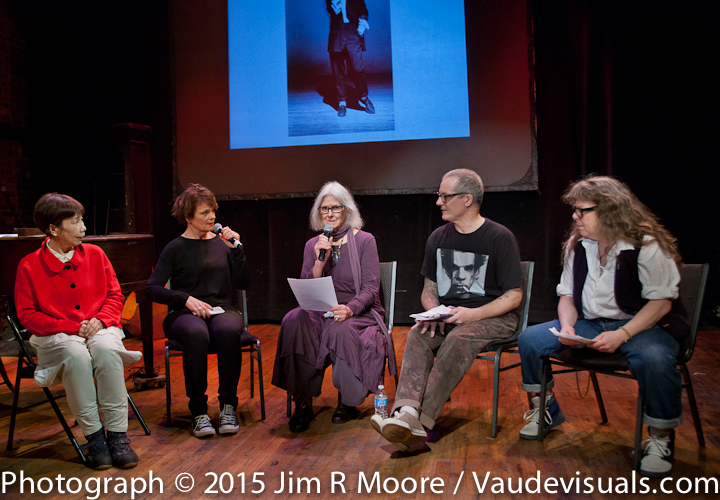 Deborah Jowitt talks about her experiences watching Yoshiko Chuma over the years. 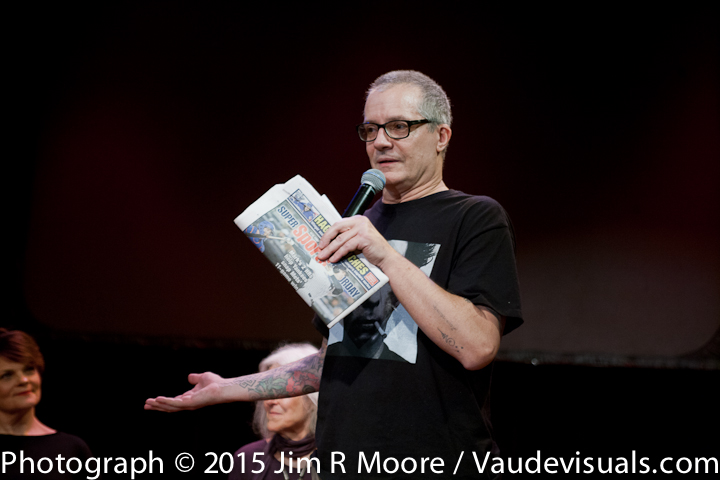 Brian Moran talks about his time performing with Yoshiko Chuma and The School of Hard Knocks. 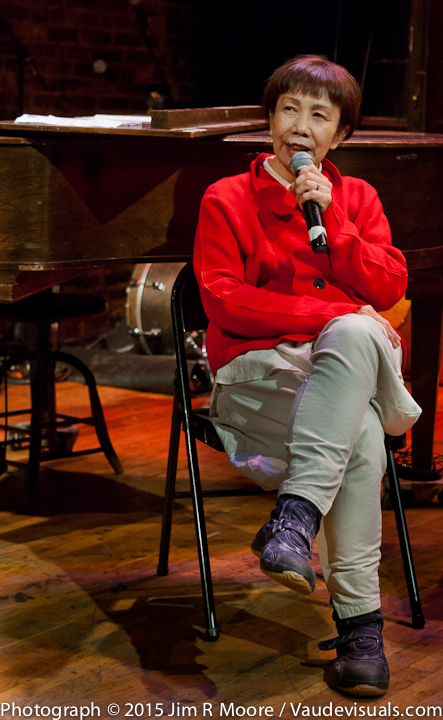 Yoshiko talks about her work with the company in the early days of it’s formation. 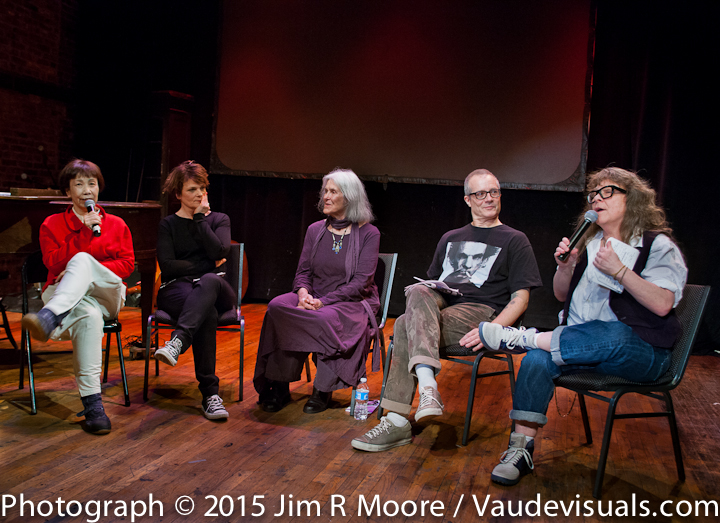 Lori E. Seid talks about her time working with the company as lighting designer and stage manager. 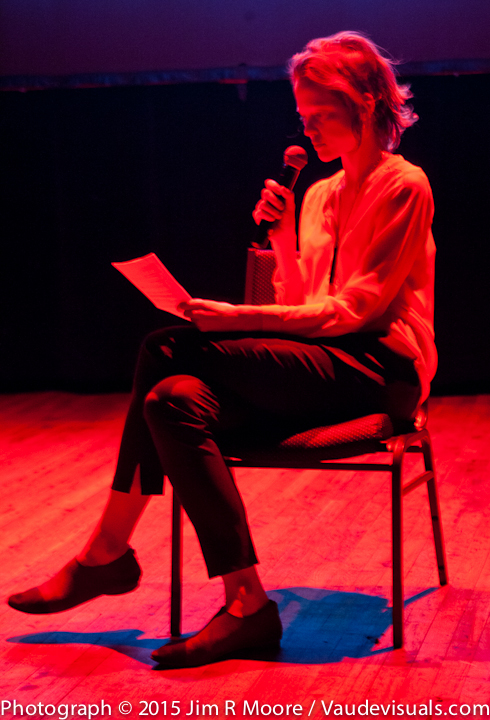 Ursula Eagly talks about her time with Yoshiko using a powerpoint presentation. 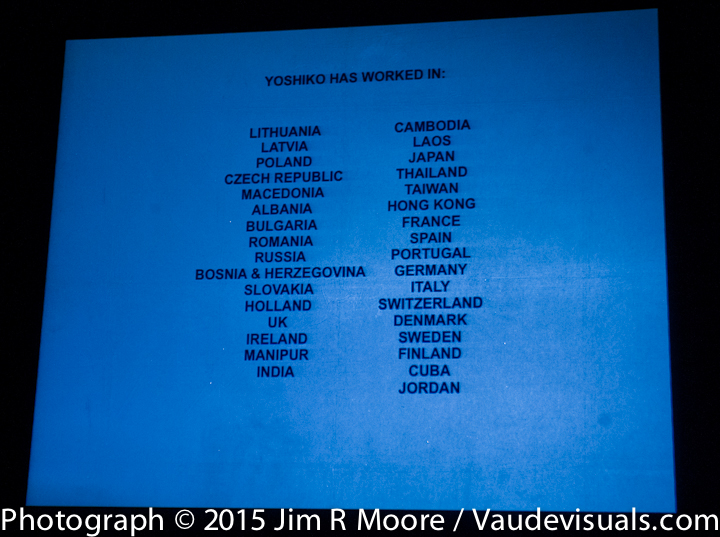 Ursula’s powerpoint was very informative as what countries Yoshiko had worked in and the people she worked with. 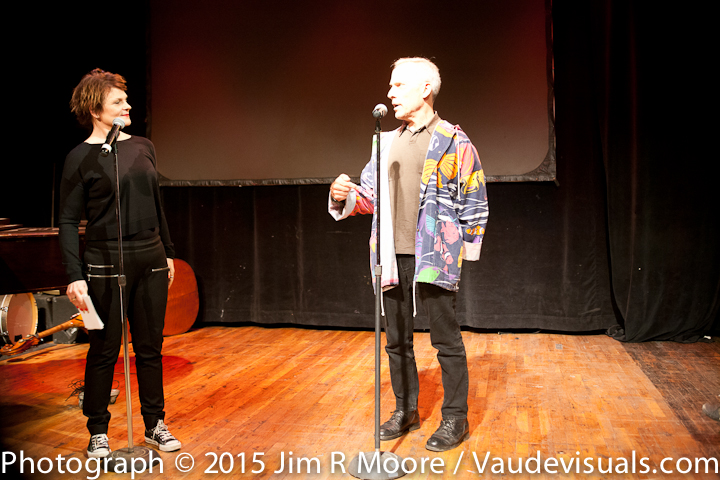 Gayle Tufts talks with photographer/painter Bob Flynt about his photographs of Yoshiko and the company. 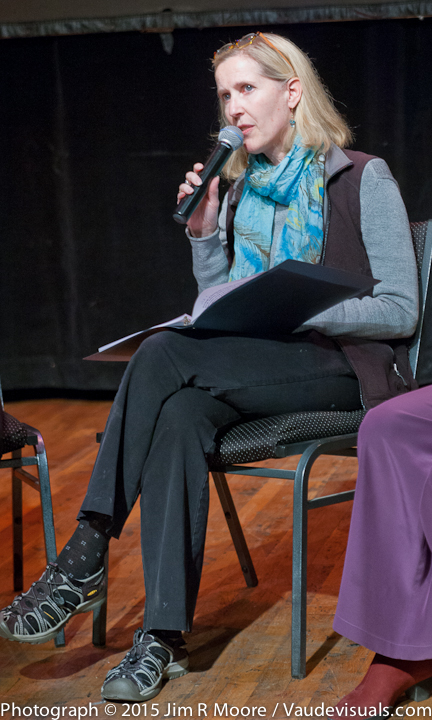 Allyson Green talks about Yoshiko’s work and it’s impact on her. 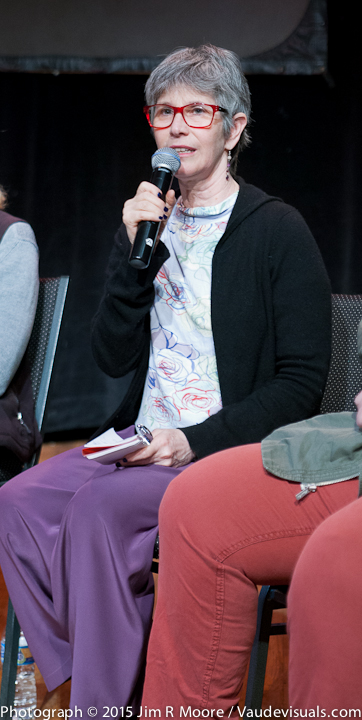 Elise Bernhardt talks about her inspiration from Yoshiko’s work. 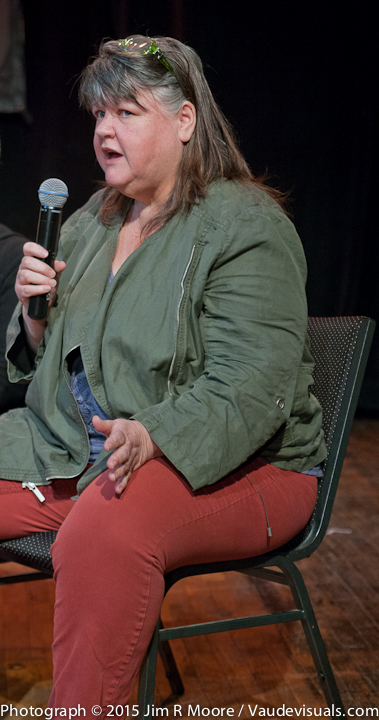 Gabriel Berry discusses her work making costumes for Yoshiko and the company. 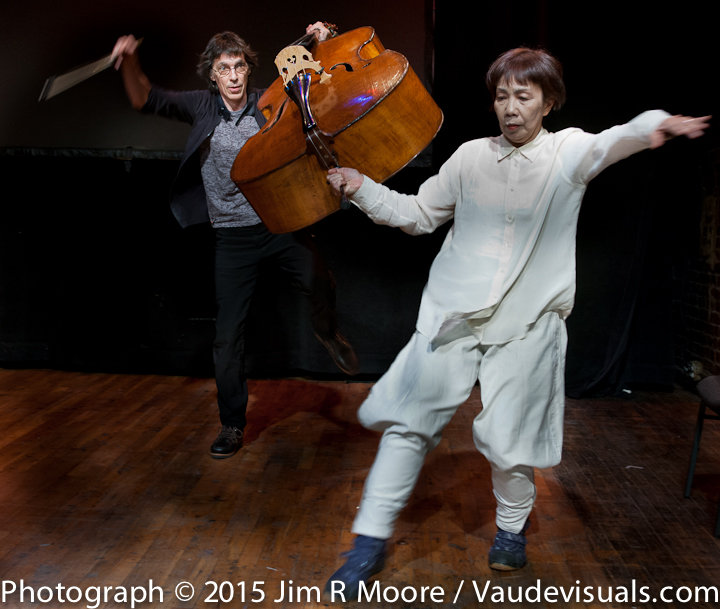 Yoshiko Chuma and Robert Black perform a duo with his bass. 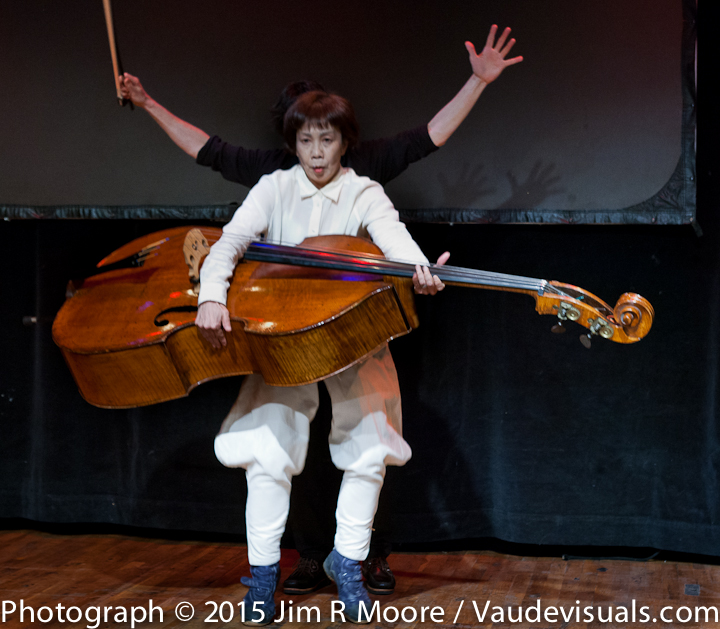 Robert Black behind Yoshiko in their duo. 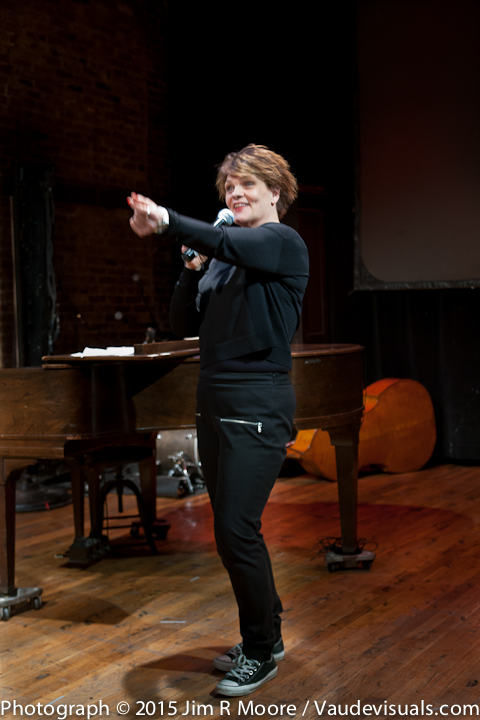 Gayle Tufts talks to the audience about her work performing in Germany/Austria.

During the evening their were photographs of Yoshiko Chuma’s early performance days by Dona Ann McAdams, a scene from a film by Jacob Burckhardt (It Don’t Pay to be an Honest Citizen)1984

Recollections and remembrances of working with Yoshiko Chuma & The School of Hard Knocks by Lori E. Seid.
Introduced by Gayle Tufts. Part of the LaMama Etc series.

An example of the dance work done by Yoshiko Chuma & School of Hard Knocks is demonstrated by dancer Megumi Eda in a short solo piece.

During the evening Yoshiko Chuma and Robert Black engaged in an improv with nothing but his bass and bow and Yoshiko's dancing.
Nicky Paraiso sings and Dane Terry and Nicky do a piano relay.

One of the talents Gayle Tufts has is singing. Here she sings a song she wrote.
Accompanied by Nicky Paraiso on the piano and Robert Black on Bass.