If anyone knows about the circus it is Karen E. Gersch. She has performed, created and directed circus and painted, drawn and illustrated it. Her work is beautiful and captures the whimsical nature of the circus soul. Here are a few choice examples of Karen’s work with her descriptive text. 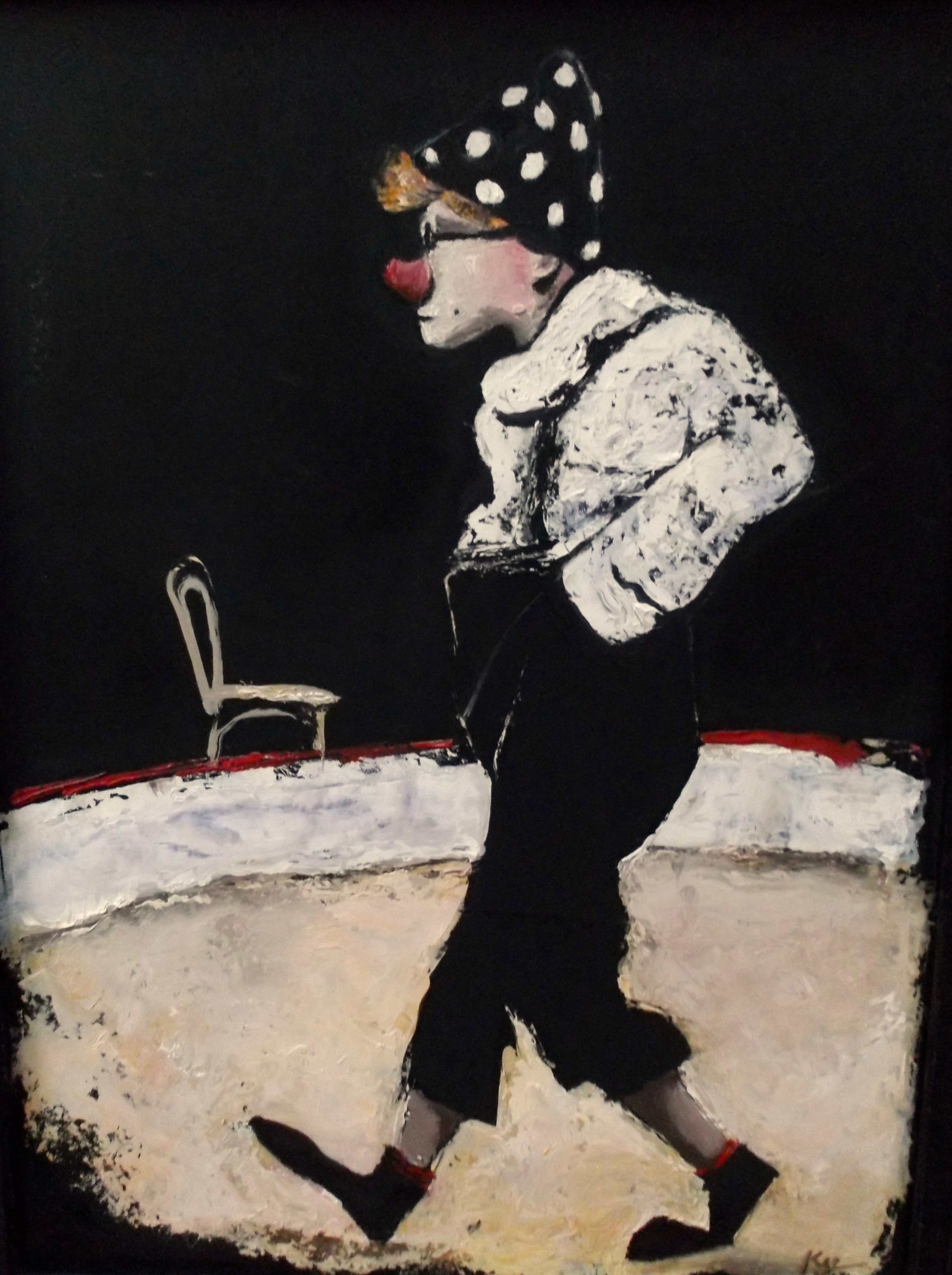 The ‘Nickel’ in this oil painting, “Nickel Storms the Ring” was my teacher and mentor, Nina Krasavina, a star acrobat, aerialist ad the first woman clown ever to grace the ring of the Moscow Circus. After defecting to NYC in the mid-’70s with her husband, Gregory Fedin, they traveled with 3-ring circuses throughout the US and Canada. Nina and Grefory opened their own school, the Circus Arts Center, in an abandoned department store in Hoboken, which they ran for years, training many acts that had longtime professional careers. 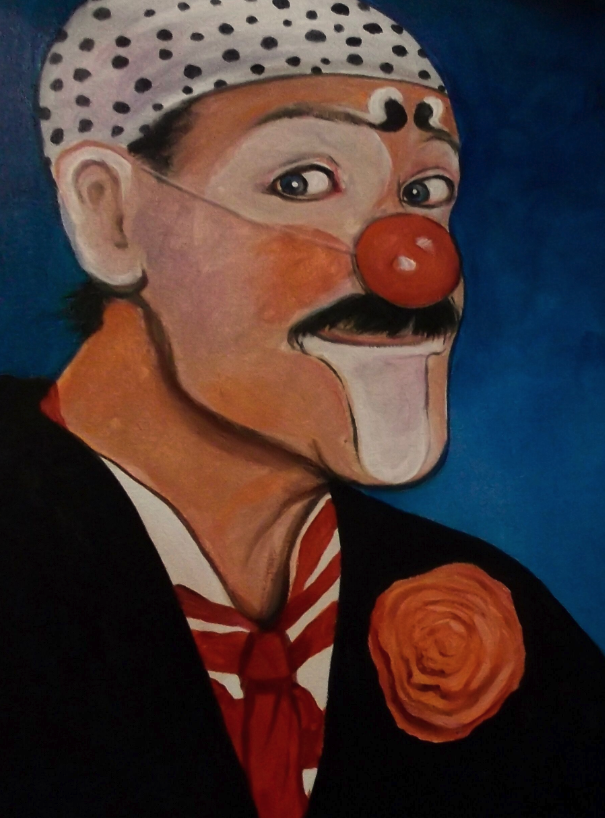 “Gordoon”: acrylic on canvas portrait of Jeff Gordon, whose inventive and acrobatic routines made him a beloved and longtime featured performer with the Big Apple Circus, as well as Cirque du Soleil, Ringling Bros., Walt Disney World, and various NYC theatre productions. 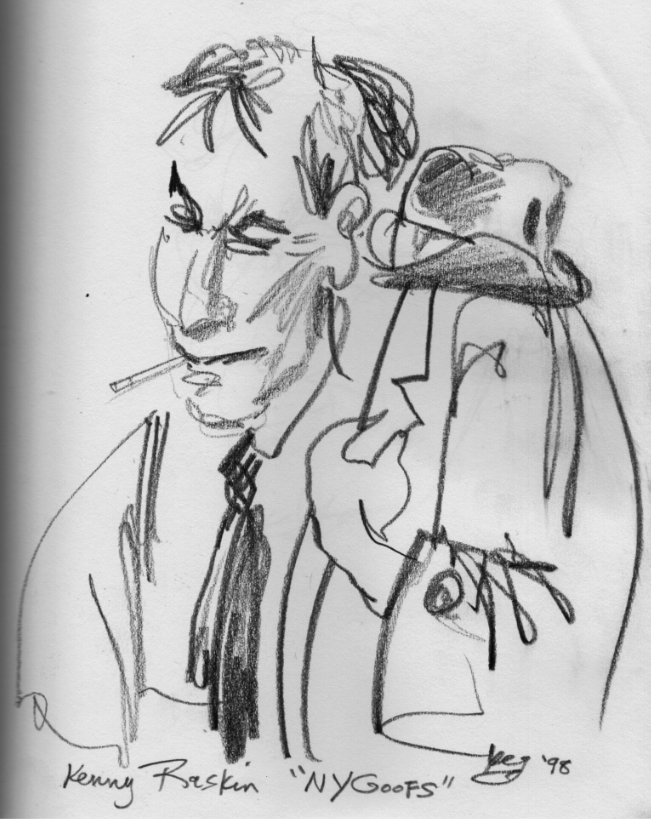 “Kenny Raskin/New York Goofs”. Kenny is a physical comedian whose diverse and charming character work enlightens every stage, be it on Broadway, off-off-Broadway or Cirque du Soleil. He is someone I never tire of sketching; captured here during a New York Goofs engagement. 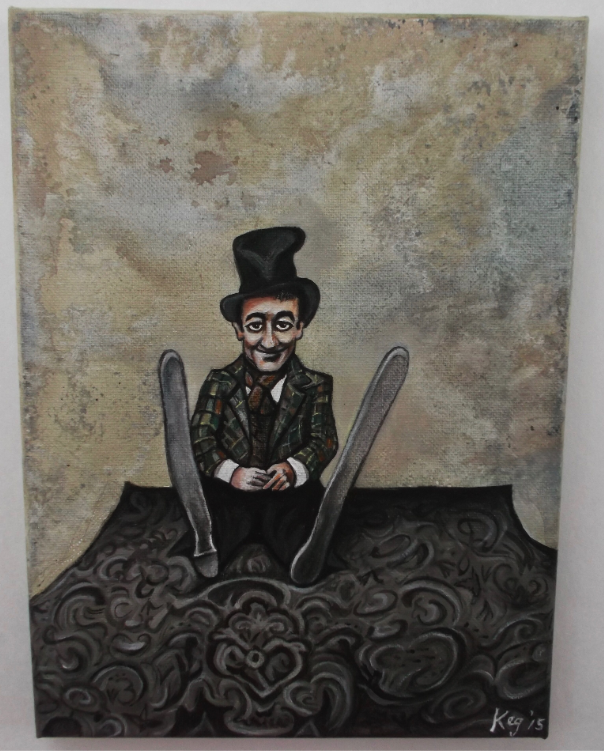 “Little Tich” and his Big Boots Dance was a headlining act of the English music halls in the early 1900s. Tich (Harry Relph) was only 4’6” tall, but left large footprints with his eccentric and energetic dance routines, combining balancing skills with acrobatics. The slender wooden boots he performed in were 28 inches long! Relph is considered the forerunner of all screen comedy. 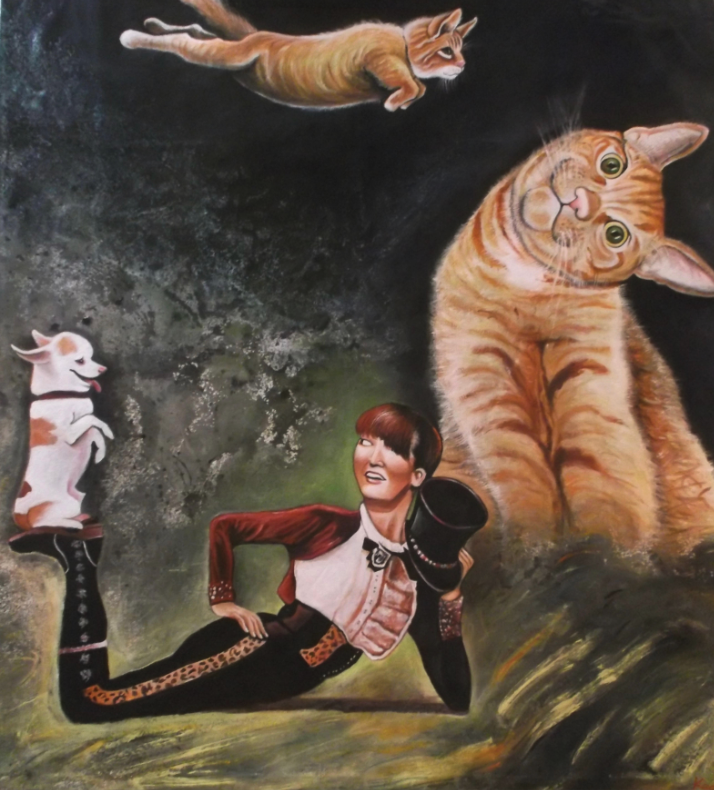 Darja is a Latvian-born acrobat whose professional partners happen to be small dogs and a potpourri of cats.  The setting for her act is a living room, complete with two dressers, a nightstand, and an oval carpet.  The drawers glide open and cats climb gracefully out, then jump in an arc to her shoulders, where they run and balance along with her extended limbs, as she turns walkovers, handstands, cartwheels, and splits.  A dog poses perfectly on her top hat while she executes back rolls and contortional poses.

Darja performs primarily in Russia and Europe, in circuses, cabarets, and theaters.  Her animals travel with her – in carriers to the stage, but live uncaged in her hotel room, where they all share her bed.  I know, because I had the room next door to her in Leipzig, Germany, and was serenaded by her Siamese and Egyptian cats, who sang gustily all night! 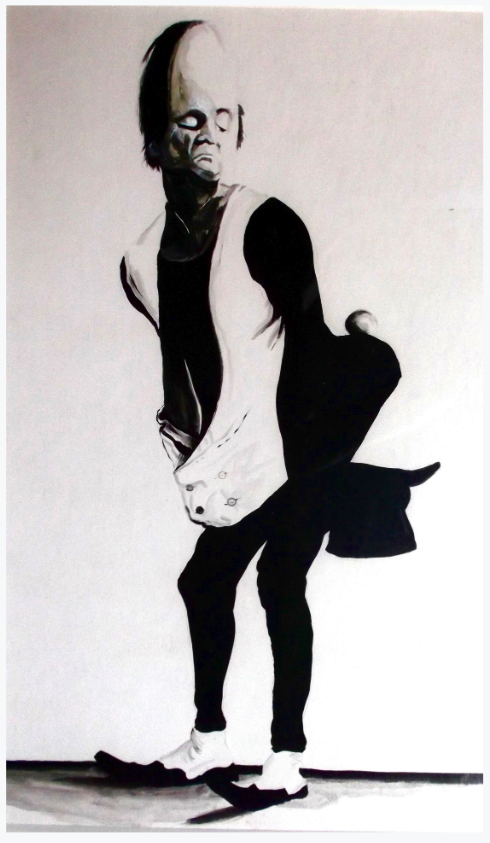 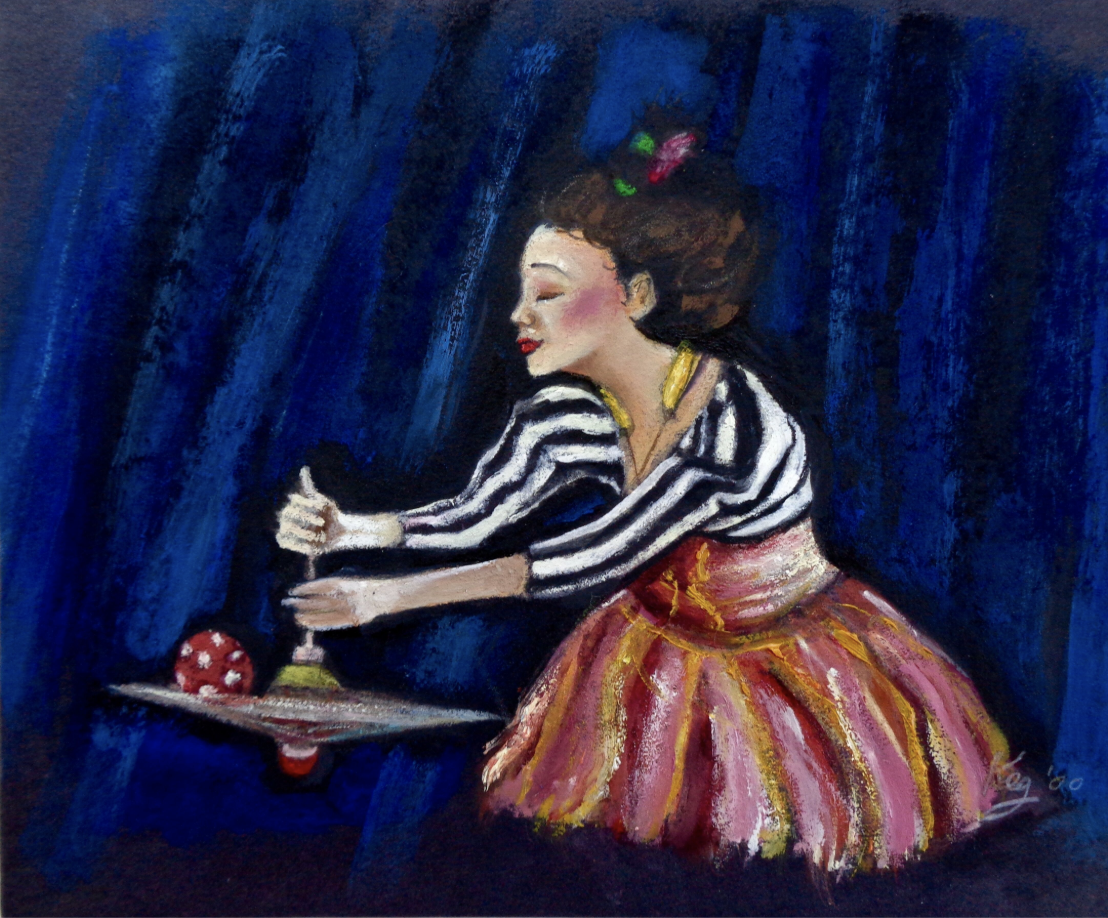 This is a very early pastel sketch of Hilary Chaplain (1990’s) from the CircuSundays Series I used to run.  Hilary is one of the most prolifically funny and hardest working physical comediennes, whose recent work has delved deeply into emotional and historical elements.  In particular, her current production “The Last Rat of Theresienstadt” which takes place in the “Ghetto town”/concentration camp of Theresienstadt during the Holocaust.  Following a successful run in Europe, where she garnered top awards, the show will be presented at The Wild Project on November 13th and 14th. 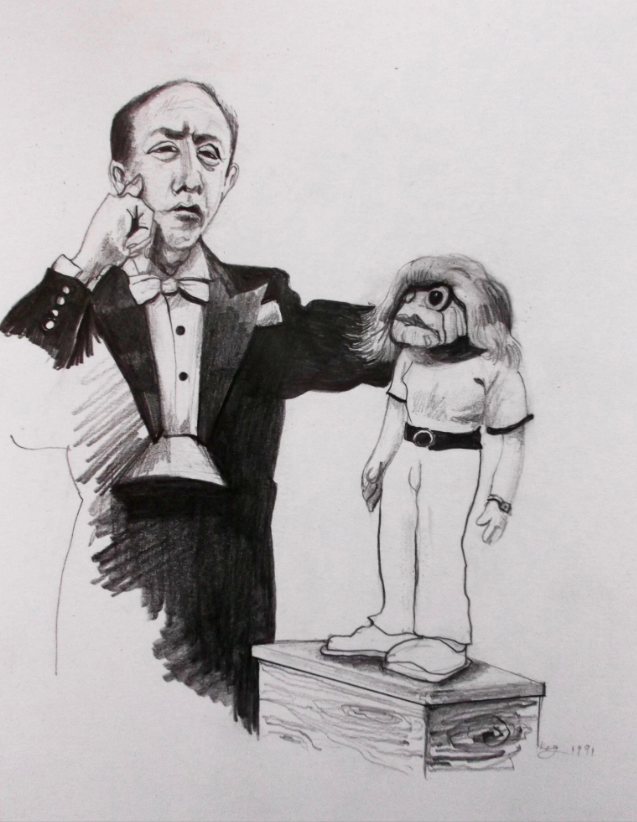 “Senor and Friend”. Senor Wences began his career as an unsuccessful bullfighter before becoming a gifted ventriloquist. The Spanish performer was one of the highest-paid and most popular Vaudevillian acts in the world and appeared on the Ed Sullivan show throughout the ’50s and ’60s. Wences died at the age of 103 in Manhattan. 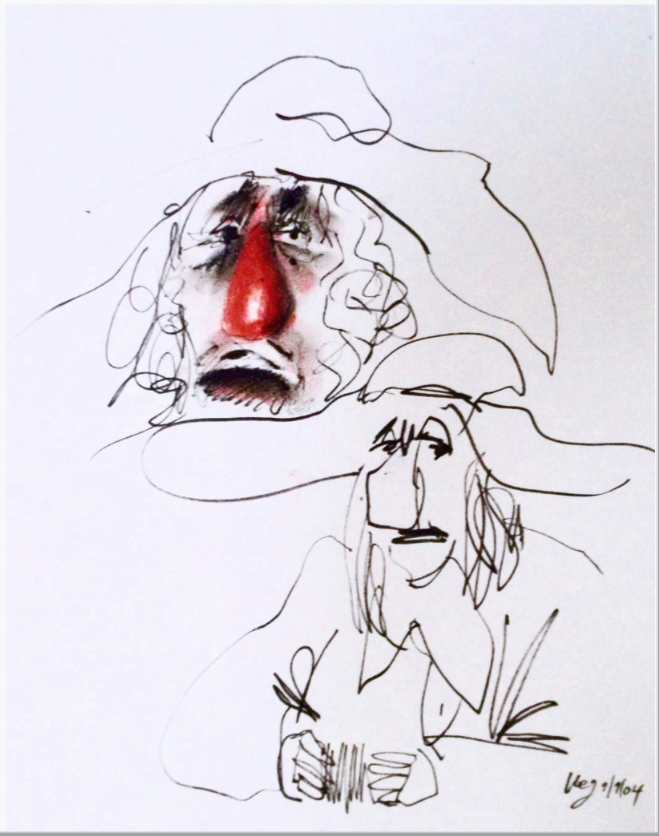 “Slava’s Snow Show”. I first saw Slava Polunin in Cirque du Soleil’s production of Alegria, back in the 80’s, and was delighted by his simplistic and organic clowning (finally oversized clown proboscis and makeup used well by the clowns who wore them!) His signature romantic imagery, the surreal environments and emotional physical work he creates were resurrected in his first “Snow Show” that appeared on Broadway. This drawing was one of many rendered from his second run in NYC at Union Square. 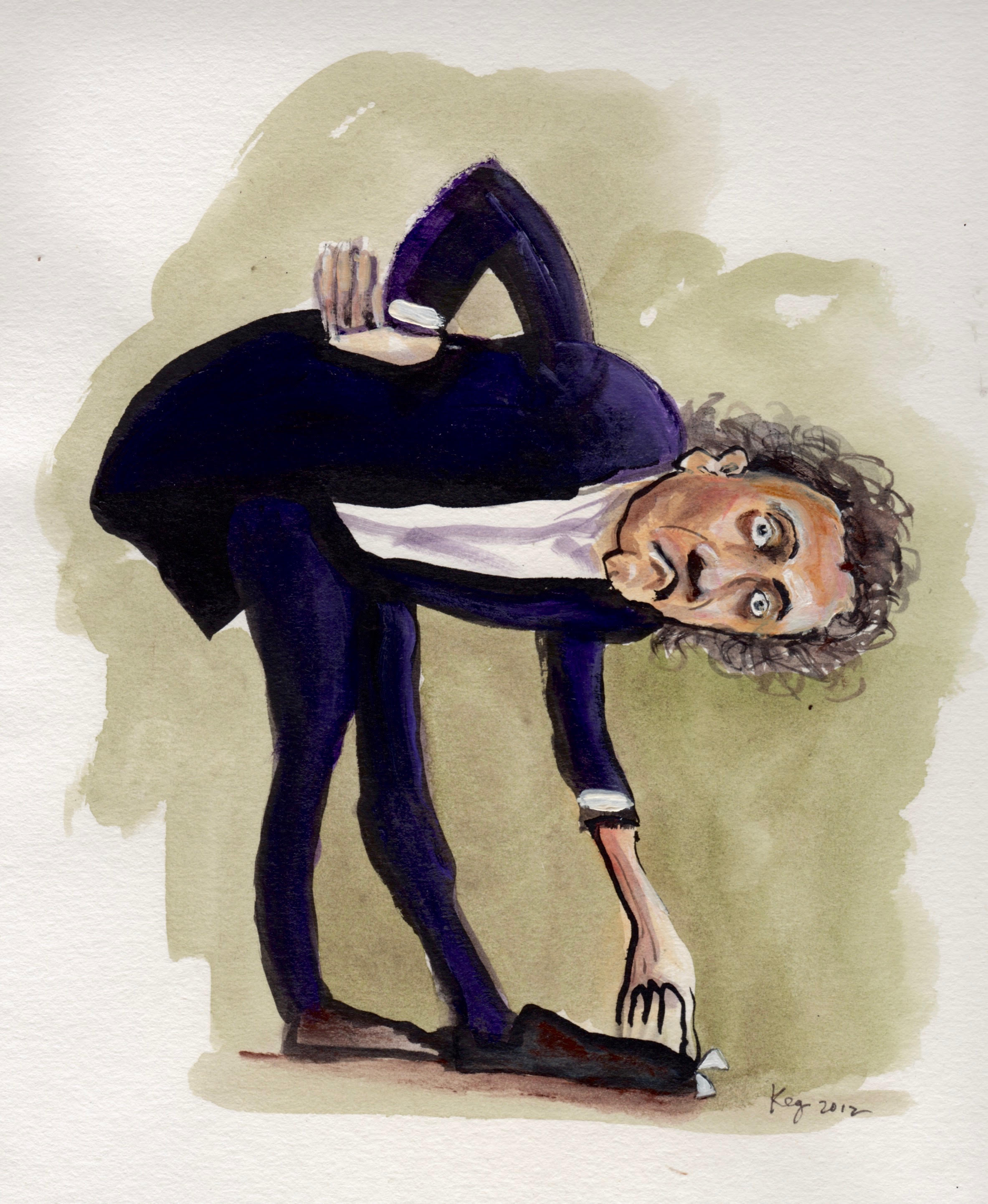 Born in Prague, Tomas Kubinek and his parents fled the Soviet Invasion of Czechoslovakia and settled in Ontario, Canada, when he was only 3.  He fell in love with circus and clowns, began performing as a child and has never stopped, regularly traversing the globe with his imaginative and eccentric solo shows. 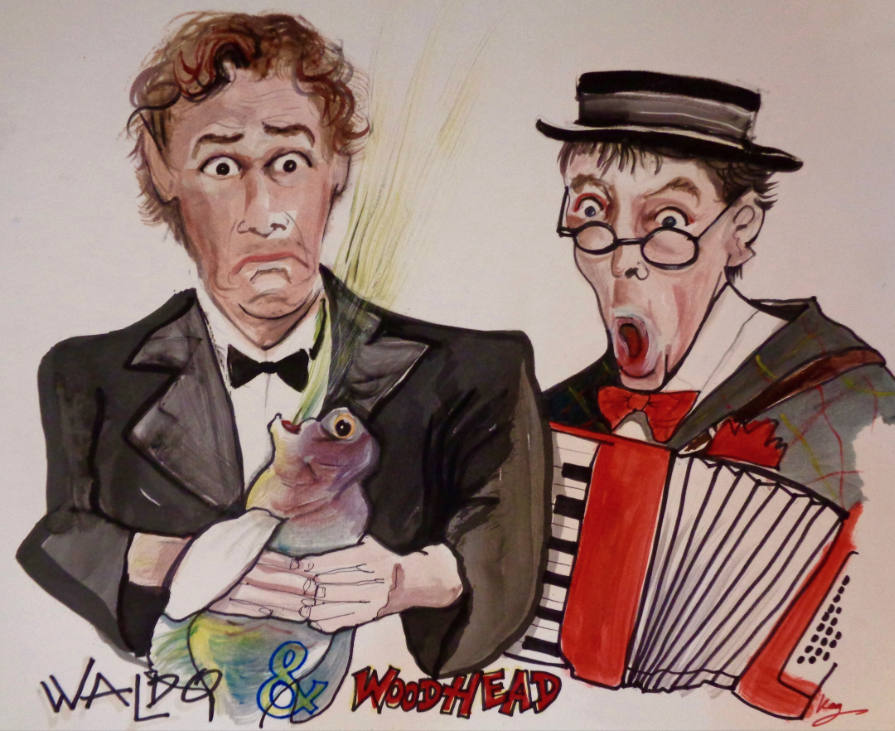 “Waldo & Woodhead” (Paul Burke and Mark Keppel) were a couple of wild and zany guys, whose character-driven physical comedy and strong partner juggling made them a well known performing sensation around the globe. This painting, exhibited at several IJA Conventions, was sold three years ago.

For more information or to see other artwork, visit:

With the exception of “Waldo & Woodhead”, all the drawings and paintings here are unsold and available. Inquiries should be made to: keg37@frontier.com.