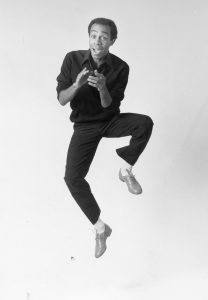 “The Story of Tap…Etc.” is a continuation of a series originally done at Dixon Place for six evenings in 1998 and 2005. It returned for one night in 2015 and comes back again for another night. It is a narrative of tap dance, rather than some definitive history of it. Hank Smith will engage in conversation with performers about tap and associated art forms. Film clips will be shown and the performers will cover different perspectives of experience by telling their stories through words, movement and music. It’s all an improvisation. The story keeps going…

Hank Smith has done mime, clowning, dance, photography, video and television production. For twenty years he was a Stage Manager on Sesame Street, also functioning as Associate Director, Actor and Choreographer. As a tap dancer and educator, he has participated in the NY Committee to Celebrate National Tap Dance Day’s Tap Extravaganza, the Tradition In Tap Experiences, NY Tap City and NJ Tap Festival. His performance work has also been presented in and around the NYC area. A retired Associate Professor Emeritus at Bloomfield College, New Jersey, he has two blogs and is writing a book about his creative journey.

Bernice Brooks has been a professional drummer for over forty years. She has toured nationally and internationally playing jazz, gospel, and blues rhythms, working with Tito Puente, Patti LaBelle and Gregory Hines. She is active in the tap community, drumming for NY Tap City and the NY Committee to Celebrate National Tap Dance Day’s Tap Extravaganza, where she received a Flo-Bert Award in 2015. She is an educator/artist-in-residence in the tri-state area teaching buckets, samba, reggae, traditional drumming and video production. She has a passion for music, working in every genre, her secret to success in a male-dominated industry.

Frank Owens has a vast musical background. He has been the musical director for Johnny Mathis, Chubby Checker, Melba Moore, Johnny Nash, Connie Frances, John Denver, Freda Payne, Ruth Brown, Petula Clark and Lena Horne, to name a few. He was conductor and pianist for the Broadway production of “Ain’t Misbehavin’” and Maurice Hines’ “Uptown It’s Hot” and was also musical director for the first David Letterman Show in 1980, airing mornings on NBC-TV. He is the musical director for the annual NY Committee to Celebrate National Tap Dance Day’s Tap Extravaganza and hosts a weekly open mic run by Cobi Narita.