Jeff Gordon was born in Pittsburgh, Pennsylvania (USA), in 1954. A former All-American Springboard Champion diver, he graduated from Clown College in 1979 and spent the following year somersaulting over elephants at Ringling Bros. and Barnum & Bailey. In 1981, he joined the Big Apple Circus, where he worked on the ring crew. He also appeared as a plant in the audience for the Big Apple Circus’s trio of clowns, Carlo Pellegrini (Carlo), Michael Christensen (Mr. Stubbs), and Barry Lubin (Grandma).

In 1989, in a quixotic attempt to run away from the circus and join a home, Jeff found himself on Broadway, playing The Dean in Bill Irwin’s Largely New York, a role he subsequently played on tour. By 1991-92, however, he was back at the Big Apple Circus, performing in Greetings from Coney Island and, 1992-93, Going Places, a show in which he was the lead character.

Jeff subsequently performed in Asia, appeared with Bill Irwin in the Seattle Rep’s production of Molière’s Scapin, and was for several years “Le Clown Gordoon” at the French Pavillion at Walt Disney World’s Epcot Center. He then moved to San Francisco, where he became involved with the successful Teatro ZinZanni. In 2000-01, Gordoon was again back at the Big Apple Circus, where he starred inClown Around Town with Tom Dougherty.

Jeff later participated in the Tianjin International Comedy Festival in China (2001) and toured with Circus Vidbel in 2004. He has worked extensively in Asia and the United States, and In 2007-2008, he was featured with Zany Umbrella Circus in Amman, at the Jordan’s Children Museum. In addition, Jeff has done many Artist-in-Residencies in the Pittsburgh area, where he now lives.

Thanks to Circopedia for this Bio of Jeff Gordon. A great resource for all things CIRCUS! 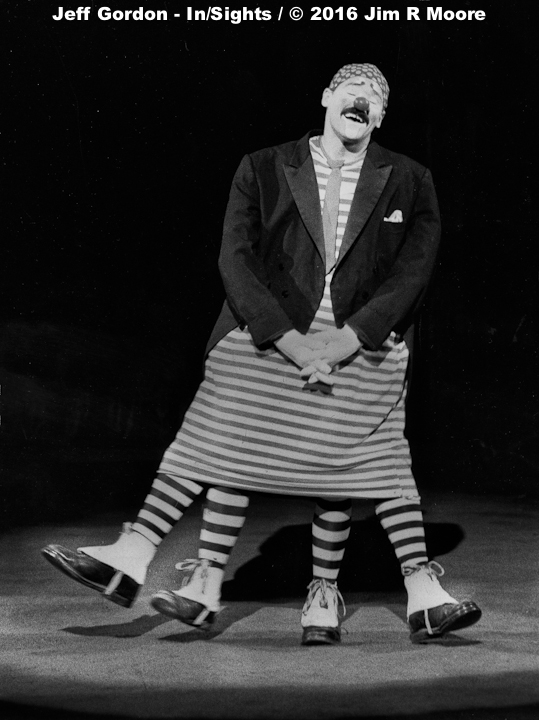