It happened on November 8th, 2011 at the LaMaMa Theater. Celebrating the 50th Season of that institution and Ellen Stewart’s Birthday. 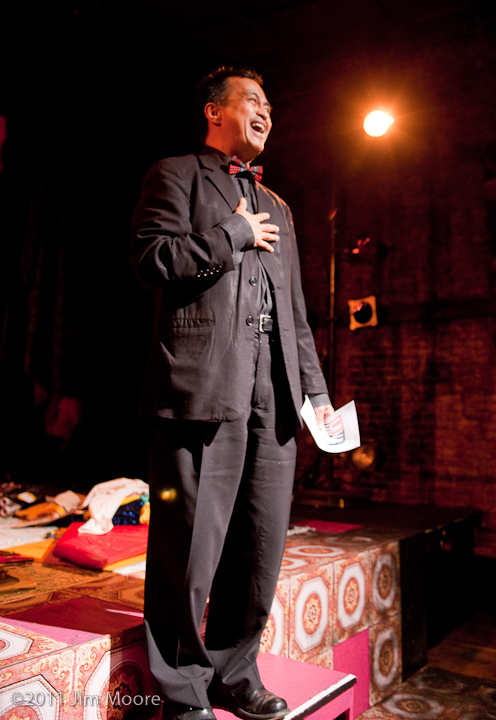 The evening began with a lovely talk by La MaMa’s own Nicky Paraiso. 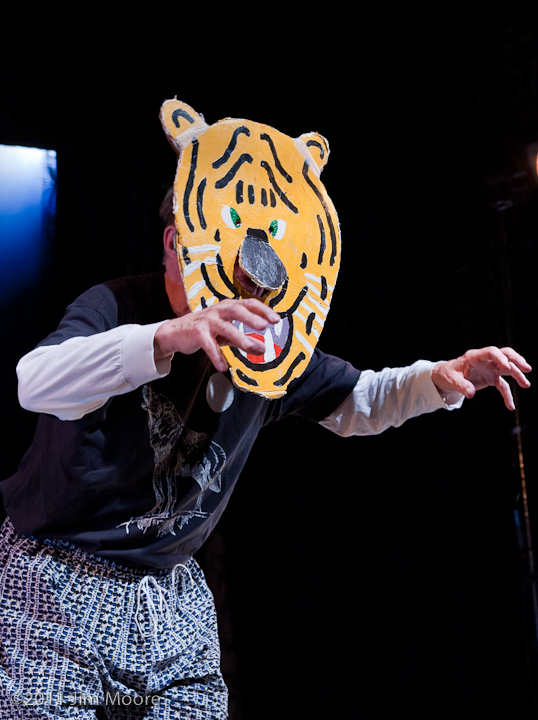 Tom Murrin started the performances with a terrific piece of masks/costumes and political commentary. 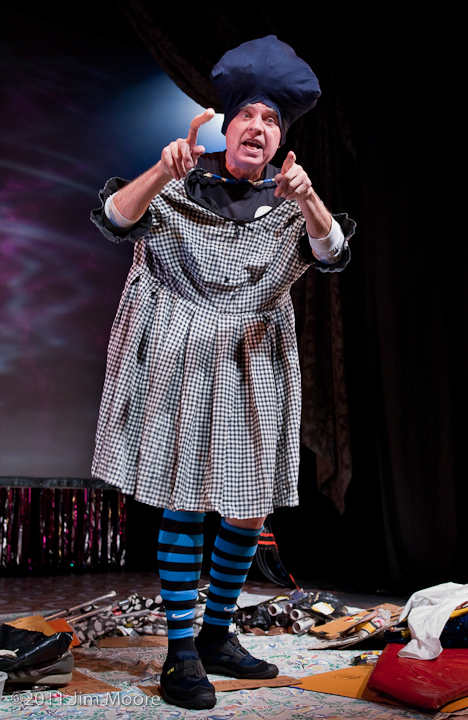 Here he demonstrates the power of the ‘alien’ finger. 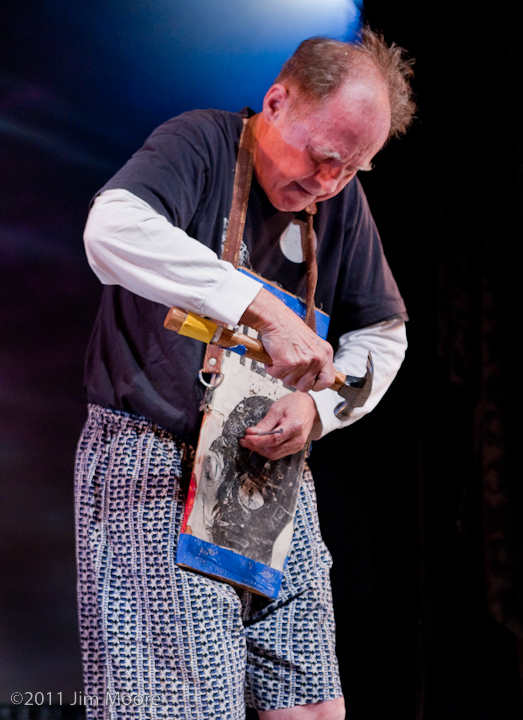 Commenting on the origin of the ‘nailed’ sculptures of African Bakongo tribe he nails himself. 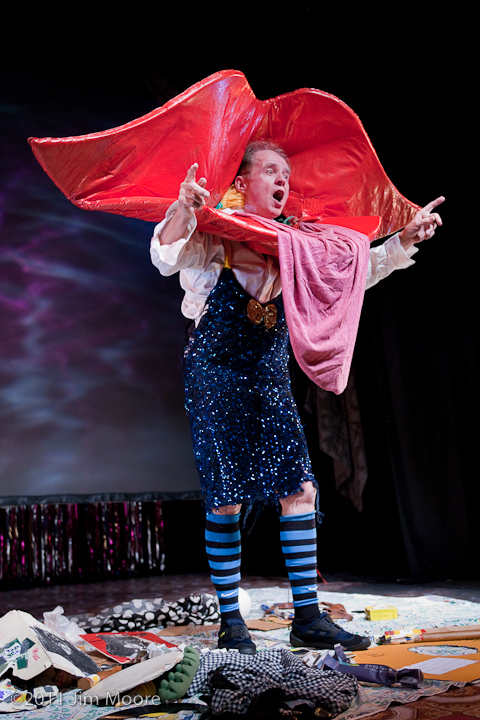 The idea of communicating to the world compassion and love is seen here with a large set of Lips! 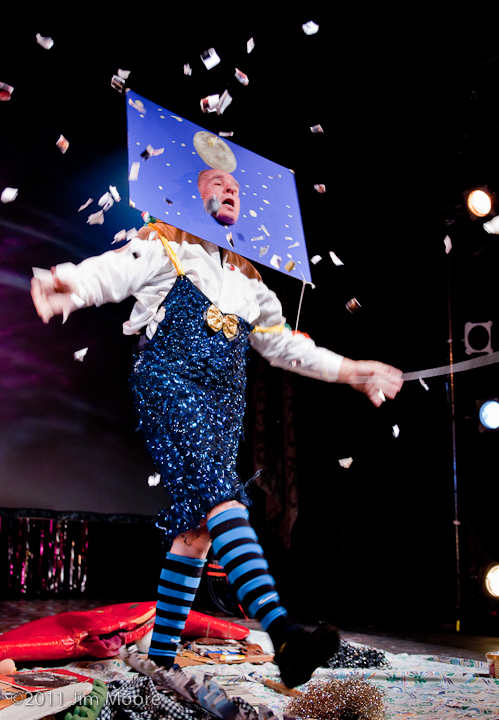 The Moon was a balloon until it was popped here on stage by Tom Murrin in his great fun performance. 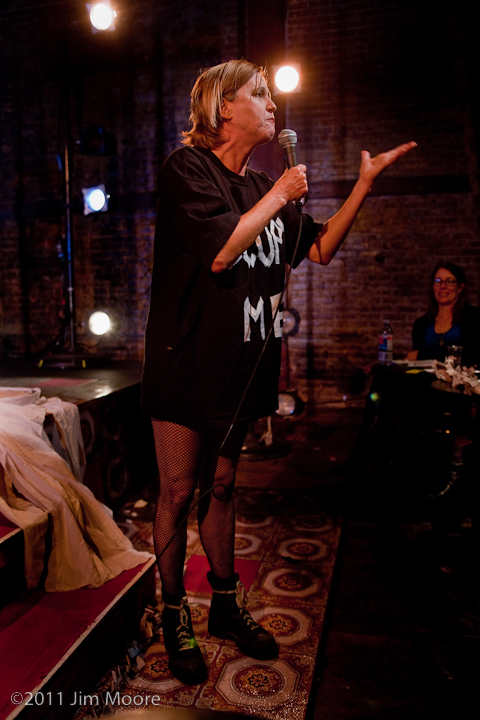 With her ‘Occupy Me’ t shirt Lucy Sexton gives a charged monolog on the current state of affairs. 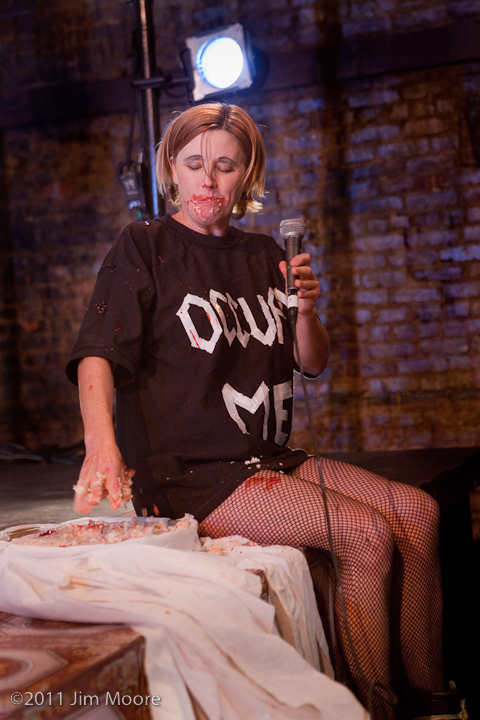 Filling her face with the cherry pie Lucy captivates the audience. 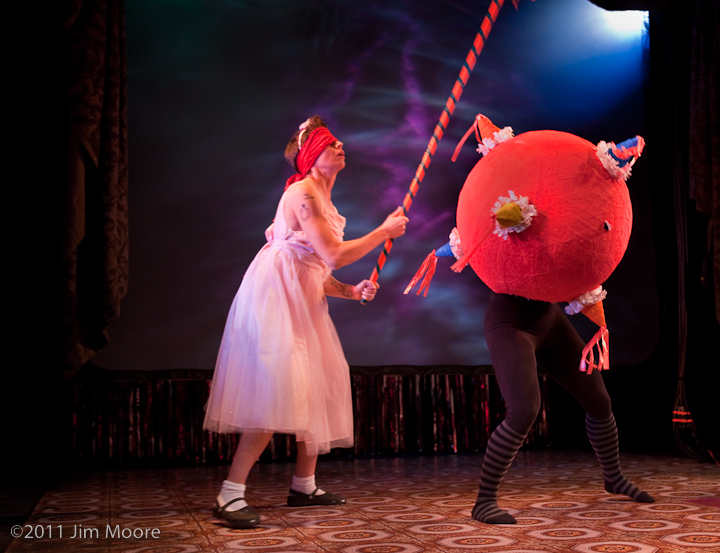 Heidi Dorow and Diana Y Grenier in a ‘pinata’ sketch. 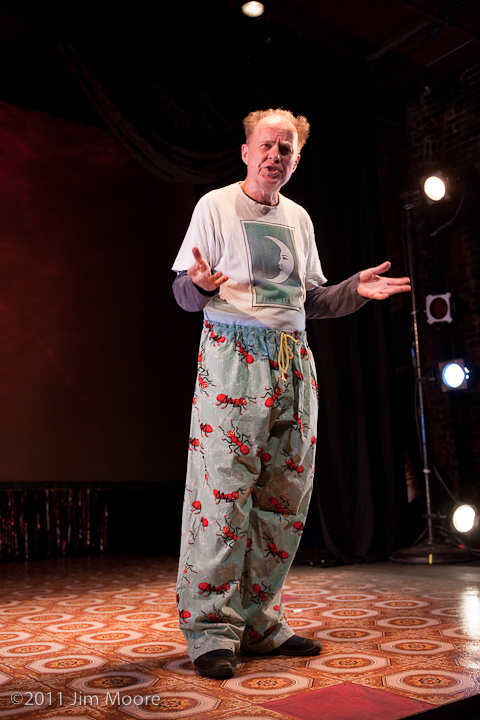 Tom Murrin talks about his first encounters with the LaMaMa founder Ellen Stewart.

THE NAKED LADY with a Couple of Guys 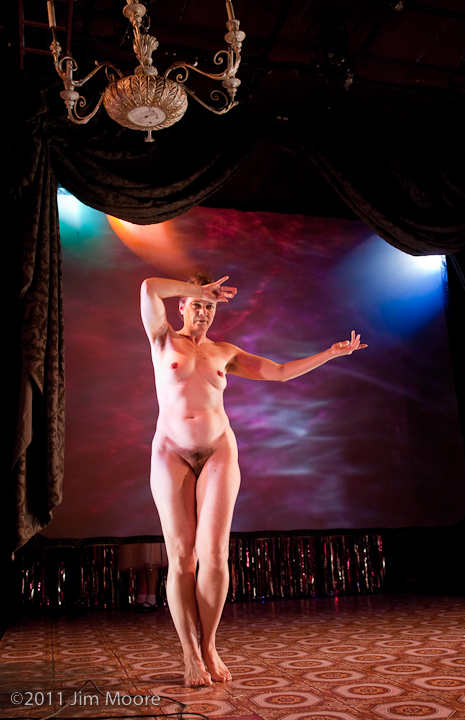 Beginning the piece was The Naked Lady (Annie Iobst) performing a dance under the chandelier. 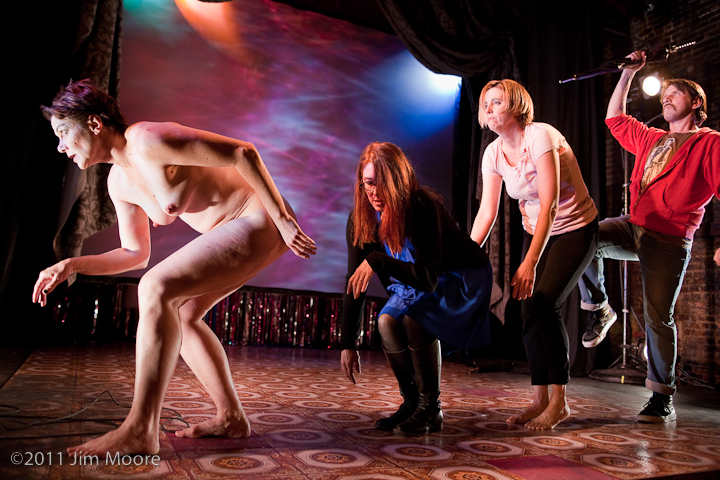 The Naked Lady with Jo Andres, Lucy Sexton and Tony Stinkmetal in a line dance. 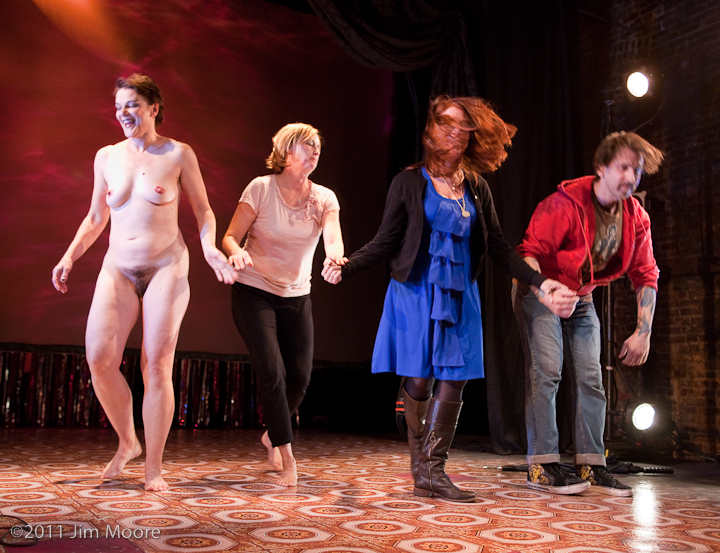 The Naked Lady and Cast members of her piece take a well deserved bow. 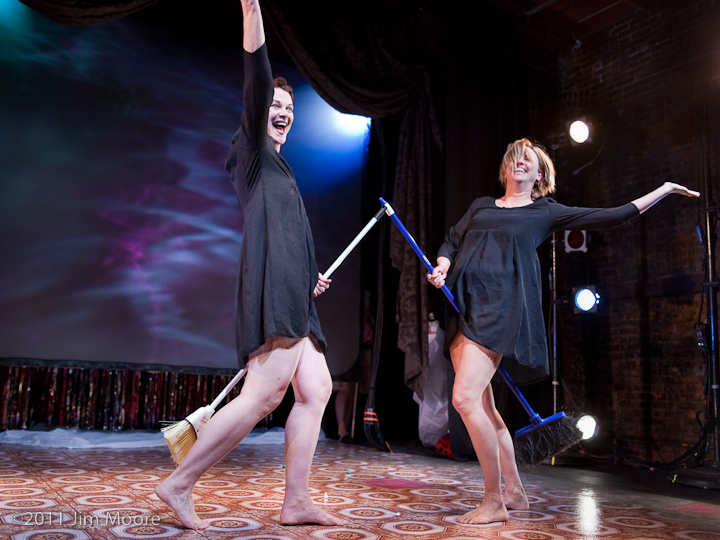 Also in the review was a wonderful music video with music by Mime Goese and Ben Neill and Video by Christophe Thockler.

An incredible film by Jo Andres. 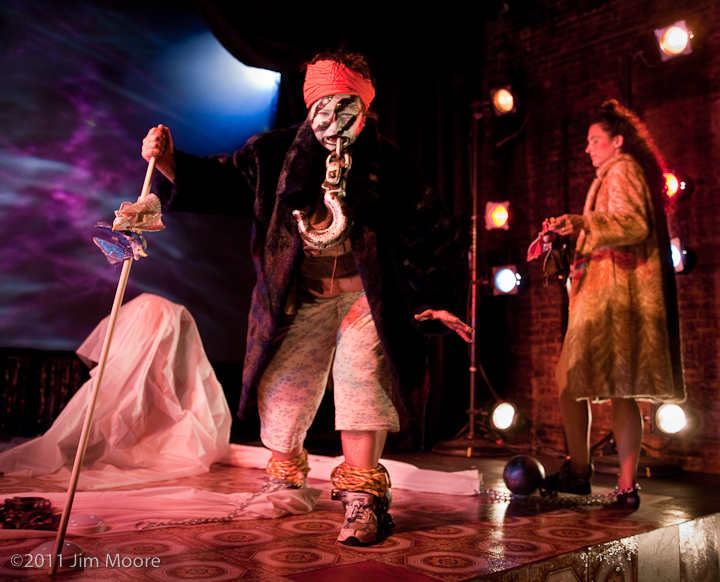 Bringing together a cast of Felliniesque performers including Annie Lanzillotto and Heather Lewerenz was Salley May. 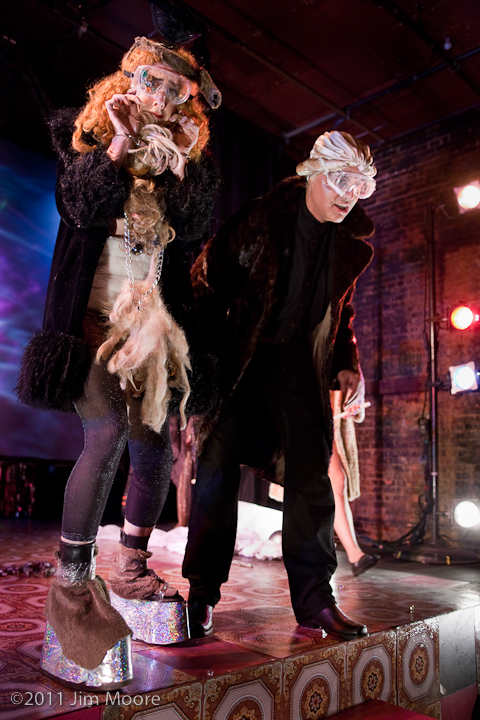 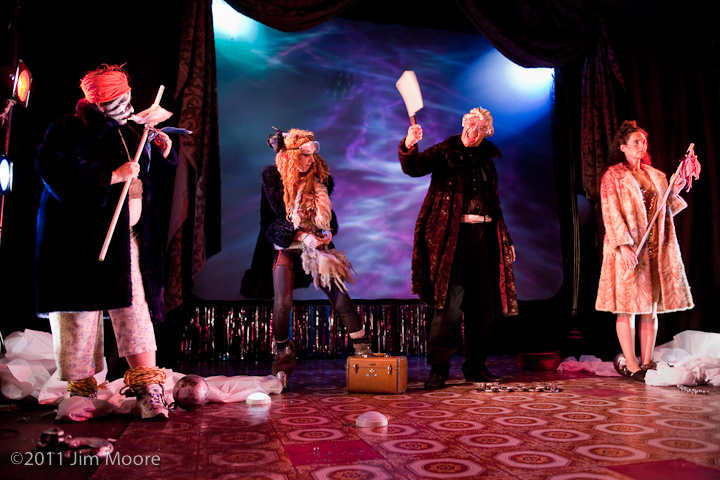 Another wild scene from the Salley May piece. 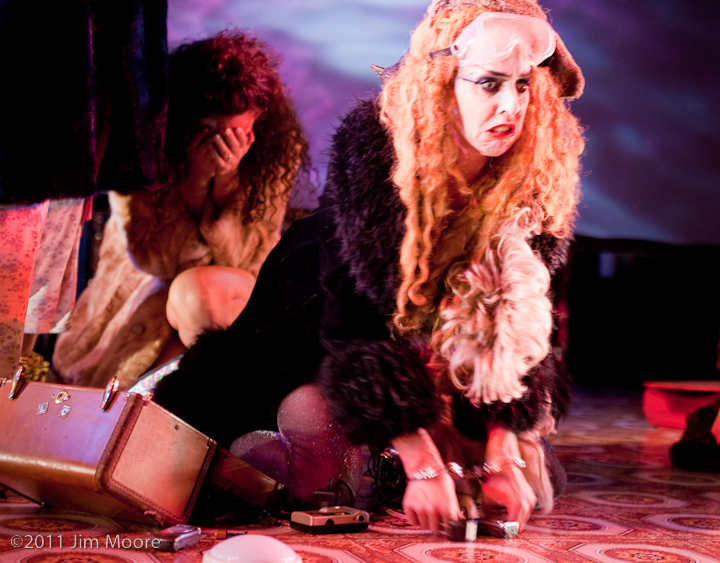 Salley May (with Heather Lewerenz) gathering up her lost possessions. 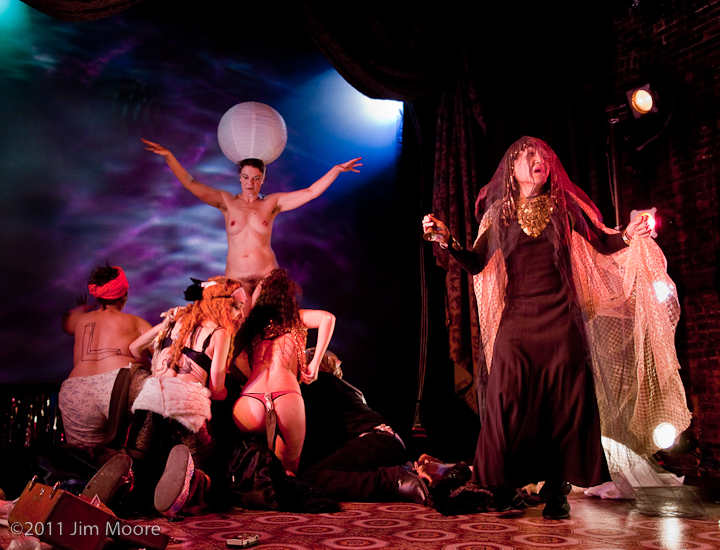 Summoning the spirit of Ellen Stewart (played by Agosto Machado) who spoke so kindly of the people continuing the work she started. 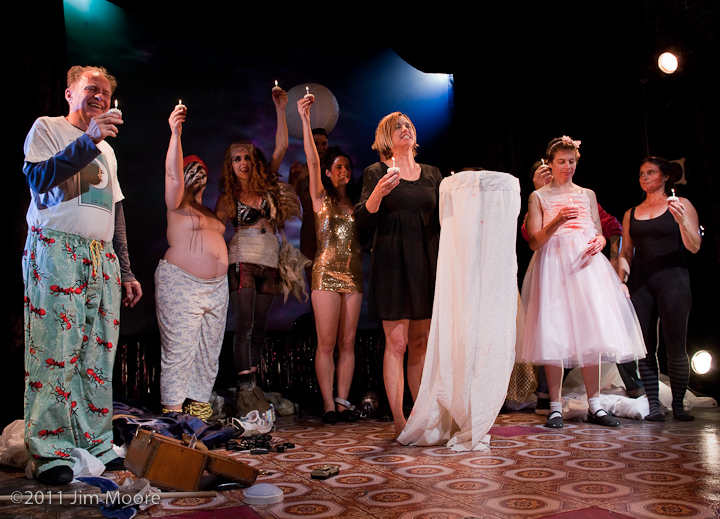 I started doing shows every full moon in Seattle in 1974.  These were comic ritual salutes to Luna Macaroona, the moon goddess, and over the years I’ve done them all over the world, at the entrance to the Star Ferry on Hong Kong, outside Shinjuku Station in Tokyo, and in a public park in Bombay, India.  And I still do them wherever I happen to be.

In the early ‘80’s I met up with 4 women performers, all dance majors at Ohio University, Athens Ohio, who relocated to New York: Jo Andres, Mimi Goese, Anne Iobst and Lucy Sexton, and we did performances and workshops together.  In the mid-80’s Annie and Mimi were living in an apartment on 14th St. near 6th Ave., and on full moon nights we would have performance parties for our friends.  I’d do a full moon salute, Annie would organize a fashion show and we might all end up on the roof dancing in the moonlight.  Our friend Bill Schaffner, a master technician and stage manager, came to one party and afterwards went to Mark Russell, the artistic director of P.S. 122, and asked him if we could do a full moon show at P.S. when it happened that the moon was full and the house was “dark”, or had no other show on.  Mark said, “Sure,” and that was the birth of The Full Moon Crew.

Bill produced all of our shows at P.S. 122.  At each show, over the next few years, the audience would sit in the middle of the room, at tables and chairs, beer was served, and we would set up our acts around the room.  I’d go first and set the tone with a full moon salute to Luna, and introduce the others.  We always had 2 guest acts as well, like Ethyl  Eichelberger, John Kelly, or Steve & Mark (Steve Buscemi and Mark Boone, Jr.).  So there would be 3 acts, an intermission, and 3 more acts.  Mimi would do something frightening, like one night entering from outside the 2nd floor window.  Jo would stage a visual magic show; with dance, music, movies, slides and flowing fabrics. And Annie & Lucy, who performed as DANCENOISE, would always close the show.  Since they almost always ended their act naked, under a shower of stage blood, no one could follow that.

In the mid-‘90’s and after that, I continued doing Full Moon Shows, at various other venues, sometimes with members of the Full Moon Crew, but often with other performers on the downtown scene.  I remember one a few years ago at Dixon Place where my guests were Jonathan Ames, who told stories, Julie Atlas Muz, who did a strip tease inside a huge white balloon, and Mangina (Patrick Bucklew) who wore a plastic bubble over his head which, for a second, became ignited.  Luckily he survived with no injuries.  Luna seems to watch over those who honor her special night.

Nina Conti - Ventriloquist - An interview about her work and life