To benefit the return to the East Village home of PS122!

Written by Eric Bogosian and directed by Jo Bonney…

Below is Eric’s performance in 2010. You can see him NOW at this upcoming Benefit!

Michael Smith is a performance artist/producer/performer and now a professor at a university. In the late 1980’s he hosted and performed in his MIKE’S TALENT SHOW. It was hosted at The Bottom Line and for a short time at Caroline’s at South Street Seaport.

During this time he had many amazing performers/writers/eccentric acts on his stage. Eric Bogosian was working on his show SEX DRUGS AND ROCK n’ ROLL. Here he is performing a segment titled ‘DIRT’. In my book IN/SIGHTS he wrote a few paragraphs(quite a few!) to accompany this photograph. Here is a brief excerpt.

“This is a picture of me performing a segment entitled “Dirt” of the new solo I’ve been working on called SEX, DRUGS, AND ROCK n’ ROLL,

With this work. like the other solos that I have done, I’m working  in segments which I hope form a collage that becomes a meditation on a subject. In this case, the subject at hand is the phrase Sex, Drugs, and Rock n’ Roll and all it implies about a crazed over-the-top, high speed world that we live in and “what’s so desirable about that anyway?” 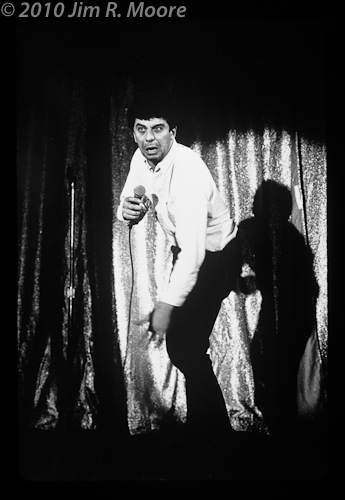