Being in the Guinness Book of World Records twice isn’t enough for hula hooper Dunja von K. In between performances and teaching hoops three times a week, she’s in training for her third world record – being suspended upside-down hula hooping with multiple hoops.

She failed by a narrow margin in her first attempt a few months ago. “I can do 10,” she revealed, “but I needed to do 20 with a minimum of 3 rotations. I failed by half a rotation.” She is trying again before April to be in the next book. Out of the 40,000 record holders in the Guinness World Records database, only about 10% are published in the book, and even a smaller number are featured with a photograph. Dunja is in the 2019 book with a photograph and she is determined to be in the 2020 book.

She wasn’t born with a hoop on her hip. Hailing from a small town in northern Germany, she didn’t pick up a hoop until after she moved to London.  There, she got involved in theatre to improve her English, but this didn’t entirely satisfy her penchant for the weird and unusual. Through a workshop at the Roundhouse, she discovered that cabaret was more her métier. Then she saw that the Roundhouse was offering a hoop workshop by the legendary Marawa the Amazing. “I took the workshop for fitness,” she confessed, “I never thought I could do any hoop tricks.” 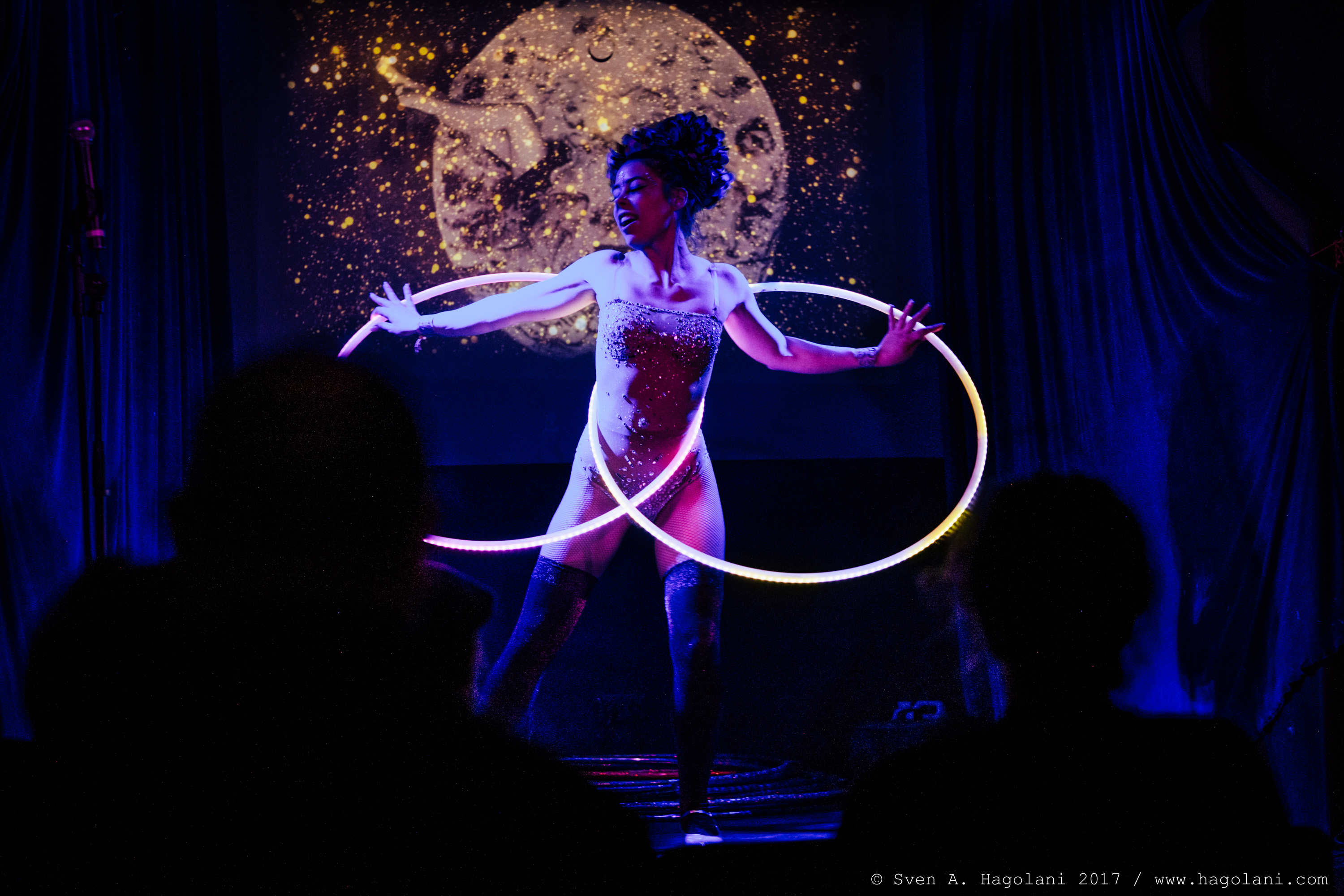 With the encouragement of Marawa, she persisted in hoop training and her efforts resulted in her becoming one of the original members of Marawa’s Majorettes. She performed at the Olympic Games in 2012 and then at Glastonbury Festival, Bestival, the Secret Garden Party, and at Kensington Palace.

As part of Marawa’s Majorettes, Dunja was one of the ten women who collectively rotated 299 hoops and set a World Record for the Most Hoops Spun by a Group. Then she decided she wanted a World Record of her own and got one for spinning 43 hoops on multiple body parts. She has since broken her own record by spinning 59 hoops.

After nine years in London, she decided to move to Berlin. “I felt like I couldn’t go any further in London. I wasn’t really growing anymore,” she stated and adds with a laugh, “I also wanted my own flat.” In Berlin, she teaches hula hoop workshops three times a week and performs at burlesque clubs and major events. “If I would’ve known how great the scene was in Berlin,” she said, “I would have moved earlier.”

Her acts are different than other hoopers who create routines to show off their skills, “I come from a theatre background and a cabaret background,” she explains, “Usually, my hoop acts tell a story. It’s not just amazing tricks.”

Most of her storytelling has a sense of the macabre that fits well with Berlin. In one act, she is a bloody Jesus with barbed wire wrapped around a hoop. Another act is a frenetic hooping homage to Pulp Fiction complete with a tray of cocaine. Though she can spin 80 hoops at once and simultaneously keep hoops going on all four limbs, she continually looks for ways to expand her skills. She started training in aerial silk and now has a silk-and-hoop act where she is a spider.

But one of her favorite activities is hula hoop training. “I love teaching beginners who never thought they can hoop, because I felt like that,” she said, “It took me three months to keep the hoop up. I was really shit in the beginning.” From one beginners class in Berlin, her workshop series has now expanded to three classes per week and the addition of an intermediate hoop class.

Back in London for Full Moon Cabaret at the Vault Festival this past weekend, she strutted on stage with heart-shaped hoops in her high-energy Summer of Love act. Then she picked up four LED hoops and the audience went wild as the lights went off, leaving nothing other than the psychedelic flashing pink, yellow, and green lights of the hoops. For a grand finale, she picked up a massive stack of hoops and gleefully flung her arms up, wildly gyrating all the hoops at once. Revolutionary in more ways than one, Dunja von K is sure to set several more world records.