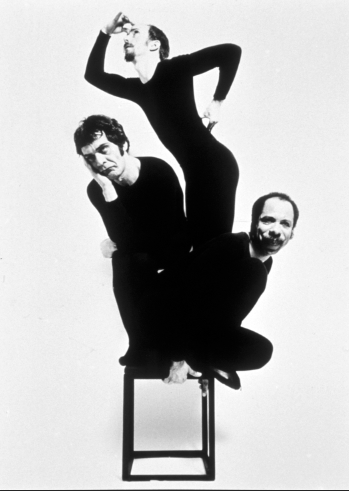 The photograph was taken at The American Mime Theatre Studio.

The American Mime Theatre, Company and School, New York City, celebrated their 65th Anniversary on  April 7, 2017.  It all began in 1952 when a young 24-year-old, Paul J. Curtis, graduating as a theater Director from the Dramatic Workshop of the New School for Social Research (NYCity) and trained by Erwin Piscatory.  He went to Europe to explore different theater forms and he was disturbed by the arbitrary separation of acting and dance.  Returning to the United States, he thought it would be interesting to present to American actors a project of Mime to demonstrate its potential and to correct the limitations of the medium practiced by the French School of Mime.  Forming a Company of 5 actors and 5 dancers they began to work on the project and created a Repertory of plays to present their new works in a concert at the 92nd Street Y, New York City.  The audience’s response to the concert was strong, and the Company decided to continue with the work (creating plays for a Repertory and codifying the teaching methodology of this new kind of Mime, a performing art, which would be named “American Mime”.

'The Handsome Little Devils' at Barfly in Denver, Colorado