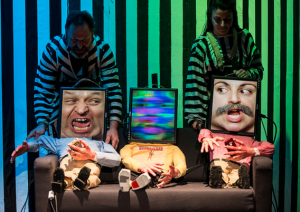 In Commander/Ramirez’s video-puppetry extravaganza STEVE OF TOMORROW, a couch surfing time traveler Steve appears at a cramped apartment shared by sci-fi blogger Ralph and his partner Scott. Steve lands in the middle of a media frenzy surrounding a corporate-produced hurricane. What ensues is a split-screen dark comedy about miscommunication in the age of ever-present media and a democracy interrupted by a flurry of pop-up windows.
“I wanted to make a show about how every step into the future seems to divide us, especially now that anxiety has taken a hold on the nation. I want to tell this bleak story using puppets, of course,” says Commander of his 2015 production which strikes a timely chord in the age of Donald Trump. 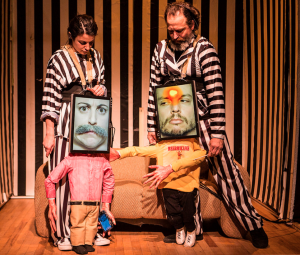 Hank Smith - "The Story of Tap" at Dixon Place

Vaudevisuals interview with Gary Ferrar – ‘Nothing Here is Real’.