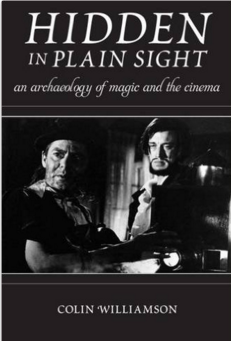 Williamson offers an insightful, wide-ranging investigation of how the cinema has functioned as a “device of wonder” for more than a century while also exploring how several key filmmakers, from Orson Welles to Christopher Nolan and Martin Scorsese, employ the rhetoric of magic. Examining pre-cinematic visual culture, animation, nonfiction film, and the digital trickery of today’s CGI spectacles, Hidden in Plain Sight provides an eye-opening look at the powerful ways that magic has shaped our modes of perception and our experiences of the cinema.

“Fresh and intriguing, Hidden in Plain Sight offers a wealth of fascinating historical information on the myriad ways and contexts in which moving images have evoked experiences of wonder from audiences. Williamson’s interest in the material is infectious.”

—Stephen Prince, author of Digital Visual Effects in Cinema: The Seduction of Reality

“In answering questions that date back, at least, a century in movie-making, Williamson looks at how movie magic has inspired people to learn more about the techniques and technology behind the images. “
—Flicksided
Purchase the book here.