Minnie Woolsey (1880 – after 1960), billed as Koo-Koo the Bird Girl, was an American side show entertainer, best known for her only film appearance in Tod Browning‘s film Freaks in 1932.

Minnie was “rescued” from a mental asylum and was referred to as Minnie Ha Ha in her sideshow entertainment career.

She suffered from a rare congenital growth skeletal disorder called Virchow-Seckel syndrome, which caused her to have a very short stature, a small head, a narrow bird-like face with a beak-like nose, large eyes with an antimongoloid slant. Bald, toothless, and either completely blind or very short-sighted. She would appear in a Native Indian American costume and speak gibberish.

Sarah steps into her shoes and re interprets the scenes from the original movie called Freaks a controversial film which was released in 1932 but was banned for 30 years. 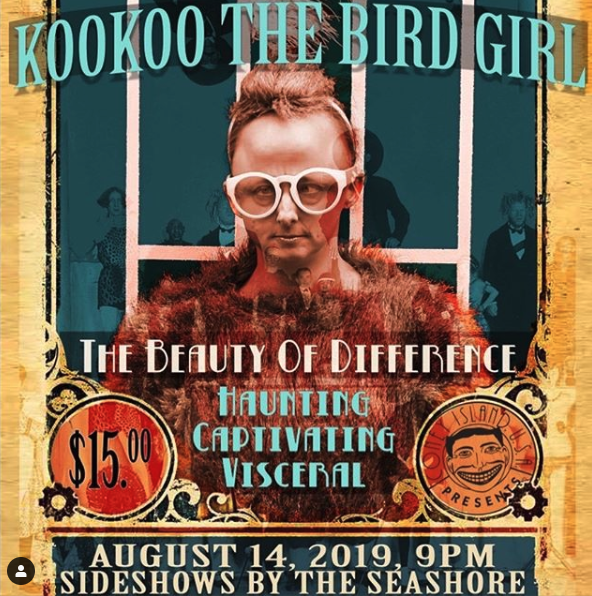 Sarah told the story of Minnie Woolsey and using slides and film recreated the act that Minnie performed at Coney Island in the early 1900’s plus her own wonderful routines.

Hosting the show was Xander Lovecraft.

Xander opened the show with the classic sideshow ‘blockhead’ routine. Hammering a nail into his skull!

Hanging on her hoop blindfolded over the bed of nails!

Sarah needs your help to get her show to the festival!

Vaudevisuals interview with Tammy Faye Starlite - 'Why'd Ya Do It?'

Vaudevisuals Bookshelf - "Make My Day: Movie Culture in the Age of Reagan