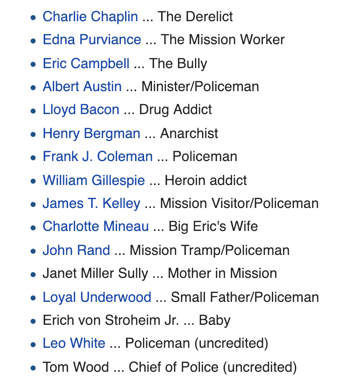 A reviewer from Variety wrote, “The resultant chaos and several new stunts will be bound to bring the laughter, and the star’s display of agility and acrobatics approaches some of the Douglas Fairbanks pranks. Chaplin has always been throwing things in his films, but when he ‘eases’ a cook stove out of the window onto the head of his adversary on the street below, that pleasant little bouquet adds a new act to his repertory. Easy Street certainly has some rough work in it–maybe a bit rougher than the others–but it is the kind of stuff that Chaplin fans love. In fact, few who see Easy Street will fail to be furnished with hearty laughter.”