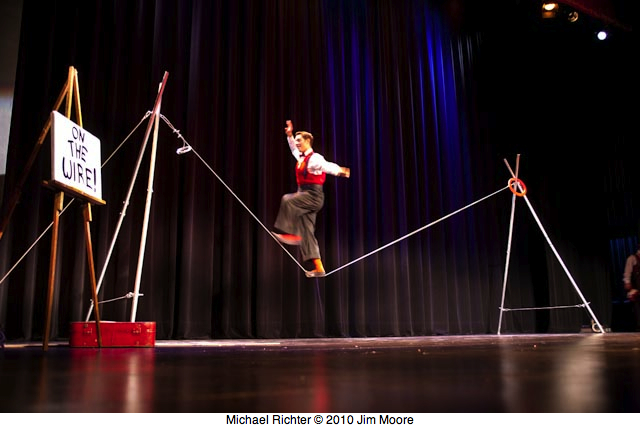 Had fun at the Big Apple Circus and found Joel Jeske after the show chatting with BAC’s favorite grandma!

This past month there was a wonderful show which actually happens every month. The New York Downtown Clown Revue. When most people think about ‘clowns’ they have this image pop into their head.

The American public has had almost no exposure to the true ‘european’ style clown. This Bozo image has been popularized by the Ringling Bros. & Barnum and Bailey Circus and other American circus shows traveling the country for almost 100 years. Most graduates from the Ringling Brothers Clown College (no longer in existence) are required to wear a certain type of clown costume if they make it to the ranks of the Ringling Bros.& Barnum and Bailey Circus. The impression one gets is that this is either ‘family’ or ‘child’ entertainment. Unlike Europe where they have beautiful theatres devoted to serious ‘clown theatre’ where adults attend without the little ones in tow.  There is a tradition of ‘types’ of clown which goes as far back as the greeks. Author/historian/professor John Towsen could tell you more about ‘history’ of clowns in his wonderful blog and his book CLOWNS. In this interview with the trio Le Fromage Royal all three participants talk about their influences on this ‘new’ old skit.

The evening wasn’t by any means just the Fromage Royal dudes.

Check out the NY Downtown Clown Revue BLOG to see.

Paul Zaloom had much experience performing before he started his one-man shows. He was the ringmaster for the Bread and Puppet Circus in Vermont every summer for years. He started performing with them at the age of 19 and still does when he is in Vermont.

Paul Zaloom and I started working together on making pictures for his puppet shows in early 1978. The first of the shows we worked on was “The World of Plastic”. Paul has a very individual style to his work and it wasn’t difficult to carve photographs out of his shows that were very representative. His bulging eyes and expressive face lend themselves to very funny and theatrical images. It seems that the New York Times and other papers in NY were very appreciative of my style since they could use them in any way they wanted graphically on the pages of their paper.

Our next project was for his show in 1981 titled ‘Zaloominations‘. We decided to be a little more playful and use some more drastic lighting to accentuate the event at hand. The piece is called Industrial Park. Here we have Paul with a semiglobe hat and plastic exhaust piping that has a puppet lobster claw with binoculars. A stunning image that was used many times in the media.

The next show was titled CRAZY AS ZALOOM and the piece we did this photograph for was “In The News“. A few of the topical issues in the news in 1982 included pollution, internet and garbage. Paul was savvy in using found objects that reflected these issues in his shows. We wanted to get across the absurd and yet important issues by using these objects from the show in the photographs. A lot of times these visual images never appeared  in the show in the  same configuration as they did in the photographs. They were created custom for the photographs with Paul and I brainstorming for hours together to get the right look.

The following show Paul ask that we do a specific image for the flyer. He knew exactly what he wanted for the show and we set out to create a visual that worked for his concept. The show titled CREATURE FROM THE BLUE ZALOOM was presented in 1984. We set up a table top and seamless paper on top of it so Paul could ‘cross the desert’ in the studio. With pith helmet and the dehydrated look on his face we came up with this picture.

At the same session we did another series of photographs for his piece titled BASIC INTELLIGENCE. Here Paul dressed up as a Russian soldier with cigar and moustache drinking a glass of ‘whoknowswhat’?

As we worked more and more together we really did get good at making wonderful potent images that sold the show and his ideas.

In 1986 we worked on his show THE THEATRE OF TRASH. This photograph was from his piece In America. I really liked this image as it had a feeling of horror mixed with scifi.

In 1991 we worked on his show MY CIVILIZATION. Here we used many different techniques to create the images. Backscreen projection, and other technical changes from our usual bag of tricks. Here is Paul with student learning and READING the ABC’S.

Paul moved to Los Angeles around 1998 and started working on a new TV show called BEAKMAN’S WORLD. It was a delightful cross between Mr. Science and Pee Wee Herman’s. Of course Paul was Beakman. Based on a very successful comic strip of the same name. It was very successful show and  there is a ‘Best of Beakman‘ on DVD.

Today Paul is creating more wonderful shows and hopefully we can work again on some inspired images. Here is a excerpt from one of his shows posted on YouTube.

While I was doing some research photography on top of the South tower of the World Trade Center (for his upcoming coup) I got Philippe to hold my camera while I did a handstand on the edge. I wasn’t really afraid of this as I had my handstand down and I am not afraid of heights. It was an amazing moment to be on the NY’s tallest building and be doing a handstand on the edge of the roof. No one was around and it was a serene and tranquil moment. The photographs that I took that day became the documentation that was eventually used in the Oscar winning documentary Man on Wire.

Francis and Lotte Brunn joined Ringling Bros. show in 1948 when they first came to this country.  They worked the Ringling show for 2 seasons and then went to the Pollack Bros. Circus. Lotte met her future husband at the Pollack Bros. Circus in 1951 and then left Francis with the circus and went off to get married and start their own careers. Here is a picture of Lotte with legendary Ringling clown Emmett Kelly. (Thanks to Michael Chirrick for this!)

A couple for the New World Order 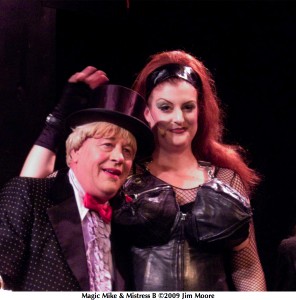 One of the funniest acts I have seen and enjoyed is Chris Allison’s side show freak CONEY ISLAND CHRIS. He mixes the zany attitude of the likes of Jerry Lewis’ nutty professor and Pee Wee Herman with a glass eating, finger in a rat trap, silly costume and hysterical facial gestures Coney Island simple guy trying to learn the ropes of sideshowville. Coney Island Chris made it to the finalist on AMERICA’S GOT TALENT.

On the upper part of Lafayette St is the wonderful Astor Place Theatre. Everyone thinks that The Blue Man Group made this place what it is today.  NO! I was there back in 1966. The FUGS were the music and literary talents of Tuli Kupferberg and Ed Sanders along with other musicians. See their site at  www.thefugs.com 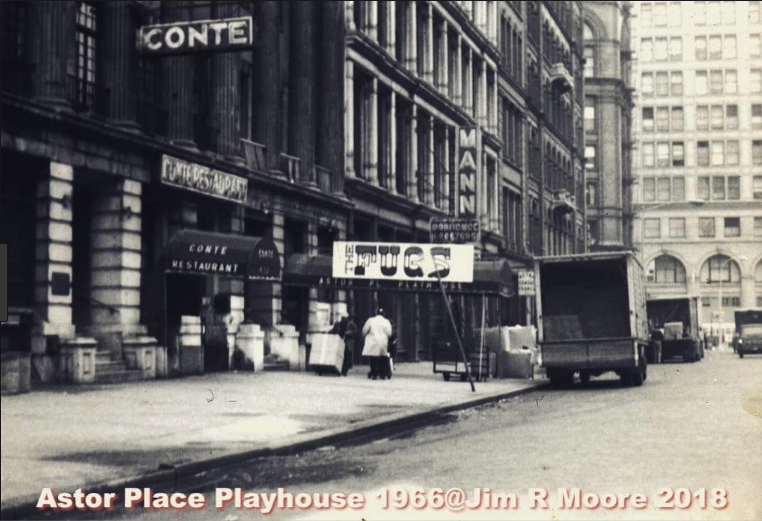