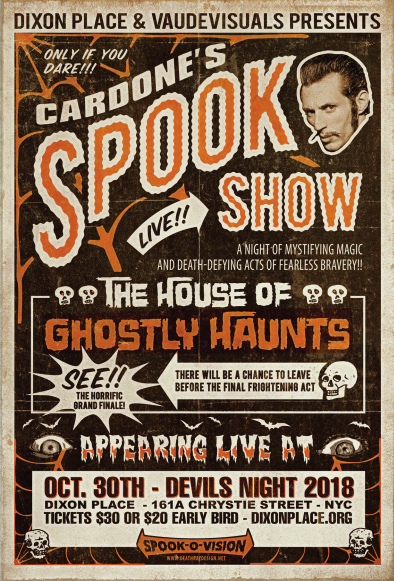 ~  The House Of Ghostly Haunts ~

Just in time for Halloween, Dixon Place and Vaudevisuals present legendary punk rock magician Cardone in his vintage spookshow The House of Ghostly Haunts. The show will be performed for one night only on October 30, 2018. 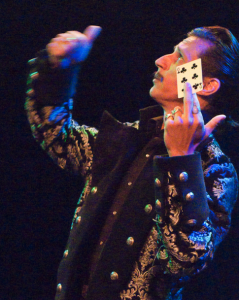 A master magician with remarkable sideshow flair, Cardone moves seamlessly from magic to mentalism to ventriloquism, offering an unforgettable evening of astonishing illusions and a few spine-tingling scares. The show revives the spookshows of yesteryear for a 21st century audience, with Cardone swallowing razor blades, escaping from a strait jacket, and performing dangerous feats and astounding acts of prestidigitation before unleashing a parade of poltergeists in a spooktacular blackout finale. 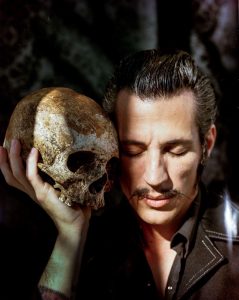 Begun in the 1930s by the magician Elwin-Charles Peck, early spookshows turned spiritualism into and evening of entertainment. Instead of a serious attempt to communicate with dead loved ones, the illusions associated with spiritualism were presented as eerie tricks and harmless scares. Later, spookshows moved to movie theatres and started riffing off of B horror films and monster movies. Spiritualist hosts were replaced by mad scientists and spookshows became more gruesome with decapitations, limb severing, and impalement. By the 1960s the gimmicky tricks of the spookshow started to seem quaint, and after The Exorcist, the nature of horror movies changed dramatically. Audiences disappeared and spookshows vanished from popular entertainment.

Cardone is an award winning magician, escape artist, and ventriloquist. The first person to perform the deadly Milk Can Escape at Coney Island USA, he was inducted in the prestigious “Order of Merlin” from the International Brotherhood of Magicians.

An artistic incubator since 1986, Dixon Place is a Bessie and Obie Award-winning non-profit institution committed to supporting the creative process by presenting original works of theater, dance, music, puppetry, circus arts, literature & visual art at all stages of development.

Vaudevisuals.com celebrates the eccentric performance arts and is led by Jim Moore an American photographer who has documented the variety arts since the 1970s. His photographs helped Philippe Petit plan his tightrope-walking stunt between the Twin Towers of the World Trade Center in 1974 and were prominently featured in the Oscar-winning film Man on Wire. In November, “Vaudevisuals.com”, the chronicle of ‘eccentric’ performing arts will be 9 years old.