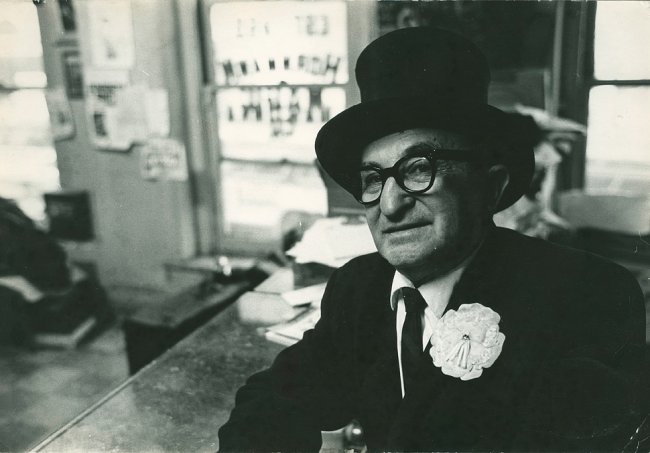 AL FLOSSO’S NAME is known to readers of the two-volume graphic novel by Jason Lutes who created a character solely upon the basis of a photograph and this magician’s colorful name. Readers of an earlier era of fiction writing recognized aspects of Al Flosso’s true nature in the character, Professor Flotto in the pages of The Great Balsamo, the novel by show-biz author Maurice Zolotow. The true-life Al Flosso (1895- 1976) was as memorable a character as any created in fiction or prose. 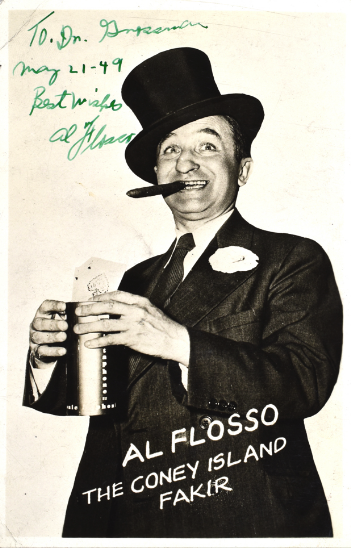 A city native, he later spoke of crossing the Roeblings’ Bridge to get to downtown Manhattan and buy a ten cent pulp-paper booklet of magic to learn at home. Next, he ventured into New York City’s midtown tenderloin district where he purchased a ‘barber-pole’ production effect at Martinka’s Magic Emporium of which he would later – like Carter the Great and Harry Houdini before him become the proprietor.

In his early “kid” days he associated himself with the legendary Max Malini (1873 – 1942) who, like Flosso, was a diminutive man with a striking oversize stage persona and an inspired knack to captivate audiences through the sheer force of his personality. 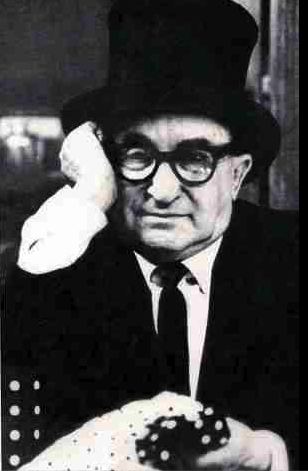 Next came his yeoman stint at Coney Island where he performed his rendition of ‘The Miser’s Dream’ in an uncanny act of sideshow flare; this performance was an unforgettable admixture of high magic technique and sidesplitting comedic bravado. 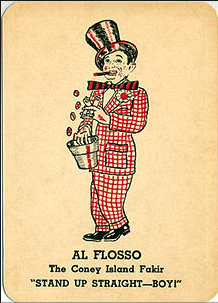 Of this work on his part showbiz legend Milton Berle dubbed Flosso, “The Coney Island Fakir,” and this salutation became the sobriquet that stuck.

Professionally he also explored the worlds of traveling sideshow circuses and vaudeville circuits. including split weeks in New England towns. Back home in New York, he purchased and presided over Martinka’s Magic Emporium, welcoming visitors with his warm, self-effacing greeting, “So you’ve come to see the Little Man!” 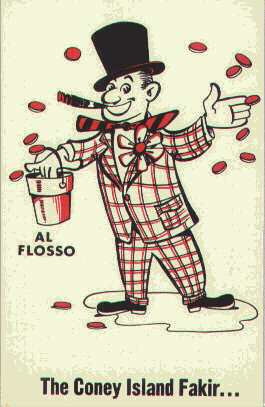 Later on, he performed on television and Catskill resorts with cyclonic vigor. His friends in the worlds of theater and magic were legend, from Houdini to Dunninger to the youngest aspirants of his beloved art of magic. Like his father-in-law, Professor Louis Krieger, Flosso had busked for the sidewalk gamins of the Bowery and for the members of New York Society’s “Four Hundred”.

He was engaged to improve Ambassador Joseph Kennedy’s manual dexterity as part of physical rehabilitation when Mr. Kennedy was at the Rusk Institute in Manhattan. 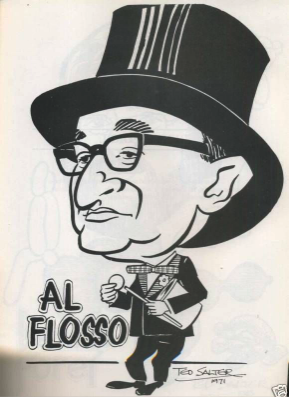 Unlike the broken character in Mr. Luter’s fictional ‘Jar of Fools‘, the true Al Flosso was a sober, and ever-alert, participant in the human condition until his last days, captivating all comers with his signature styles of magic, mirth, and mystery. Until his death in 1976, Al Flosso regaled audiences with his antic force, a quality very akin to the ‘Rough Theater,” as described in Peter Brook in his seminal text, The Empty Space. This theatrical genre acts as a cultural antidote to those denatured commercial amusements flooding the mass society which Brook designated “The Deadly Theater.” Flosso, the antic force to behold, was, indeed, the quintessence of that liveliest authentic theater which is always integral to the lively arts.